Take A Walk on the Pierre

I know a lot of people were expecting a HUGE Buy Low/Sell High similar to the one I did back in Week 3/4.

*Buy Low candidates all got injured outside of SJax & Lacy*

Now it is time to make up that time and give you a WR you can buy very low on. Coming into the season Everyone was all over Pierre Garcon as a potential top 15 WR. Everyone loved that RGIII viewed him as the go-to WR in the offense because he was the go-to guy for the entire career of RGIII. This was obviously not the case as Gruden designed the offense for Desean Jackson to play the role of AJ Green, similar to his setup when he was the OC for the Bengals.

When RGIII was injured in Week 2, we expected Captain Kirk Cousins to find Garcon often as they had a nice connection over the end of last season. Instead, Garcon only had one big game Week 3 with Cousins, and his next big game came on one Colt McCoy pass that Garcon took the distance himself for 70 yards. First game back for Garcon/RGIII did not work out well for Garcon who only had 3 catches for 15 yards. Now is the perfect time to Buy-Low. 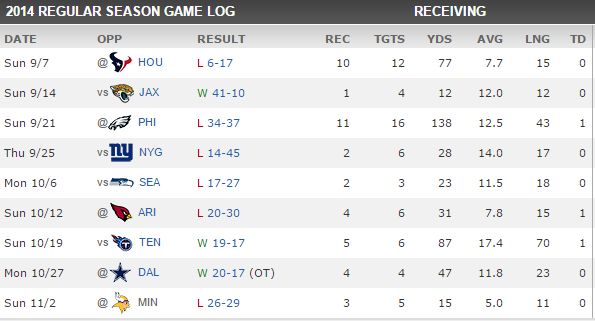 The Schedule really opens up for the Redskins to close out the season, and the NFC Wildcard is still up for grabs as the NFC West teams are falling apart, the NFC South will not give a wildcard team, and the NFC North remains a bit inconsistent for that #2 spot behind Green Bay. A strong finish for RGIII and the Redskins could see them sneak into the playoffs, and a key factor for this offense to get clicking agian is Pierre Garcon to be a Fantasy BEAST to close out the season.