In this post there are plenty of Buy/Sell Players based on my R.O.S Rankings below.  Thank you all who joined the chat, and do not forget that the BEAST DOME LEAGUE is this SUNDAY!

TRADE MARKET WEEK 5: How Could You Be So Hartless

This week is going to be completely different than the others.  I have been very busy helping other BEAST DOME members draft teams for the Fantasy Basketball Payout league.  I really recommend you pick up the VIP #1 Package which includes me drafting two teams with you, as well as managing them.  That is $100 to win $1,000.   To read more about the contest, as well as the VIP program click the link below. 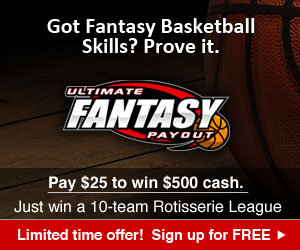 Because I have been busy you can read about other players in other articles.  Here are the latest suggestions.

Every Fantasy Football Owner who follows Beast Dome has one mission until Sunday.  Get Run DMC.

What people do not realize is Darren McFadden is exactly what you want your Fantasy RB to be.  He is fast, he is big, he can catch the ball, and he can score on any play.  The Raiders offense is slowly getting it together, and when they do you will wish that you had McFadden.  He is the type of player that can rush for 160 Yards/2 TDs and single handily win your week.

Owners that have him do not know what to do, and will take just about any package of good players they can for the 1st round value pick.

Hey I just met you, and this is crazy, but here’s some trade advice.

McGahee has a very favorable schedule coming up, and it starts this Sunday Night against the Saints. I have been high on McGahee since Day 1 of the preseason, this is your last chance to get him for non top 10 value.

Jamaal has put his owners through a roller coaster all season.

So many ups and downs, why continue to go through this especially when you know his team is getting worse and worse by the week.  The Chiefs are not going to with the AFC West, in fact anything better than last place is a good season at this point.  Sell Jamaal, get Run DMC and you will find yourself as a new happy man.

What we know about these two is that neither can have great games in the same game.  Only once all season did both players break double digits in the same week.  It was the week they got blown out against the Bears on MNF.  No reason to keep rolling with these two egos and you should just get rid of them now in a package deal to land McFadden.

Brady Quinn and Matt Cassel both have something in common.

They are terrible QBs who will not deliver consistent fantasy stats to Bowe.  Dwayne is a great player, but he also needs a QB who can make great throws to him consistently.  I would rather have John Skelton as my QB than any of these guys.  Bowe wants out of KC, you should want him out of your Fantasy Team.

Muntradamus is a Fantasy Sports Expert who specializes in Fantasy Football/Baseball/Basketball. He is currently in his first season as a Pro on FantasyPros where he is the only expert to have Adam Dunn, Chris Davis, Mark Trumbo, Ian Desmond, Jarrod Saltalamacchia, and Wilin Rosario in his top 20 at each position. Muntradamus not only leads many to championships with his great advice, and outlooks into the future. He is also consistently on the top of leaderboards in DraftStreet. He was also the #1 Fantasy Football Expert of IDP & Overall Rankings, first time in Fantasy Sports History.  To check his Preseason Fantasy Football Rankings Click Here. He also won a 1,000 person tournament in Fantasy Football to qualify for a trip to Vegas to play for $500,000 in Prizes.