Last season the BEAST DOME Draft Strategy centered around Drafting Tom Brady who was the #1 QB in my Rankings. Even though he did not finish #1, he was being drafted in the 8th Round of all leagues in 2020 and finished the season with 40 TDs. Easily carrying all BEAST DOME Draft Guide Followers to huge seasons.

Heading into 2021 BEAST DOME once again ranked Tom Brady higher than any Fantasy Football Website. Brady has a healthy WR core, something he did not enjoy in 2020. Week 1 he goes up against the Cowboys Defense who now has Dan Quinn as their DC, only problem is Dan Quinn is very overrated.

No not that Brady Quinn. We have Tom Brady vs. Dan Quinn. A combo that has met in multiple Super Bowls.

Quinn was the Defensive Coordinator for Legion of Boom, the defense that was led by the secondary, which lead the Seahawks to multiple Super Bowl runs, Dan Quinn was the Defensive Coordinator who matched up against Brady in the Super Bowl. A defense Quinn inherited, not built on his own, from there Quinn went to the Falcons and was the Head Coach that turned the Franchise around and took the Falcons to the Super Bowl where they infamously lost with a 28-3 lead late in the 2nd half, to the man playing Thursday Night Tom Brady.

But it was not the defense that led the Falcons to the big game, it was the BEAST DOME QB call of 2016 MVP Matt Ryan.

From that point on in 2016, Quinn and the Falcons started a decline into horribleness. The offense was always clicking for Atlanta, their defense was never the same a lot of injuries, but not really anything more than about average defense/a bit underrated, at best.

Now Quinn takes on a Cowboys Defense that has average plus names, but still a lot of holes. Based on watching him on Hard Knocks, and the Cowboys Defense in general. It does not seem like he is overly confident in this group, and they are nowhere near a Top 15 Defense, something the Cowboys need to be in order to be a Super Bowl contender. Still can make the playoffs.

Enter in Tom Brady, a QB who looked like he was in Prime MVP in his last preseason game against the Texans. The Cowboys make an error, Tom Brady will take advantage. The Cowboys cannot guard all of the weapons, and the Cowboys defense really did struggle with no positive momentum heading into this matchup.

On the other hand Dak has yet to play in a preseason game, but the WR core should be ready to make noise against the Tampa Corners. Dak will have to expose Tampa through the air because that front 7 for Tampa is so fast, it seems almost impossible for the Cowboys to win this game relying on Zeke.

It is Tampa ring night for night one, and one mistake from the Cowboys offense and this game is over. Seems very unlikely Dak is going to be looking vintage with no game action heading into this one, even if it takes him 1 full Quarter to find his groove, it may be too late. 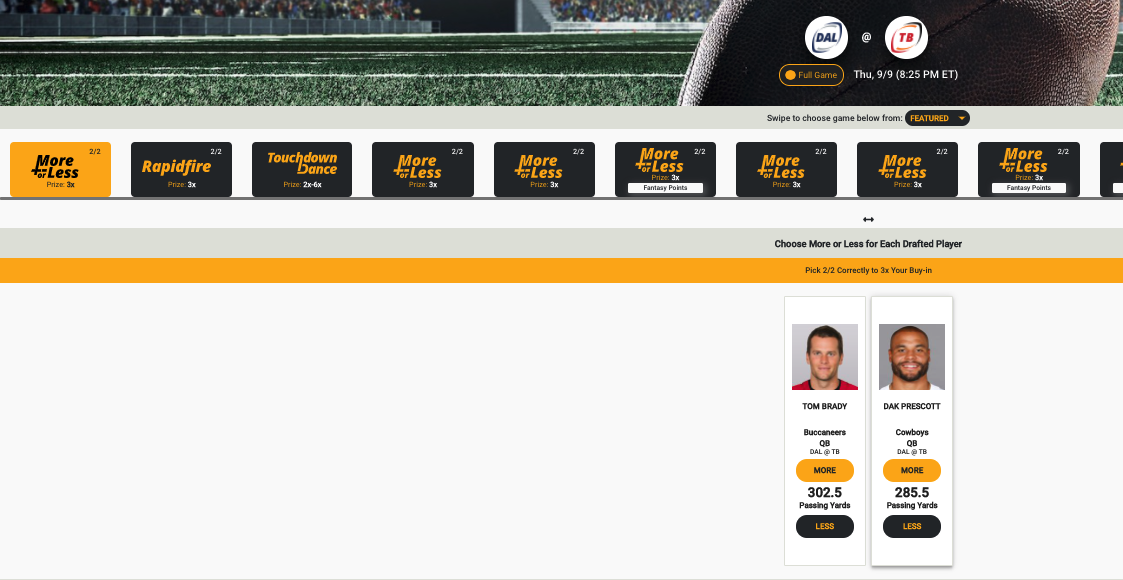 Tampa should be driving with ease all game long. Brady can knock out nearly 200 Yards by halftime. As long as Dallas remains somewhat in this contest, Brady will lock up 300+ with plenty of time to spare.

As mentioned above, Dak is going to need to carry this team through the air as the ground should be locked down. Tons of garbage time will help Dak get 300+ Passing Yards.

DID NOT DRAFT WITH BEAST DOME?