Last season at this time, you were excited to see your 4th Round Steal in Brandon Marshall play Week 2. One year later, your 2nd Round pick Brandon Marshall has Fantasy Owners concerned after a disappointing Week 1 where he failed to reach 50 Yards.

There is no reason to hit the Panic Button on the BEAST DOME star who had over 1500 Yards last season and brought many of you another Championship Trophy as he dominated the Fantasy Football Playoffs.

Brandon Marshall can get it going in a minute, and this Thursday Night game could be a big statement that he is still the same BEAST we know he is.

That’s why they call him Slim Shady. Lesean McCoy is the heart and soul of this offense. With Sammy Watkins out, Gang Green will make sure all eyes are watching Lesean McCoy from the windows to the walls. Despite watching Lesean that closely, you still cannot discount how explosive and one cut n go he can be. If Slim Shady runs around the big slow Jets D-Line, and slices his way past the aging David Harris. Lesean will have a couple opportunities to break long ones. It is up to Pryor to make some big hits in the open field, which is not guaranteed.

Tyrod Taylor will be running for his life all game and trying to make something happen. With or without Sammy Watkins, it does not make a difference at all. Darrell Revis was embarrassed by AJ Green in Week 1, and if he goes up against a less than 100% Sammy Watkins, Revis Island will return from his vacation. Tyrod Taylor could be a mess and there is not one Bills player I like outside of…

O. O. O. Fitzmagic returns to Buffalo and has a tough matchup on paper, but excellent matchup in heart. Fitzmagic will give it all, and the good news is, he will have the entire field opened up because of his newest toy, Matt Forte.

Forte is looking primed for one of the biggest seasons of his career. Fitzmagic relies on him, and the Jets may have won if they would have handed the ball off to Forte instead of Bilal Powell in a crucial 3rd and Goal at the end of the game. Matt Forte is the workhorse and will be playing until he is tired, or it is 3rd and long. Let Powell block anyways.

When Fitzmagic has time thanks to Matt Forte who is looking like one of the best RBs in the league. That is when Magic will launch some 1-on-1 opportunities for Brandon Marshall. You can never discount the potential of a Brandon Marshall, TD but it will not be easy as Stephen Gilmore will be draped on Marshall all game. Brandon at times can be unguardable, and Magic needs to get his favorite toy a little bit of mojo. 1 TD on Thursday Night Football for Marshall can go very very long ways. 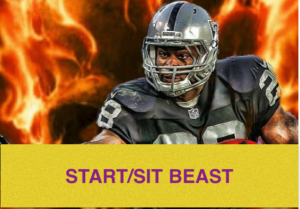