The pursuit of my goals and making my life change everyday on the Fantasy Sports Gridiorn has led me to learn a lot about my life. The number one goal I have learned that many have yet to master, and some have. To not let money drive you. Instead to come from a place of passion and just have the most fun I can possibly have. I want to thank you all for being part of my process as I once started this site when I was 23 Years Old deciding to quit my job because I did not want to be a phone surveryr, to now running this site full time at the age of 30. I am trying to slow down my ferrari thoughts, and enjoying the moment game by game. My goal is to win a big tournament, not have money be a thing and everyone can get my content free, like below.

Enjoy my breakdown of the slate, and a very happy Thanksgiving to you all. Last but not least, thank you for all the votes to move me forward to the Final 4! 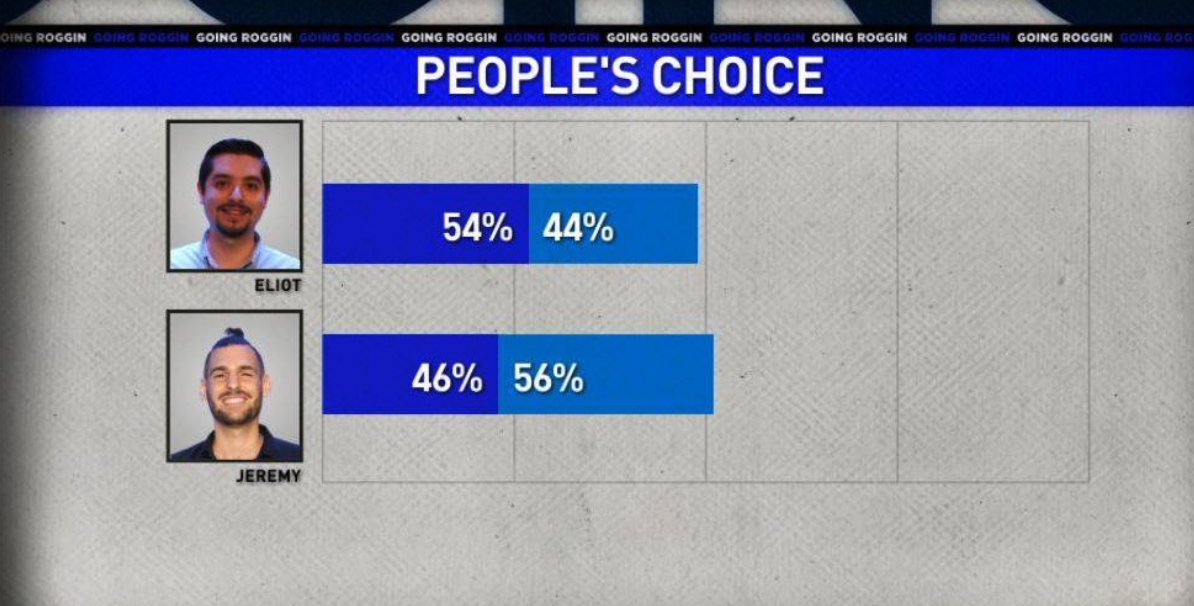 Sooner or later, the Lions being a Thansigiving tradition will have to come to an end. People would be a lot more excited if there was an actual Playoff team that was hosting these games instead of a team that is trending down very quickly. The biggest reason the Lions are trending down is their secondary. Secondary actually still has a lot of talent, but this season it is not coming together and it could be because they lost their Defensive Coordinator in Teryl Austin, I will blame the organization for getting rid of Tair Whitehead who was their leader. The Run Defense has improved leaps and bounds with the addition of Snacks Harrison, but their secondary is still having problems. Luckily for the Lions, Chase Daniel is the QB. Which means the Bears should be more conservative on offense. Yes Allen Robinson will be open, and Chase is capable of hitting him. However do not be surprised to see a lot of Anthony Miller but more of Taylor Gabriel in the quick passing game. Even Trey Burton will have his moments to get some big plays as the Lions LB core is really struggling. Both Bears RBs should have solid games on the ground, but I will give the edge to Tarik Cohen because his speed on that dome turf can push him from 0-100 really quick. Howard is a candidate to run the ball late in the game with the lead and potentially steal some goal line carries, but it will not be a walk in the park with Snacks Harrison. Then again, after Harrison Lions front 7 D has nothing.

The Lions offense has a tough challenge, especially without Kerryon who was Kerry-ing the Lions offense on his back. The Lions running the ball well against the Bears is likely not going to happen. Hicks and the rest of that Bears Front 7 prides itself on being such a great run D. Expect the Blount experiement to work not at all, making this a Theo Riddick game. More than a Theo Riddick game, a game where Stafford has to throw the ball to keep his team alive. Kenny Golladay will see a ton of targets once again, because once again Marvin Jones is OUT. After Golladay, we are looking at Bruce Ellington who can get open in underneath routes but a tough matchup against Callahan wont make life easy. TJ Jones is one of those long shot TD picks that can work out, but once again it is a long shot. The most success the Lions will have is throwing quickly to Theo Riddick. It does help Michael Roberts will be back at TE, but that is not enough to change the Lions night and day.

The Redskins come into this game hoping Colt McCoy can lead them on the road against a Cowboys team that is playing great football. To make matters worst for the Redskins, their O-Line is not near 100% even though star Tackle Trent Williams will return. The Cowboys pass rush is playing their best football right now, and the timing could not be more perfect. However with still no Sean Lee, Adrian Peterson is always a threat to do damage, Bibbs will enter the game when its 3rd down or if the Redskins offense cannot move the ball. The big addition besides Trent Williams, is the return of Jamison Crowder. Crowder has had a bad season, but this is a matchup he needs to do well in as the Cowboys are ready to give Jordan Reed star treament on defense, that will now have to shift. Crowder can find open gaps and it is not likely McCoy will want to take deep shots with his outside WRs. Crowder should have a nice return, Jordan Reed is however the #1 Option. What makes Colt McCoy great is his Ryan Fitzmagic ability to run, Colt can make this game interesting.

The Redskins Run D has been tough all season, their secondary is good as well led by Josh Norman and Ha Ha Clinton Dix. Dallas and their passing game has had more troubles than anything this season and after blowing an easy matchup against the Falcons, life is about to get tough. Best way to attack the Redskins is the quick one on one routes, which leads me to believe that Cole Beasley is going to see more targets than Amari Cooper this week. With Swaim out of the picture, the TE position is very unsure, regardless that TE will be asked to block as the Redskins pass rush with Kerrigan coming off the edge is a lot to handle. Expect Dak to find Cole quick, find Zeke quick, and maybe take his shots when Amari Cooper does not have Josh Norman on him. What we do know is that Zeke Elliot is going to get a lot of carries, and even though this Redskins D Line is playing great and they shut him down earlier this season, Zeke is running hard and running strong. At home, Zeke can make anything happen.

The Falcons better be ready to score some points, because no defense can stop the Saints in New Orleans. With the Falcons holding one of the worst defenses in the NFL thanks to injuries to most of their stars, the Falcons defense is in a lot of trouble right away. Matt Ryan will be going pass heavy once the Falcons fall behind, which means a lot of Julio Jones/Mohamed Sanu/Calvin Ridley. With the big lead, look for the Falcons to play a defense that does not give up the big plays so expect a lot of Austin Hooper over the middle as well. Tevin Coleman is always capable of the big play, especially in the passing game when he can catch it in space. The Falcons offense will be aggressive all game, which will be great for Fantasy performers on their entire offense. Saints Pass rush has been solid, and there are some good names in that defense, but Matt Ryan has been tearing up the Saints D for what feels like a decade straight now.

The Saints offense is in New Orleans against the Falcons. Alert the person who plays that song after every Saints TD that they will be working overtime. The Saints offense is on one and with TreQuan Smith playing, there is no doubt that the Saints have too many weapons for the Falcons to worry about. New WR Kirkwood is not bad either, but Thanksgiving is for Mike Thomas in the passing game and of course Alvin Kamara. Kamara will get a lot of damage done on the ground, as well as Mark Ingram who could explode for at least 2 TDs in this one. The Saints offense could score a TD on every drive making this one of the most dominating performances this season. Every weapon is going to do their part. Falcons last week did well against the pass, but the Cowboys passing game is not the Saints passing game. 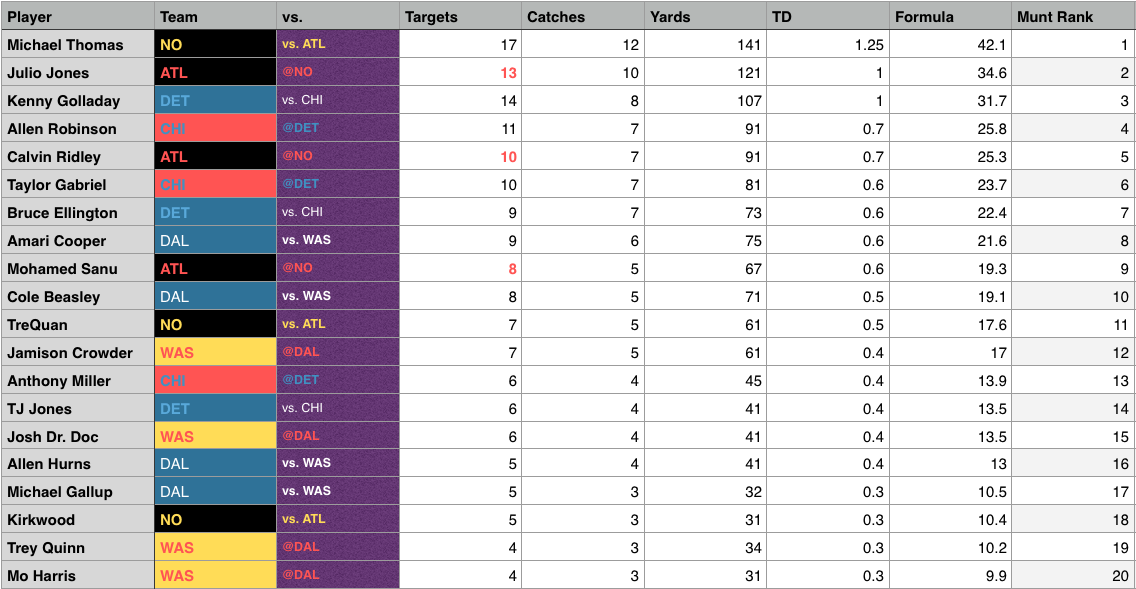 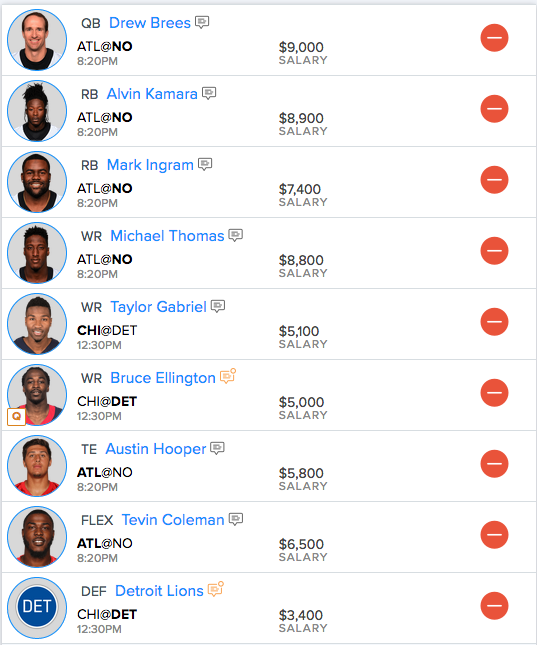 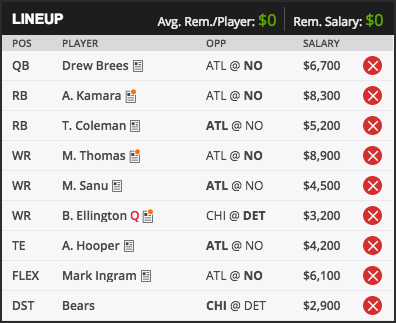