What does it take to be the ultimate GM?

Is it starting Mr. T on a week that he scores a Touchdown, when nobody else in the entire NFFC Primetime Tournament even had thoughts about throwing him in their lineup?

Is it gaining those 2 extra points by starting Russell Wilson over Matt Stafford?

Unfortunately for TEAM BEAST DOME. Neither of those GM Moves mattered as my Superstars in Marshawn Lynch and Jimmy Graham left my team fractions of points away from picking up my first win. Like the Seattle Seahawks, TEAM BEAST DOME (Team BEAST) falls to 0-2. 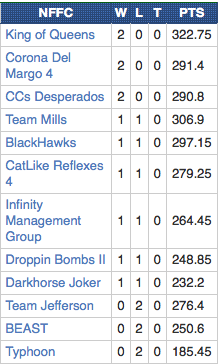 Week 3 Team BEAST DOME goes up against the first place King of Queens, the perfect time for my squad to gain some momentum and realize that Fantasy Football is not a sprint, it is just a really fast race. Before I can win the race, I must decide who my runners are going to be. 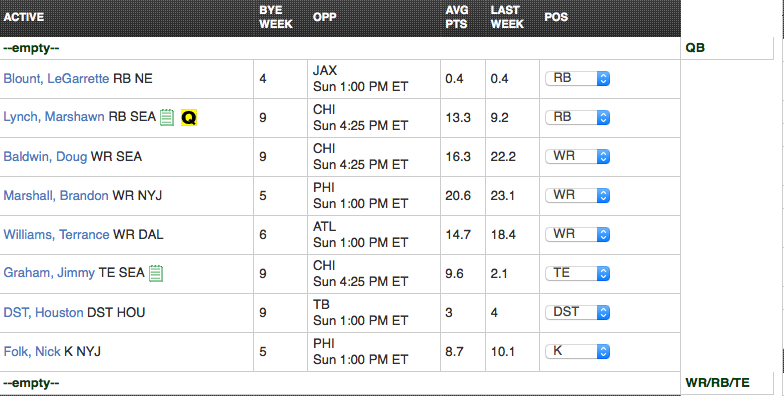 The ultimate Fitzmagic insurance is having Nick Folk this week. If Magic stalls in the Redzone, look for Folk to have a field “goal” day with ease. I am hesitant on using Matt Prater this week due to the fact that the Lions may fall behind too soon as that has been their issue all season long. Now they go up against the leagues best defense in the Broncos. More on Stafford later.

Last week I said, “LEGARRETTE BLOUNT ARTICLE CALLED THE PATRIOTS GAMEPLAN.” Now that you have put up with the bad, it is time to experience the good as Blount should easily see 20+ Carries this week. When the Patriots get near the goal line, the Jaguars do not have the option in selling out on stopping the run, which should lead to a TD at the very least. Puff. Puff. BEAST.

While many are scared about Brandon Weeden. Trivia Question, “who was the Browns QB during Josh Gordon’s 2013 explosion?” Answer is Brandon Weeden for 8 Weeks. No he did not play the whole season, but Gordon did have productive games when Weeden was healthy. Not to mention Terrance Williams has 1 TD with Weeden this year, and zero with Romo. Not worried, Dallas does not have any other WR to throw to.

I found my glue. Baldwin is the perfect insurance for my Marshawn Lynch/Jimmy Graham combo. If it is not one of them touching the ball, or Wilson running himself. Doug Baldwin is the clear #2, last week #1 option in the passing game for the Seahawks. With the news of Drew Brees going down, Doug Baldwin is my clear WR#3 on my roster until he proves otherwise. Anything less than 10 Points in PPR would prove that to be the case as he is as AUTOMATIC as it gets.

If Houston D does not show up this week, they are getting pulled for the Bills. Texans Secondary looks weaker than a Freshman lifting for the first time at a college gym. Anyone can pick this team apart and if you go Shotgun you avoid the pass rush. Someone in that secondary needs to make a play or the Texans will slowly become a team that has a huge flaw that they never addressed. Something Hard Knocks did a good job hiding..

Fitzmagic. It is fun to say, it will also be a lot of fun watching him on Sunday. The Eagles defense has more holes than a block of swiss cheese. With Chris Ivory banged up and a true GT decision, the Jets will likely rely on their best QB since Vinny Testaverde to take down the Eagles. That means 40+ Pass attempts at the bare minimum. While Eric Decker might not play, Magic has made it work with average WRs plenty of times in his historic career. Chan Gailey (ex-Bills coach, current OC NYJ) and Fitzmagic might not be Bill Belichick and Brady, but this week in Fantasy Football, you might see some sort of connection.

While everyone would say you are crazy to bench Matt Stafford this week in his home opener on Sunday Night Football, the truth is you kind of have to make that move. Matt Stafford has been getting beat up as if he was sitting in a car next to Chris Brown. Arm sleeves, cut up elbows, bad ribs, bruised chest. Stafford is simply too beat up, but he is a warrior. He will play this game against the Broncos and he will probably throw the ball 40+ times against the Broncos. That does not guarantee success, but at least he will put himself out there to have the big fantasy game.

But there is one Risk. The risk is so high, I am not going to consider Stafford this week. The risk of Stafford getting blind sided or even hit hard by DeMarcus Ware or Von Miller is so High, it could send Stafford out for the game. If the Lions are down by 20+ in the 3rd Quarter, Stafford may sit out the rest. If Stafford takes that HARD hit early on and stays in the game, he will likely be a fraction of himself.

All week I was planning on starting Fitzmagic over Russell Wilson, he will likely be ahead of Wilson in my QB Rankings this week. The Seahawks could blow the Bears out by 40 Points and Russell Wilson may not get 1 TD in the process of it. Then everything changed Friday when the Seahawks said Marshawn Lynch is a TRUE GT Decision with a bad calf injury.

If Marshawn Lynch does not play in that game, and I do not have Russell Wilson in my lineup. I would be cussing out the entire sportsbook everytime Wilson decides to run the ball himself instead of dumping the pass off to Doug Baldwin or Jimmy Graham. With Lynch banged up, Wilson will have to make sure the Seahawks cover that 14.5 spread himself which leaves me with no choice but to go with Wilson over Magic.

How many Weeks does it take to get to the center spotlight for all of the BEAST DOME NATION. Hopefully 4.

No way am I starting him with Luke McCown at QB. While I hope Colston does great, I am not going to take my chances.

Not going to play him this week, hopefully he sits out and lets Justin Forsett rack up those body shots.

Had to drop Montee Ball to pick him up. Not happy about it, but if Lynch sits tomorrow, Rawls is my last line of offense. I will go back for Montee after this game, just hope I don’t have to blow my Ball of FABB money to get him.

Melvin Gordon. That Chargers game could turn into a T.O.P. battle which is something that could leave me on the short end of a very productive Melvin Gordon game. The Chargers are giving Danny Woodhead too many touches, and if they fall behind by just a little bit Melvin Gordon gets phased out of the gameplan. If the Chargers start slow, Melvin Gordon will never get going. Long-Term, Melvin Gordon going to be great as he is a STRAIGHT BEAST.

Jeremy Kerley. Lost the Ravens Defense to add Jeremy Kerley on Friday. If Decker sits, Kerley is my guy this week in my Flex. I believe in Magic and Kerley is extremely underrated as he was the WR leader in 2012 when they had no QB. Kerley will be the #2/#3 WR in a 4 WR system this Sunday, so either way he will be on the field and Magic with that Harvard IQ will get him the ball.

IF DECKER DOES PLAY Sunday. Melvin Gordon will be my guy. 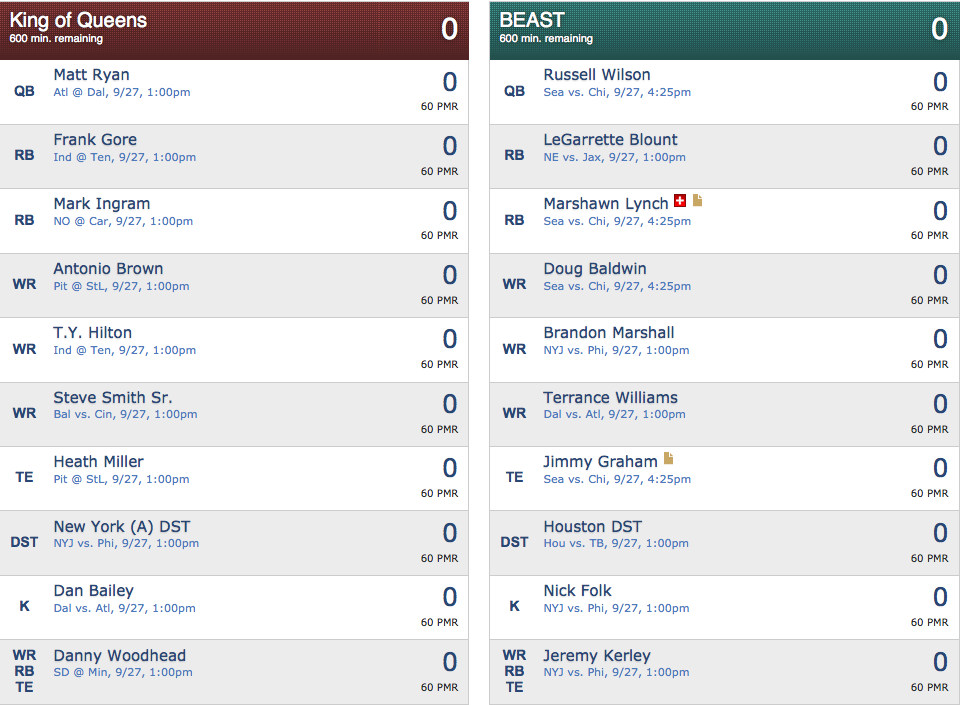 They say nothing in this world comes easy. My team is more banged up than I would like them to be early on in the season, but as long as the Seahawks and Jets combine for 70 Points, I have a good chance of coming out with the W.