I BELIEVE IN MAGIC (Week 9)

The train to domination appears on a course headed towards needing a miracle. While my place in the Standings looks hopeless as I need to finish in the Top 3. 190 Points/5 Weeks remaining before playoffs = 40 Points Per Week Average win over 3rd Place Team. Doable, but not easy.

I have never been more confident in my squad. 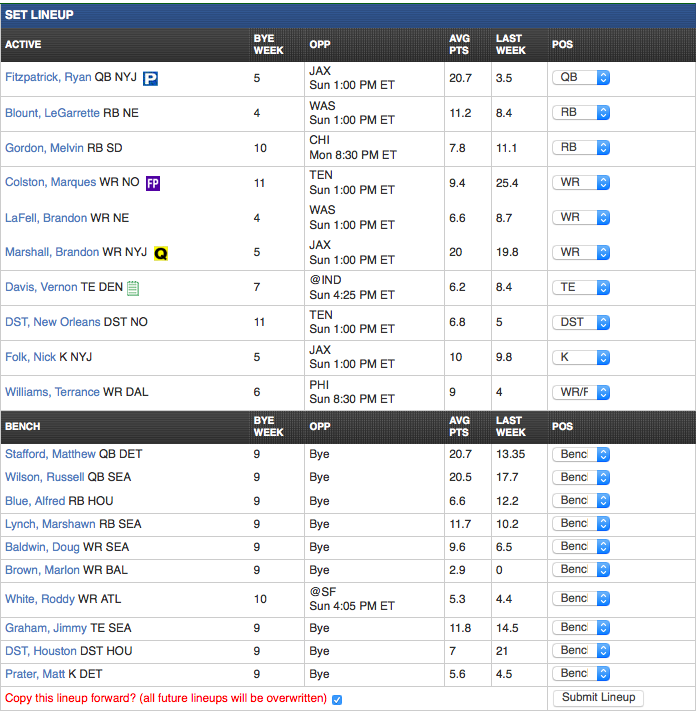 Yes this is the Week we all looked at on Draft Day and said, all of my players have a Week 9 Bye. Evan Arian Foster and SSS, R.I.P., would have had their bye week in in Week 9. As I write this and look at my bench above, I still cannot believe the problem Russell Wilson caused in my draft. While James Jones stock is in Free-Fall-Mode, his points from earlier this season would have helped me be at least middle of the pack. Instead Wilson fell to my lap in Round 9 and with Marshawn/Graham already on my squad, I pulled the trigger for a backup QB early to prevent someone else from getting his points.

Yet I write to you and say, this is the strongest this team has been when I escape the Bye. Yes Arian is gone, and he is not replaceable. But I now have a Marques Colston that has the momentum of what I once expected, a Roddy White who no longer has to deal with a 100% healthy Leonard Hankerson, as well as a Texans Defense that finally showed some life. While I am discouraged about Stafford after last week, I am still confident the Lions will figure out the mess during the Bye Week.

My latest edition to the squad is Marlon Brown. Too bad I blew all of my money a couple weeks ago on Roddy White. Bad move in Hindsight but I needed to take the chance on him becoming WR#2 material after his TD against the Saints. Who knew if a big name guy would be available the rest of the season. Marlon Brown is likely a bench warmer and the #6 WR on my team.

Vernon Davis will eventually be an Every-Week Starter when he becomes familiar with the Broncos System. I added him a few weeks ago when he was a 49er, my entire Bye Week plan with Folk and Saints Defense has been sitting on the sidelines for 3 weeks now. This is their time to shine.

Obviously with Fantasy. Everything is match up based. Good news is I have options I can deal with and if I play it like an Ultimate GM. I can scrape away every point and get that 3rd place. I have a feeling every play on this list outside of Doug Baldwin will have at least one game in my lineup. Marshawn Lynch/Brandon Marshall/Brandon LaFell/Jimmy Graham are my only Vital Must-Play every week options. 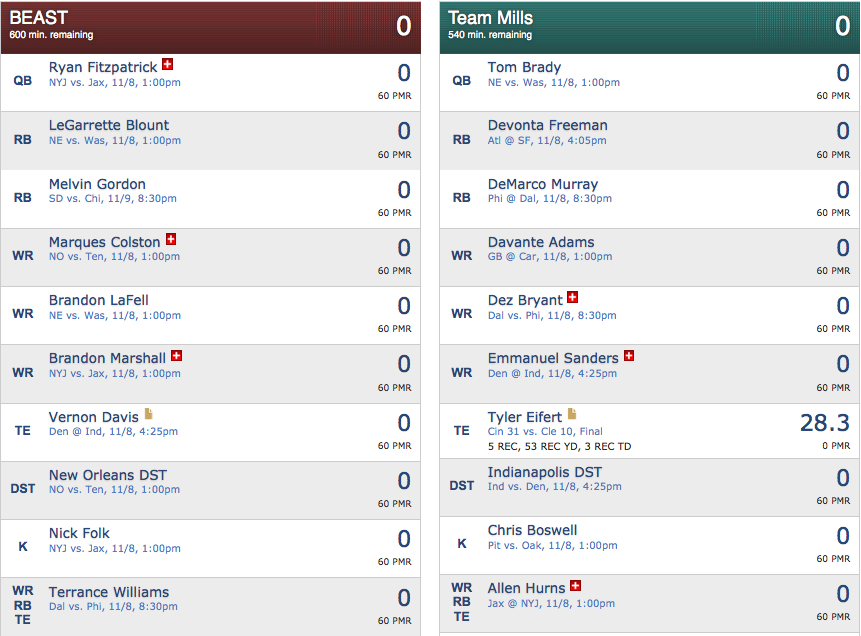 My Record is 1-7 this season. A big reason for that is playing against players like Tyler Eifert when they have their BEAST week of the season. Even when I go up against Khiry Robinson he scores a pair of Touchdowns, last week I went up against Malcolm Floyd who had 2. It has been the story of my season all year. Enough excuses.

Need my team to BEAST on Sunday. Need Fitzmagic and Marshall to connect a couple of times and make a huge dent in the standings. My time is running out, and even with all my Bye Week Players, I still have a squad I am confident with.