RGIII is no doubt not the QB we wanted him to be this season. It is still too soon to say he does not have a BEAST performance in him, but he will not be my starting QB for Week 12 as TEAM BEAST DOME makes a comeback from the grave after another victory against one of the top teams in the league “Kadubec.” After beating Mamma Named Him two weeks ago, I will need to carry all of this momentum into my next matchup as I face the 1st Place Team in Trillest.

First thing I am going to do for Week 12 is bench RGIII. He has not been the QB I needed him to be this season, like I said earlier, he can still bounce back with a big game later this season. His playoff schedule is pretty easy after this game against SF. I will ride with RGIII the rest of the way if he can show me why he deserves it on my bench.

This is my biggest lineup decision this week. The matchup for Vick for a lot sexier as he goes to a Dome where he can show off his wheels. Chances are the Jets are going to throw more as well against a Bills Run D that gets the job done on a consistent basis. Despite all that, I will go with Joe Flacco who should throw the ball 40+ times with no problem against the Saints. When the Ravens are in games that should be competitive, Flacco and his arm cannon are usually set to be active. Steve Smith Sr. also has great history against the Saints when he was with Cam Newton, which should help open up the entire passing game. 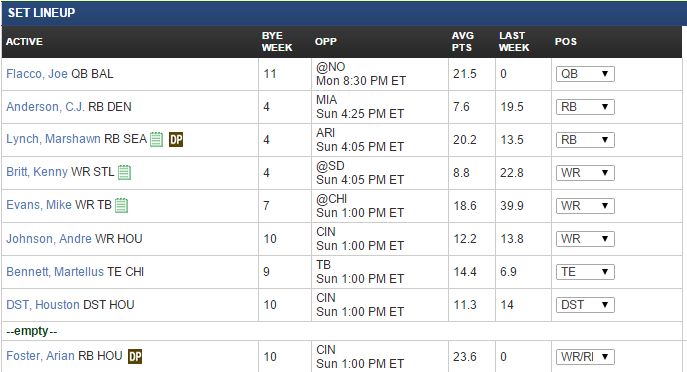 IF ARIAN DOES NOT PLAY 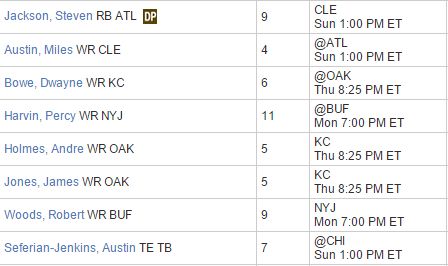 Between Steven Jackson and Percy Harvin is where the big decision comes into play. You have to expect that Percy Harvin is now familiar with everything the Jets are trying to do after an entire Bye Week and already three games under his Jets belt.  While I want to roll with Percy, I have to go with Steven Jackson who has now seen 18+ Touches three weeks in a row. The Falcons are finally realizing that they have to run the ball to win Football games. The less they run, the more that defense has to be on the field.

This team is 1st Place for a reason. It does help me that Emmanuel Sanders is likely going to be OUT this week, as he is looking at Roy Helu Jr. as his next best replacement. As long as Colin Kaepernick stays somewhat inconsistent I should be in good shape to win. I dominate him at the RB spot, although Shane Vereen should be a bigger factor this week than he was last. WR he has a slight edge, especially IF Josh Gordon plays a full game. Chances are he will. Keenan Allen is also primed to make some noise against the Rams.

The X-Factor for my team is C.J. Anderson. If CJ can have the type of game that the BEAST DOME NATION has been dreaming for with Montee, I should be able to slide ahead of the competition.