After getting 5 TD’s from Stafford on Thanksgiving + the QB/K. Along with a HUGE 3 TD performance from Doug Baldwin to go along with Alfred Blue and Brandon Marshall. I have officially dug out of my last place hole. In the end, it is too late. Still have a chance to go from 12th to 7th real quick. 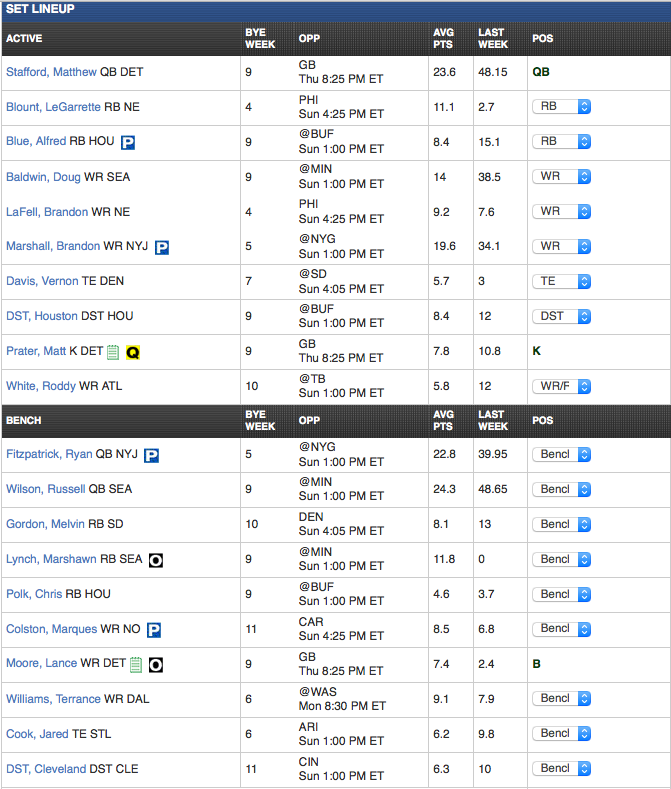 Roddy has now seen 17 Targets in his last 2 games. Most surprising stat of all, Roddy had more targets than Julio Jones in Week 11. While Roddy has somehow disappeared out of nowhere this season after being very productive in 2014. It appears that Roddy has something left in the tank for the Fantasy Playoff run and could move his way to a strong WR#3 before it is all said and done.

If Roddy is for real, he has to keep it going this week against an injured Bucs Defense. While I wouldn’t bet my house he has over 80 Yards, if you are desperate for WR options, you could do a lot worse.

Like 90% of you reading this article. You lost Jimmy Graham in Week 12. Using Vernon Davis this week could/should be the answer as the Chargers Defense is going to be LOST on Sunday against a Hot Broncos team.

Between guarding Sanders/Thomas and worrying about the RB combo of Hillman/CJA. There is no way the Chargers decide to even worry about guarding Vernon Davis unless they want to get burned. Every ball thrown to Vernon Davis should mean big Fantasy Points. Yes Owen Daniels is a threat, but at the end of the day Vernon Davis should be the guy.

Added Jared Cook to replace Graham. Not planning on using Cook with that horrible Rams passing offense. But he is a body.

If you are looking for a sleeper Waiver Wire Defense for Week 14, look no further than Cleveland Browns. They are Home against Blaine Gabbert and the 49ers in what will likely be a very cold game. Blaine in cold weather is a mistake waiting to happen everytime he throws the Football.

Texans Defense is going up against the Patriots in Week 14, not a good move to trust them. 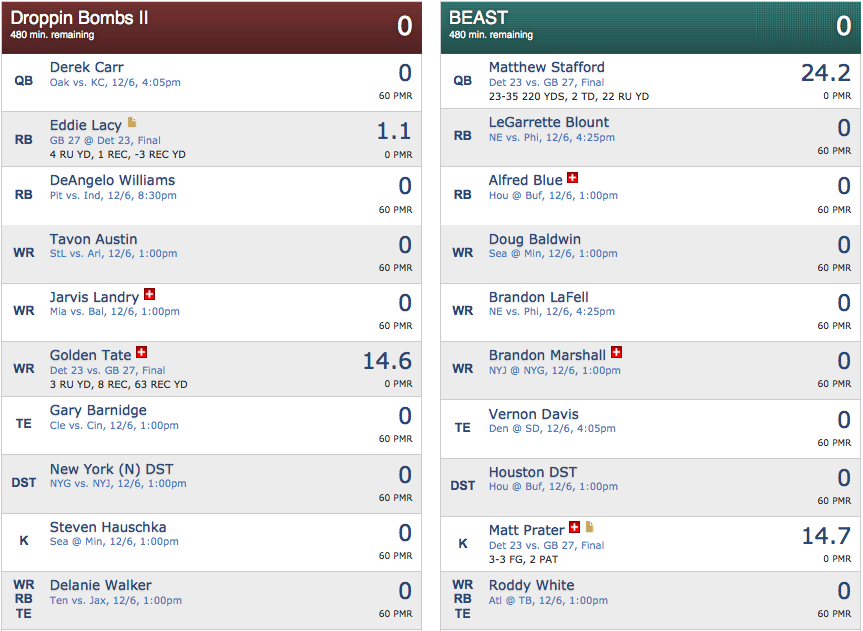 While it is too late for my team to make a comeback. Injuries to Marshawn Lynch/Arian Foster/Jimmy Graham, my first 3 picks. I am still the #1 Team in the League since Week 12. I will qualify for Consolation Playoffs that start next week, which is my last chance to make a comeback.