*I WILL BE LIVE IN THE BEAST DOME CHAT SUNDAY MORNING AT 9:30am PST*

Once upon a time, Brandon Marshall was an Elite #1 WR who was better that Odell Beckham Jr. and in the same conversation as Julio Jones and Antonio Brown. How long ago was this? Less than a year ago!

This season has gone from Fitz-MAGIC to Fitz-TRAGIC. The Jets endured a tough part of the schedule and decided to throw the panic flag on their season. The loss they had against the Rams was truly horrible, and if Magic was healthy enough to play in that game, Coach Bowles blew his season for no reason.

The Jets come out of the bye, they are turning back to the Magic Stick. Brandon Marshall and Fitzmagic are one of the most dynamic 1-2 punches in the NFL today. If they are ever going to show the world that their season is not over, Sunday against the Patriots is the time to do it. Magic and Marshall have to combine for a memorable performance not only to save the Jets, but to pave a path towards a big finish for two. The two were able to combine for a big win against the Patriots last season, we will see if Marshall has one last push before his season is done.

*Never have I been in such a close league. 1 Loss and I am out*

Was not great going up against Le’Veon and Zeke for Thanksgiving. However the QB/K Combo was HUGE as it allowed me to stay in contention with a big Sunday. If the Jets beat the Patriots, which is slightly possible. Then I should advance to 7-6. Jonathan Stewart stealing Cam Newton TDs would be bigger than big. 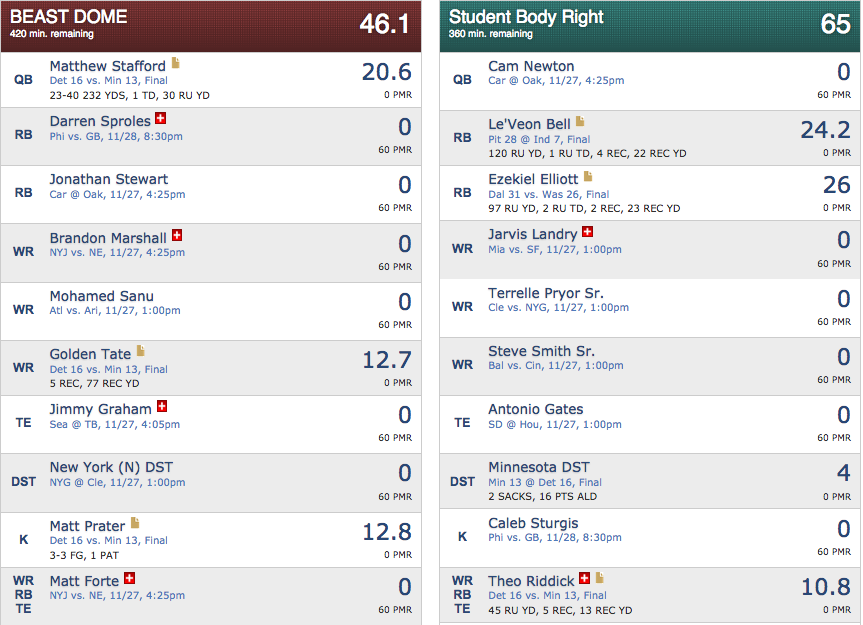