The playoffs are back!

I Appreciate all the kinds testimonials that are being left on the 2018 Season Recap. We will be expanding the BEAST DOME content this month to another level. Enjoy the Playoff Prediction content below, to get all of my Playoff Predictions for the Rest of the Playoffs along with DFS Rosters, Purchase Preseason BEAST 2019 and I will throw all the Playoffs in. 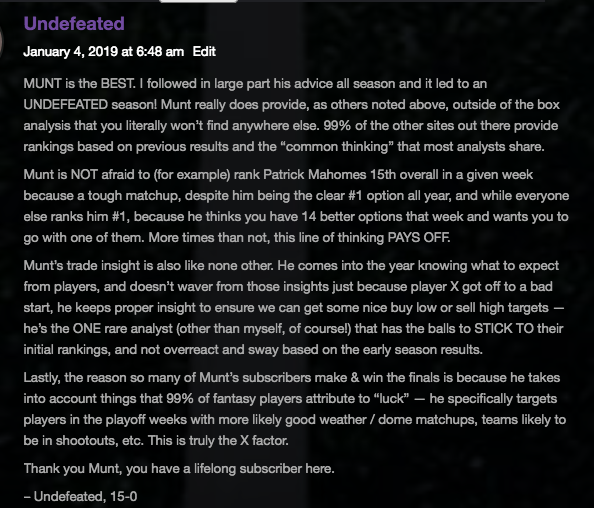 The Weather outside will be snow and windy. Something that spells disaster for these two dynamic offenses. Throwing the ball to the prolific level these two teams usually do will be hindered greatly. Expect a lot of running the Football and playing it smart.

The Chiefs Run D can have a lot of problems with Marlon Mack. He can outrun everyone, they are weak up the middle, and once he hits that second level..he can be gone. Throwing the ball short to Eric Ebron will be a great option, but TY Hilton getting deep today is not likely. The Chiefs should be prepared for Hilton trying to make move.

Andrew Luck is looking at a game of going for 275 Yards with a potential couple TDs, but it feels like one of those days where it will be everyone you do not expect to catch a TD, but my money would be on Eric Ebron.

The Chiefs will be without Spencer Ware again, which means Dame Williams will get the carries. The Colts Run D has been iffy with good moments and bad moments mixed in. Likely with a game where they have to worry about Mahomes no matter the weather, Williams should be on the good side of life. Expect Williams to get a lot of carries, expect Mahomes to spread the wealth heavily, but do not be surprised to see Travis Kelce getting the bulk of the targets. However I will say Demitrius Harris is a great sleeper.

The game of the TE combos, will be a fun one to watch. Both teams will be fighting hard but the Colts will be completely out of their element with the wind and snow.

The Rams offense needs to get it together again against a real opponent. Dominating the Cardinals and 49ers is nothing like a hot Dallas offense. Expect the Cowboys to be riding Zeke Elliot hard in this one. The Rams Run D is not that BEAST at stopping a guy like Zeke as the Rams LB core is very weak and the Cowboys O-Line is good enough to not let Suh/Donald destroy them. The Cowboys will likely limit the air attack as Cooper against Talib or Peters is too tough for him to dominate with ease. Cole Beasley is a good sleeper target, but do not be surprised to see the Ex-Ram Tavon Austin do some damage. All in all, the Cowboys will be mixing up their targets, but the ride or die is definitely Zeke.

The Rams can beat the Cowboys both ways on offense. Through the ground and on the air. The Run Blocking schemes are taking off because for CJ Anderson to run for over 300 Yards in 2 games, no matter who it is against, means something is working. Todd Gurley will have to step into that role right away. If the Cowboys Run D, which does have talent, has a tough time stopping the run. That will open up the play action and that is when Goff can get dangerous.

Expect the Rams offense to light up the sky on Saturday night and we should be able to see vintage Jared Goff have open WRs all over the place. If there is one weakness for the Cowboys D coming into the season, their secondary is not really a playoff worth unit. Robert Woods and Brandin Cooks can get open, as well as Reynolds if he is getting little attention. The Rams Offense will return to form.