It is not often a Super Star RB is caged. A RB who in my opinion has Le’Veon Bell capabilities and should be seeing the field as much as all the true Super Star RBs in this league. Latavius Murray.

Whenever I start to talk about Latavius I cannot just stop talking about how good he is. The Power/The Slippery Shiftiness. But then there is one big issue. The Raiders are running a Rotation at RB that makes no sense.

Sometimes the 5’8 207 Jalen Richard is taking 3rd and short carries. Sometimes it is the 5’8 190 DeAndre Washington. Even when Latavius Murray scampers for a 22 Yard TD on his first carry of the game. The 6’3 230 RB is often on the sidelines during critical plays for the Raiders offense.  I get it if you want to rest him when you are on your own side of the field, but there are times where Latavius is not even playing in the RedZone.

Not to mention the potential of Jamize Olawale to score a TD, which he has already vultured one from Latavius this season.

Despite all this. All of this.

The Raiders offense is primed to finish among the top in the AFC. It is a very long season and even though the rotation will keep Latavius Fresh and off the field. The more season goes on, the more Latavius will be going up against defenses that are beat up while Latavius is always running in peak form. Ya the RB rotation is not looking good as every 2 carries Latavius gets, 2 go to his backups. But sooner than later those numbers should increase as his talent is too good to ignore.

When Carr has that offense turned up to the level they should be at. Latavius Murray will be the every week RB1 you can depend on. Right now his trade value is very low, but all it takes is one game of him dominating the carries before it shoots up to Top RB1 value. His matchup against the Ravens does not look good on paper for his Fantasy Owners, they are panicking. Come in and swoop LOW on the BEAST.

The season is a long one, and it really is to your advantage to signup for a BEAST PACKAGE with me. You can get Weekly Help for as little as $12. One makeover to completely re-model your team and give yourself the BEAST chance for winning. No other Expert Site puts in the hours of dedication and studying to the game that I put in. This is my life and this is what I do. 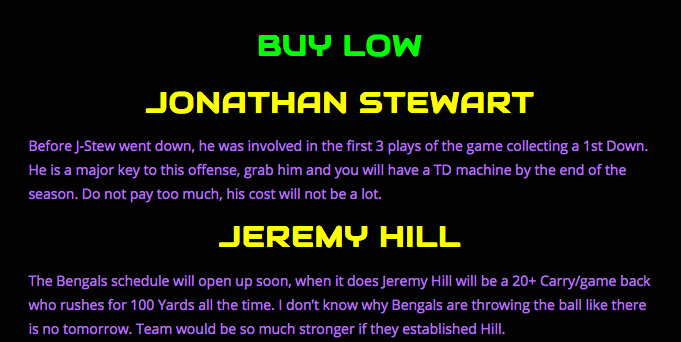