Wednesday 2:28 AM.  I just woke up from a nap after helping VIPs for 6.5 Hours straight in Google Hangouts with screenshare/Waiver Wire/Trades etc.

My mind is foggy my passion is burning through my skin.  I saw my FantasyPros Rankings, again.  Yes once again I feel I got robbed and you will too when you see what happened.  FantasyPros ranking system has changed whether I want to admit it or not.  This is a site where I use to be the BEAST of the BEASTs, and now they are putting me at the BUSTs of the BUSTs.  Why?  Is it because I am not following the FantasyPros code of just labeling all the players the same and if we win together, we win together, and if we lose together, we lose together.  No Fuck That!

I beat to my own drum.  I spend hours among days doing research for my next week Rankings.  All of the mainstream websites already post week 3 Rankings.  How can they post Week 3 Rankings on Tuesday?  Do they watch all the footage from Sunday again in one day.  Do they even care if they are right.  Is that what it takes to be an Expert?  Just throw Rankings out with one day of research?

Regardless, Fuck the Noise. I know I am the best and below I will prove it.  If you want to focus on one position while reading this article.  Read RB.  That is where I really felt I got robbed.

RGIII hurt me no doubt in QB Rankings this week, same with Brady.  Besides that pick, the picks on the left are clearly more dominant than the picks on the Right from Week 2.  Colin Kaepernick #8, I put him #18 (248 Yards/1 TD/3 INT).  Everyone was all over Jake Locker, I saw the Vegas Trap in him.  I was higher on McCown than any expert who actually finished as the #9 QB in Week 2.  That’s fine if RGIII hurt me in QB Rankings, as long as Jamaal Charles hurts everyone else in RB Rankings I am fine. 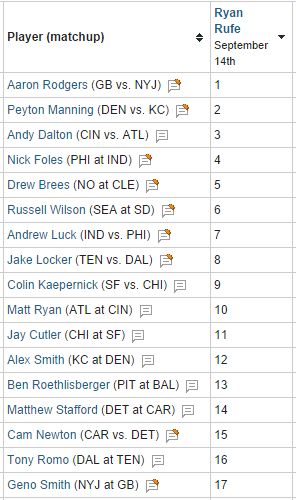 JOSH MCCOWN OUTSOCRED ALL OF THESE CLOWNS BELOW.

RANKED #29 in his Rankings. 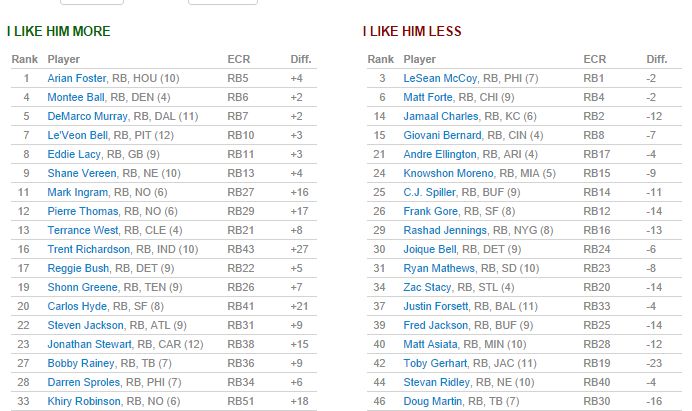 Arian Foster obvious BEAST PICK.  Murray ahead of the Experts helps.  Mark Ingram/Terrance West Picks BEASTED the competition.  T-Quizz did his thing on MNF.  Jonathan Stewart was a good pick, Rainey as well, lets give some love to Sproles.

Matt Forte good pick.  Jamaal Charles I ranked #14, his ECR was #2.  That means if you ranked him #3 or lower, you thought he was a BUST.  I ranked him #14.  Ellington/Moreno/Spiller/Jennings/Joique/Mathews/FJax/Gerhart/Martin all good picks. 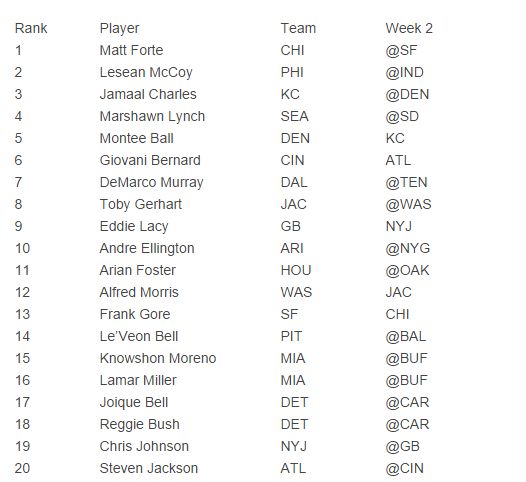 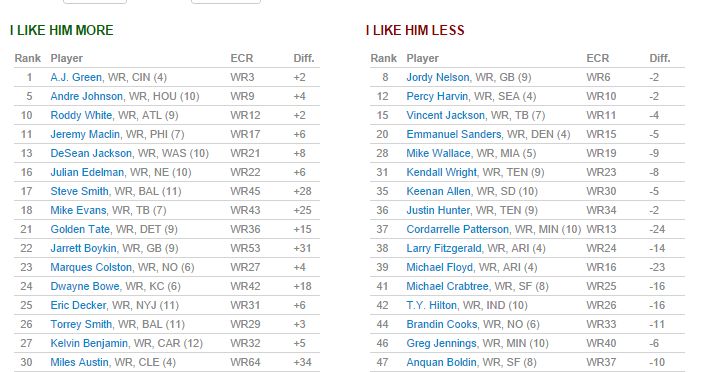 I’ll admit when I am bad, last week I had some bad picks.  Green/Desean got injured on me.  Mike Evans did nothing “BUY LOW.”  Golden Tate turned into a ghost after the 1st Quarter.  Bowe was not ready for a debut while Boykin was benched.  Miles Austin pick was nice, as well as Edelman.  Still a lot of bad BEAST/BUST picks.

It is what it is.  I wasn’t great, I don’t think this guy was so great either.  Wright/Patterson/Fitzgerald all BUSTS when I ranked these guys in the 30s.  It is what it is. 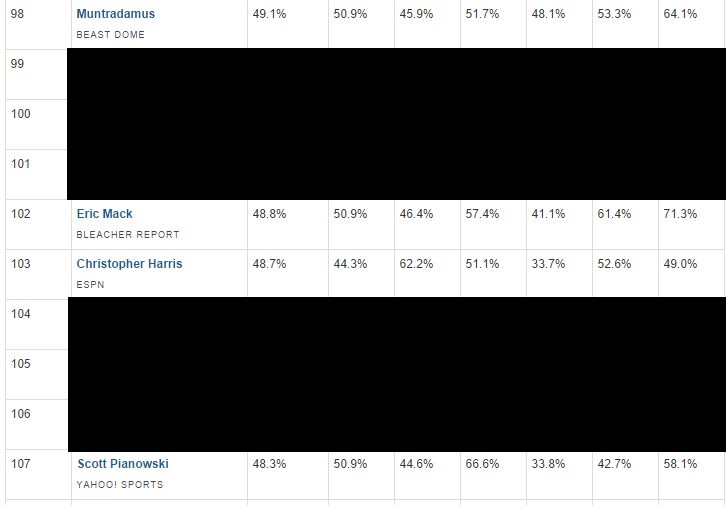 Look.  I can keep complaining about my IDP #s how I had Von Miller #2 (7 Tackles/Sack) when everyone else had him outside of the Top 30.  I had Stephen Tullock #6 (10 Tackles/Sack) when everyone had him outside of Top 25.  Or Michael Bennett in my Top 15 who got a sack, even my great DB picks with Dashon Goldson 30 Picks above the experts.  I can even rave about my Kai Forbath/Randy Bullock dominating the Expert picks.  At some point in this season, I have to realize.  Nobody is out there to help me in this industry.  I am not a big name corporation.  I am one man who is doing it all and sacraficing every hour of my life for my dream to come true.  While the other experts probably sit at home with their wife and are counting down the hours until the next Law and Order Episode.  Only to realize, they missed it yesterday.

I am happy with my journey.  I will continue to BEAST.

No Expert can do what I do.