Somewhere Over the Dwayne Bowe

If this is your first time on BEASTDOME.com, you missed arguably the most important Waiver Wire article of the year from any Fantasy Football site.

Besides telling everyone to add Jonas Gray, the most important was Kenny Britt. Kenny Britt is the WR that needs to be owned in every league, and if you are late now, you will never be able to make it up. In fact that Waiver Wire article is so great, I am going to repost it here just to prove to you once again that BEASTDOME is always ahead of the curve. 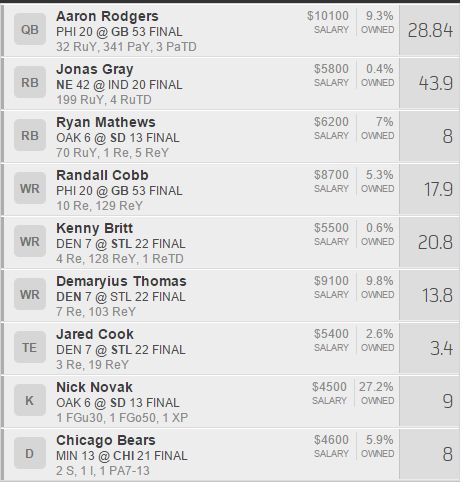 Before I send you to the Waiver Wire article from Week 8-9, which is the exact same players you should be targeting in all leagues if they are still on the wire. The last player I want to talk about is Dwayne Bowe.

Bowe is probably the best WR with a horrible QB in the NFL. While many want to argue against Alex Smith being titled as, “horrible.” Truth is no Fantasy WR/TE can really enter that top tier level no matter who it is. With the Chiefs playing in Oakland on Thursday Night Football, you can guarantee two things.

1) The Raiders will do everything in their power to shutdown Jamaal Charles after he torched them for 5 TDs and over 200 Total Yards.

2) The Raiders will trust D.J. Hayden to cover Dwayne Bowe one on one all day.

It is amazing that Bowe does not have a TD yet this season, and Alex Smith has been repeating constantly that he wants to get that achievement out of the way. Eventually this statement on repeat does not mean that much, but the matchup is perfect for Bowe to finally have his breakout game on Thursday Night Football.

All your Waiver Wire moves have to be about winning now, and adding Bowe is a move you need to make now.

TEAM BEAST DOME is so deep at WR that there is a good chance Bowe does not play on my team. Simply because Kenny Britt is the real deal and a Must-Own #2 WR in all Fantasy Football leagues moving forward. With that, here is the Waiver Wire you should of read 3 Weeks ago that would of saved your season and put your team in PRIME position to BEAST for the stretch run.

If you are like much of the BEAST DOME NATION. Arian Foster and his 3 TD performance led you to an easy victory in Week 8. While many of you are still fighting in MUST-WIN mode, there are a few good free Agents that fell to everyone in the Fantasy Football World. All of these players are good adds and should be picked up in just about every 12 man league that has a deep bench.

It only took Rex Ryan 7 losses to finally make the switch to Michael Vick. The Jets waited too long to make this switch as this is now purely a Fantasy Football situation for the Jets moving forward. Michael Vick will make this offense dynamic right away and everyone from CJ2K to PERCY HARVIN will all see a boost in production. Michael Vick has a tough matchup against KC this upcoming Week 9, but a QB everybody should stash if you are desperate for a backup. 100+ Yards rushing is never out of the picture for Vick.

The Patriots are going to use Jonas Gray as if he were Stevan Ridley. After tearing up the Bears for 86 Yards on 17 Carries, the sky is the limit for Gray as he cannot be tackled when defenses spread wide for the Patriots passing attack. Jonas can easily be the Steven Jackson that everyone is waiting for and probably benched Week 8, and then the TD comes. Regardless, Gray has nice RB #3 potential moving forward as he will see double-digit carries every week moving forward. I would still rather have Steven Jackson as the Falcons offense finally showed some life again.

There is rumor that Doug Martin is going to get traded. If that happens Charles Sims will have a clear path for the RB spot in Tampa. If Doug Martin does not get traded, look for a 3 headed monster with Doug Martin still leading the way. Tampa is not coverting any 3rd downs which leaves any Tampa RB with low-end potential moving forward. For now, keep an eye on Sims/Martin, but do not make it a priority to add him unless you see a trade go through.

LaFell has been solid for about 4 Weeks in a row now and can officially be a WR #3 in all Fantasy Leagues moving forward. He is quickly becoming a favorite option of Tom Brady and leaving Julian Edelman as the #3 WR in the Patriots offense behind Gronk. LaFell has always been explosive and is showing what he can do with a superstar QB instead of the wild Cam Newton. LaFell should be owned in nearly every league.

Britt is going to have the green light to run the show for the Rams now that Brian Quick is done for the year. No expert ranked Britt higher than myself after I loved his potential with Shaun Hill. While Austin Davis appears to be the QB until the end, he will have to get chemistry with Britt at some point this season. When the matchups are good, Britt has been productive. Look for a great 2nd half and close to the season as Britt should be a huge factor on all playoff teams.

Looks like the Bye Week was all about making Brandon Myers out of the picture and letting Jenkins run away with the TE job. Jenkins has HUGE size and is an immediate big-time threat in the Bucs passing game. Huge fumble ended up costing the Bucs this past week, but he will continue to get all the targets he can handle. Jenkins can easily be a Top 10 TE to close out the year and is a must-add in all leagues.