I do not know how this guy keeps getting jobs. 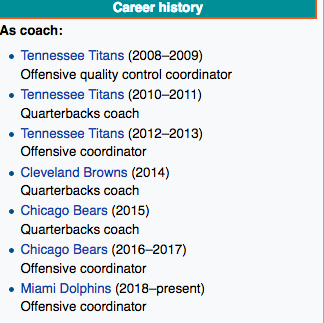 Dowell’s track record continues to get worst everywhere he goes. Going to Miami this year, a team that lost Jarvis Landry this offseason and their best player in Jay Ajayi in the middle of last season. Dolphins are heading towards a terrible 2018 and signing Dowell pretty much puts the final stamp on that. Dowell did not leave any team better than they were before he got there. Bears/Browns are not even close to playoff football teams, and Titans finally got to the Playoffs for the first time since 2008.

This move makes every Dolphin pretty much undraftable.

Wilks is best known for turning the Panthers Defense into a Super Bowl Caliber Defense a few years ago. Going to Arizona, the Cardinals are showing they want to be a defensive minded team that wins ball games pounding the rock with David Johnson. If Wilks can bring this mindset to the Cardinals and turn them into a Ray Lewis Ravens type of team that does not rely on lighting up the scoreboard but controlling the clock and winning with their defense, than the Cardinals can definitely win games.

This moves helps guarantee that David Johnson will be a touches on touches monster.

This was not a good move. McCoy was horrible calling plays for the Broncos last season, he likes to throw the ball, he does fit Wilks system at all with letting defenses win game. Case and point last season with the Broncos. All of their QBs threw way too many INTs and the gameplans were too aggressive. If McCoy tries to make too much happen with Sam Bradford before Josh Rosen is ready, the Cardinals will not be winning games.

It is hard to turn a QB minded coach who has been a QB Coach and OC his whole career into a coach that believes in running the ball. Cardinals fans can only hope the change happens in McCoy’s mind.

This move does help give Larry Fitzgerald a good amount of targets each game to be reliable. For the Cardinals sake, Mike McCoy has to change his style if the Cardinals want to win.

Matt Nagy is straight under the Andy Reid system. Nagy has been with Reid since 2008 back in Philadelphia, and it took 10 years for Nagy to finally get his own team. Now at the age of 40, Nagy takes on a Bears team that really lacks anything through the air. Maybe signing Allen Robinson will help, but the Bears are a ground and pound team. Nagy will have to take something out of Andy Reid’s playbook and make this team capable of throwing 250+ yards a game for them to be relevant. Nagy did do a good job leading Alex Smith in KC to a revitalization as OC.

Boost for West Coast Offense and moving the chains. Will definitely be better than 2017 now that Dowell Loggains is gone.

The Bears decided to stick to the ground and pound with this move. Mark Helfrich is famous for being the guy with Chip Kelly who turned University of Oregon’s offense into something special. He was the OC under Chip from 2009-2014, when Chip went for the NFL, Mark took over as Head Coach.

Trubisky does not have as much speed as the typical Oregon QB, but he does have wheels and he has an arm that can throw on the run. This move definitely gives Jordan Howard + Tarik Cohen a big boost as the Bears are intent on being a run 1st/2nd/3rd team. Grabbing a center as the main offensive upgrade supports this claim.

Big Boost for Jordan Howard more than anyone. Tarik Cohen will get more touches this year, but it is really Howard as the only Bear RB you can count on week-2-week.

Great move by the Panthers as Norv Turner is the perfect fit for Cam Newton, Greg Olsen and Christian McCaffery. Norv ran the vintage LT Chargers offense back in the day getting LT big time yards and Antonio Gates easy TE#1 numbers. You can expect Norv to make the game easier for Cam Newton and set him up with a very unpredictable game plan each week.

The latest greatest achievement for Norv Turner is the fact he turned a Case Keenum lead Vikings Offense into almost a Super Bowl team. Cam Newton and Norv Turner can easily be Al Pacino and Jamie Foxx in, “Any Given Sunday.” Panthers offense is taking a step forward.

BOOST for all Panther players.

About time the Seahawks got rid of Darrell Bevell. If there was one OC who wasted more talent than any OC in the last few years, Darrell was that guy. Darrell was famous for running the ball on 1st down/2nd down, then leaving Wilson with a tough 3rd down conversion. He may have also been the one who told Wilson to throw it on the 1 yard line.

Schotty is a great OC. The guy is a living legend and was the QB Coach for the Chargers when LT was starting his careeer, but most notable was probably running the Jets offense during the Chad Pennington days for the Jets. Schotty is not afraid to throw the ball down the field, and you can guarantee that he will use Russell Wilson to the MAX with high IQ. Look for the Seahawks offense to be better than ever in 2018.