Last week we saw Leonard Fournette show that he is going to be matchup proof for pretty much his entire NFL career. New to BUST of the Week, I am going to show you all my Bust Plays from the previous Week. I do not bat 100%, but you will find week in and week out, my Bust plays are gamechangers. 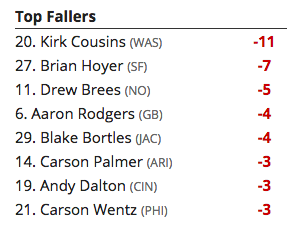 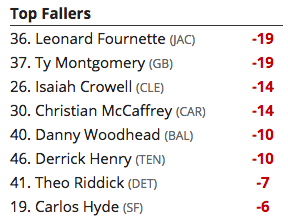 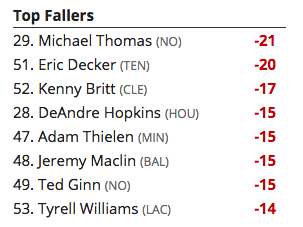 So while Leonard may have been the feature BUST of the Week. I had a lot of BEASTLY Bust call, and I will improve those numbers each week you wait and see.

Patrick Peterson will likely be staying at a Hilton the night before he goes up against T.Y. While Hilton has breakaway speed, Patrick Peterson is easily the best cornerback in the NFL and it will take a near perfect game from Jacoby to get T.Y. the Fantasy Stats he needs. The pressure from Arizona’s Defense on the weak O-Line for Indy is going to force Jacoby to throw the ball before he wants to, or take the sack. If you own T.Y. Hilton do yourself a favor and stay at a Holliday Inn.

Sheep Pill Hill scores a long TD on broken coverage in Week 1, and all of a sudden Sheep think they are an expert who stayed at a Holliday Inn. Tyreke goes up against likely Jalen Mills all game. While Tyreke is fast, Mills can hang with his speed and the Chiefs O-Line has their work cut out them all game long, forcing Alex Smith to throw the ball earlier than he needs to. Eagles Pass Rush Dominates the Patriots Pass Rush, not going to be a great game for Hill, nor a great season.

The Ravens Defense is playing top notch caliber football right now. Crowell will be featured for the Browns until they fall out of the game, which could be a lot sooner than later. Once the Browns fall out, Kizer needs to rely on his ability to make plays with his legs, which already sounds like a loss for Cleveland when he tries to run against those Ravens Linebackers.

GET ALL MY GAME BY GAME. STAT PREDICTIONS + DAILY FANTASY ROSTERS WITH VEGAS FANTASY BEAST

HAVE A BEAST SUNDAY