This article has not been back since the Week I won my entry into DSFC.  The reason I am sharing this with you is so you can make $$$ in Daily Fantasy Leagues, win your Fantasy Football Championship, then Sign up for a V.I.P Package for NBA when you want to have a fun week of enjoying Basketball like you never have before. 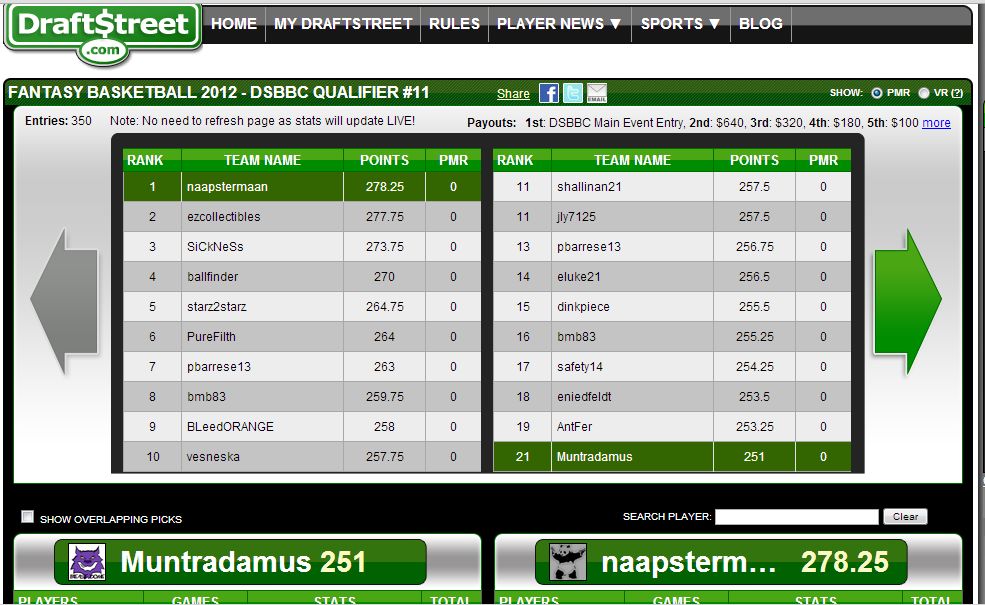 To learn more about the service, follow the Link.

Check Out the New BEAST DOME chat and get your Fantasy Football questions answered.

Thank you all for trusting BEAST DOME as your primary source for Fantasy Sports. Rankings Coming Soon.

*All Rankings Will Be Finalized Show In The “VINTAGE BEAST DOME RANKINGS” coming later this week.

Tony Romo in a do-or-die situation.

History would tell us to bench Romo, but history was meant to be broken.

Romo needs to win this game to keep the Cowboys Faith on his side.  If this team does not make the playoffs, Tony Romo will not be a Cowboy much longer.  Jerry Jones did not build the Jerry Dome to have a team that fails to make it to the postseason.

You gotta feel bad for Chad.

He is playing great football, and has likely done all he needs to prove to be the 2013 starter with one more good start against a bad Titans secondary.  But, it is looking very probable that Tim Tebow is the starting QB for the Jaguars in 2013.  There will be be a Henne/Tebow controversy all season, and Sunday Henne is going to do enough to win over a lot of Jaguar fans.

You read it here first.

Russell Wilson is a Top 10 QB against a Rams Secondary that is very beatable, not to mention BEAST MODE will be demanding safeties in the box or the Rams will be in for a very long game.

If Michael Vick is going to land a huge contract this off-season.  It will have to be earned in this Week 17 showdown against the Giants which could eliminate the Giants from making the playoffs, and give Andy Reid one last hoorah before his Eagle tenure is over.

Vick wants his payday. If he is not inspired to have a huge game, than he remains a high-risk/high-reward QB for 2013.  If he has a big game, and goes to the right team in the off-season.  You better believe everyone will predict HUGE numbers.

The Bills are a Franchise that is heading in the wrong direction.

But this Sunday..They have a chance to end 2012 on a positive note beating the laughing stock of the NFL, the New York Jets.  The crowd will be electric, and C.J. Spiller will be the owner and main employee of the electric company for the Bills.  You can expect long runs, and plenty of runs nearly every play as C.J. will bring FIREWORKS to your Fantasy Football team on Sunday.

He could put up a historic game.

While all the signs are pointing to benching CJ2K in Week 17 for fantasy owners.  Sometimes you just need to go with the fact that a player of his caliber can break out a long run at any time against this terrible Jaguars run defense.

Jake Locker has been horrible, which was the downfall to CJ2K as his days with Matt Hasselbeck were more than fine.  If Locker can be somewhat decent in a great matchup, than CJ should benefit for his fantasy owners.

Each player has their tendencies.  Some players do well in certain matchups, some in certain situations, but the tip on Reggie Bush is.

When Reggie is hot. Reggie is unstoppable. Like a Kim Kardashian Sex Tape, he will give you a performance that will make you want to watch on replay over and over again.  Reggie is playing for a payday, and if he wants to remain a Dolphin for life.  He will have a performance to lead the Dolphins in a season finale win against the Patriots right before Tom Brady gets ready for his Superbowl run, in New England.

The season is coming to an end for the Chargers.  A terrible season that will leave a team that has trouble selling out, even more trouble next season.

If one good thing came from the season, Danario Alexander was that piece of gold.  Expect Phillip Rivers to put it on a display for all of the Chargers fans to get excited about heading into 2013.  The Raiders pass defense does not have many answers for a WR like DNX.

Now is the time to Ride or Die. DNX.

Joe Haden will be draped on Mike Wallace like a teenage girl over a Twighlight action figurine.

When that happens, it is usually wise for the QB to attack Buster Skrine and Sheldon Brown.  Which means Antonio Brown time who is easily the #1b WR in that Steelers offense.  Brown has the moves like Jagger, and can easily make himself a Sunday to remember.

Just about every Fantasy Expert has written Antonio Gates out of the Fantasy picture the past three weeks.  I have been the only one ranking him inside the Top 8 the past couple of weeks, and he has performed with back-to-back TDs.  Including BEAST DOME ranking him higher than any site last week.

With no more Malcolm Floyd as a potential TD threat, Gates should be looked at even more in the redzone, especially in his season finale against the Raiders.

If you have been on the BEAST DOME kicker bandwagon.  Matt Prater was the kicker who was consistently ranked higher than the other experts who I’m sure many of you have going into the championship game.  Mason Crosby has been the 2nd kicker who is picking it up, but Prater is the King Leg right now.  Especially with the Broncos scoring on nearly every drive.

If I’m going one sleeper defense this week to have a return TD.  The Bills would be that selection.

Bills fans want nothing more than to end the Jets season with a blowout loss, in Buffalo.  Expect an inspired and electric group to show up.