Arian Week continues here at BEAST DOME as this entire Week is here to help you get over the loss of the beloved BEAST DOME legend Arian Foster.

Now you have a Texans team that is going to lose more games than win games, especially with the way that defense has been tackling as of late. Key for the Texans is to stay close in games, because if they do Alfred Blue is the type of RB who can easily rush for 100 yards. You look at the one game the Texans won this season without Arian, Alfred Blue racked up 31 carries for 139 Yards and a TD. Arian Foster would never see 31 carries in a game. Look at 2014 when Arian Foster was out, the week they won against Cleveland Alfred Blue racked up 36 carries for 156 Yards. Clearly if the Texans have a chance of winning, Alfred Blue is going to BEAST.

The real question is Chris Polk worth a pickup? The answer is without a doubt yes. The Texans run a no huddle offense and lead the NFL in pass attempts as a team. Chris Polk is easily an upgrade over Theo Riddick who will see plenty of time on the Football field. Polk has never reached 4 receptions in a game all season with the Texans, but now Jonathan Grimes is an after thought in this offense who was seeing some quality time when Arian was out early in the year. Chris Polk should be able to record 5 receptions every game no problem, which could equal 5 Points alone in a PPR league. If the Texans have a bad matchup, Chris Polk should be an easy double digit player in the Texans no huddle offense.

The question is, who to grab between the two if you can only grab one between Alfred Blue and Chris Polk. To answer the question let us see the remaining schedule for the Texans. 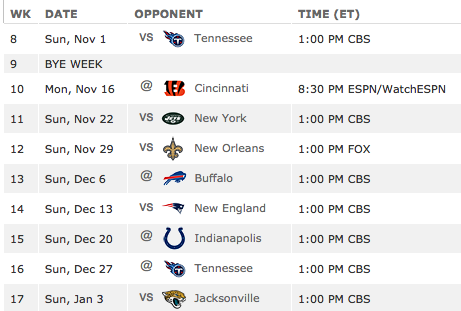 Week 8 definitely has the makings to be one of those 30+ Carry Alfred Blue games. The same can be said about Week 16 and 17. Besides those two games, the Texans seem destined to lose everything else which will make Chris Polk a factor. Blue will always be the RB who see’s the most carries and Polk can never take too much of the load because he is a small RB who does get lit up a lot. Still the remaining schedule does favor Polk once the Texans get out of the Bye Week.

Still, you need to go after Chris Polk in all leagues as he will see a lot of action in the passing game and potentially garbage time. Week 11/13/14 scream for Chris Polk to out touch Alfred Blue. Week 10 will be a modest split, and Week 15 we could see the Texans grind with Blue to try that one big upset. Keep in mind that Alfred Blue can catch the ball and lineup where Arian was as well, and he has a chance to be the Arian version 0.2.

Regardless of these two RBs and their new expanded role. They are not the #1 players off the Waiver Wire this week at the RB position. Stay tuned with the RB Waiver Wire Edition later this evening.