Arian Foster.  A player who is losing more value in his stock than any 1st Round Pick in the most recent weeks.  Arian is now slipping into the 2nd round of some drafts.  Mostly because of Arian Foster Being the Best Teammate he can be.

Texans Cheerleaders took it a little too far.  Warning. Only 10 seconds is plenty.

Today the Texans released Andre Brown.  Andre will be a starting RB on a different team at some point late in the season.  This was a very surprsing move as Andre Brown had BEAST potential in this Marshall Faulk role that Arian is going to be thrown into.

Not only that.  If the Texans gave Arian a breather in the middle of a drive, and two plays later they were inside the 10 Yard line.  The Texans may be inclined to leave Andre Brown in there for a little bit of redzone work while Foster catches his breath.

With Andre Brown gone, the Texans leave themselves with a very questionable backup RB situation.  This move shows confidence in Arian Foster and his role with this offense.

One player stands out.  The potential ‘Wild Cat Specialist’ BEAST aka Ronnie Brown may have something left in the tank.  Ronnie will be nothing more than a Veteran change of pace RB who will need a breather nearly after every couple of plays.  Which is a positive for Arian Foster who can jump right back in for the Redzone if the situation calls for it.

Health and talks of Arian Foster rumors that are so far from the truth have made Arian fall to the 2nd Round of some Fantasy Drafts.  As Arian always says on twitter.

The Texans first preseason game was beyond horrible.  Arian Foster nor Andre Johnson played, and the Texans looked like a team that is ready to go 2-14 again.  After the horrible game Coach Bill O’Brien said this. 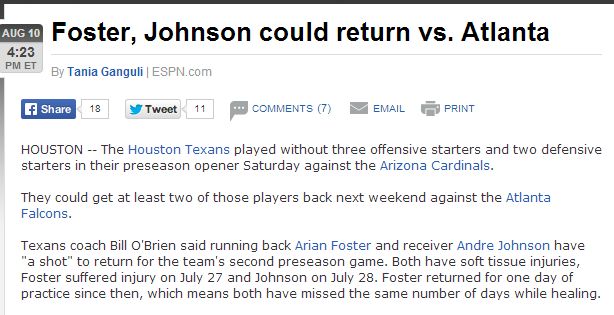 If the injuries that both Arian Foster and Andre Johnson are going through are real or long-term.  They would not be listed as “questionable” for a Week 2 Preseason Game.  If anything they would not even talk about them coming back onto the field until the end of Preseason Week 3.  These are obviously injuries that would not hold these two out of a regular season game.

“First was the “minor hamstring injury.”  To start off, not worried about this.  It is early August, Arian Foster is going to touch the ball 350 times this season, at least.  He is the Marshall Faulk of the Texans.  With no Ben Tate, the Stage is set for Arian Foster to have a MVP Historic season.  I am sure if it was a Week 8 matchup against the Titans, this hamstring injury would not keep him out. Not only would he not be out, Arian would be the #1 RB in Fantasy Football Rankings across the Industry.”

If Arian is playing Week 1 against the Redskins.  It is the 1st Pick of your draft.

Are you really going to let Arian slip?” 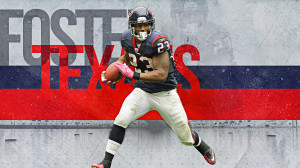