PRAY IN THE NAME OF PURPLE JESUS

It is never easy to lose a superstar, and who knows. There is a chance we did not lose one at all.

Adrian Peterson who was getting stuffed for no gain nearly the entire game, never having a chance to reach the second level, for the second week in a row. Finally the Vikings moved the ball. Adrian Peterson had a nice 7 yard gash, then carried a defender for 4 nearing the redzone, and then the worst thing that could happen happened.

BOOM. CLAP. THE SOUND OF MY HEART

The knee got twisted, limped off the field and straight through a diner in the stadium as over 50 people saw the star up close and personal. 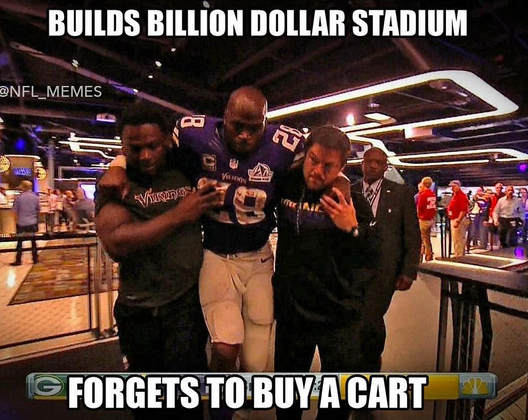 Then we hear the update from coach Zimmer in the morning, he has not ruled out Adrian Peterson for Week 3 with a Torn Meniscus.

To me, this sounds exactly like Billy Bob Thornton in Friday Night Lights. If you have not seen this movie and you own Adrian Peterson. You will be very entertained with the story.

Boobie Miles star RB tore his knee, coach told the team he may be back next week to keep spirits high. Watch the rest of the film to see what happens.

Obviously this situation is not that movie and there is no script. If there is one RB who can recover from this injury like nothing happened at all. It would be Purple Jesus, and Purple Jesus Only.

What I predict in this situation is that Adrian Peterson will sit out Sunday against the Panthers. Zero chance of him playing in that game, and neither McKinnon nor Asiata are worth owning/starting in that matchup.

Then the next game is Monday Night Football against the Giants, back at home in their brand new state of art dome. Yes the same one that had Adrian Peterson limp through the diner with over 50 people watching up close and personal.

Adrian Peterson tells the coach, I want to play in this game. Adrian Peterson plays at less than 80% health, and you have to decide do you start your BEAST in that game. Do you have to own Asiata or McKinnon just in case AP goes final second with his decision?

We will find out, but I will tell you this. Neither Asiata nor McKinnon are good enough to be RB#2 Quality on a Fantasy Football Roster over the next 3 games (@CAR/vs.NYG/vs.HOU).

Adrian Peterson could return after those 3 games, usually the timetable is 3-4 Weeks for this injury if the player does not have surgery. If AP goes under the knife, then he may be out until Week 12. If that is the case, between McKinnon and Asiata.

The player I would want to own is Asiata. He is stronger, he is more physical, he can block, he can catch, and he will get the goal line.

McKinnon is like Warrick Dunn, and even that is too much of a compliment. However if we really want to throw it back, you can look at this exactly like the Bucs Backfield.

In the end if I had to choose one. I would go with Asiata. Fantasy Football is a game of TD’s.

Asiata is the guy who can get them.