I want to start by saying, this is contingent on Tyreek Hill being out for the season. Which based on Tape Evidence, should be enough to say he will not play a snap in 2019.

The Chiefs offense lost Kareem Hunt and Tyreek Hill, the two most dynamic weapons on that offense. While Travis Kelce is no doubt a BEAST, having those guys on the field to attract a lot of attention made life very easy for Kelce. There is no doubt Kelce is the #1 Fantasy TE, but there is doubt that Patrick Mahomes is going to put up the same MVP numbers of 5,097 Yards and 50 TDs. He also rushed for 272 Yards and 2 TDs, which is converted into 40 Fantasy Points, which is equivalent to another 1,000 Passing yards.

Mahomes threw for 300+ Yards only once in the five games he did not have Kareem Hunt. While his TD total was very nice at 13 over that five gamespan. Two of those five games were against Oakland where he combined for six TDs to heavily inflate the numbers.

While I do believe in Andy Reid as a coach/offensive guru, and Mahomes definitely has the arm strength to make big plays happen. A WR core of Sammy Watkins, DeMarcus Robinson, and Sammie Coates. To go along with Travis Kelce. Nobody is doing cartwheels over here, Mahomes will use all of his weapons, even throwing to his RB combo of Damien Williams and Carlos HYDE ‘and go BEAST!

Despite everything I told you, FantasyPros Experts still rank Patrick Mahomes the #1 QB. He is currently the consensus #1, which is really just the most sterotype sheep move you can possibly think of. 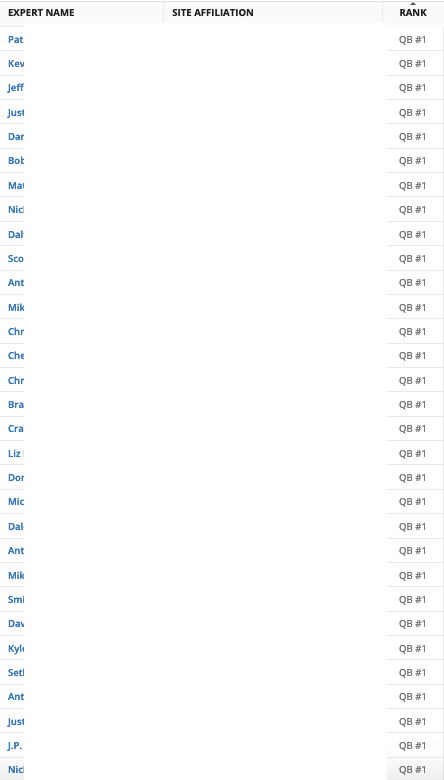 The Chiefs Playoff schedule is not better.

Week 15, home but against a Broncos Defense that should bring some fire in an AFC West showdown. Also who knows what weather we get in KC that time of the year.

If you happen to battle to the end and make it to the Championship! Week 16, Patrick Mahomes plays on Sunday Night Football, against the Chicago Bears, in Chicago. December 22nd, when it is so cold and windy especially at night, Santa Clause might even have his workshop out there.

Mahomes current ADP is #34, which for the “Sheep” #1 QB in Fantasy Football is pretty late. Regardless he is the furthest thing from a target. You literally cannot start Patrick Mahomes in the Championship if you even make it. Remember what Jared Goff did in Chicago on Sunday Night Football? He finished with negative Fantasy Points in that game, 4 INTs! Rams were lucky to move the ball past their own 40 yard line. This is later in the year when the snow and wind can make this game un’bear’able. You see what I did there.

So even if you have solid games from Mahomes through the year, however two tough matchups against the Jaguars on Week 1, and in Baltimore Week 3. Losing two games early on is never a fun journey to come back from. However no matter what monster stats Mahomes gives you, he will not win you a championship. Sounds like the next Russell Westbrook or James Harden. Most important of all, Mahomes will not be a #1 QB in Daily Fantasy Football nearly every week, that is more than guaranteed.

Did I mention he is also on the cover of Madden?

If anyone in your league drafts Patrick Mahomes, you can think in your head. Wow this person is a sheep that is being controlled by the masses. Either be a sheep or be a BEAST.