If there is one player who is getting way too much love in the world of Fantasy Football. Martavis Bryant is by far one of the leading candidates. I was never a fan of Martavis and his “All or Nothing” type of style in 2014. Yes the Touchdowns came in bunches, as well as the production. Still, Tavis failed to record double digit targets in any game, as well as only averaging FOUR targets per game in his last 6. Not to mention he only averaged a shade above 5 Fantasy Points (standard) per game during those last 6.

While many expect Tavias to be a BEAST in his 2nd season in the Todd Hailey offense. 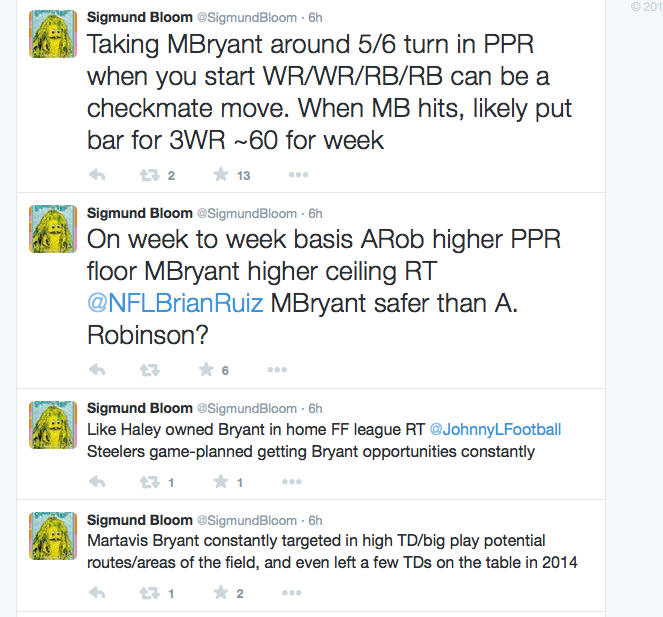 I am here to tell you that Martavis is not worth your time this Fantasy Football Season.

In my June Rankings, I always held Martavis outside the Top 40 due to the fact he was the #3 WR in the Steelers Offense behind Wheaton. When Big Ben came out publicly to the Media saying that Markus Wheaton is the #2 WR and ready to have a big season. A few experts backed off. Some pushed even harder. You can see my current ranking below.

John Paulsen of 4for4.com easily the most overrated Expert who cannot point to one good call he has ever had, claims he is not threatened by the comments of Big Ben. The Experts on NFL Network are hyping up Tavis. These people are all wrong and are afraid to go back on earlier comments.

The saying goes. “Once you dig yourself into a hole. Stop Digging.”

The best thing that can happen this Fantasy Football Preseason is a long Martavis TD catch. Not only will every expert jump back to ranking him in their Top 30, but they will encourage you to burn an early/mid pick on a player that will burn your Fantasy Football team. If you decided to jump on the Tavis bandwagon last season, this is how your season closed out.

Only one game that broke double digits for Tavis, in arguably the matchup where you bench him since the Bengals have a respectable pass defense, and you cannot take the combined 3 Points from Week 12-13.

Martavis Bryant should have never been hyped to begin with. Every Expert is in love with the deep ball, which shows that all Fantasy Experts lack the Fundamental’s of what it takes to build a Championship team. Sure that long TD feels great, but do you really want to play an all or nothing type of Fantasy Football Style?

On the Week 13 game where Tavis was able to put up 109 Yards and a TD. That TD did not come until the 4th Quarter as he only had 15 Yards heading into that catch.

If you think Martavis Bryant is the only BUST the other Experts are promoting, you are mistaken. Luckily for you I will go over most of them this preseason, but if you want to see my BEAST picks. Signup for a VIP PACKAGE TODAY. Whatever you do, do not waste your money on any other site, purchase Rankings that are actually custom made by someone who has more success in the (Daily & Season) Fantasy Football World than any Expert.