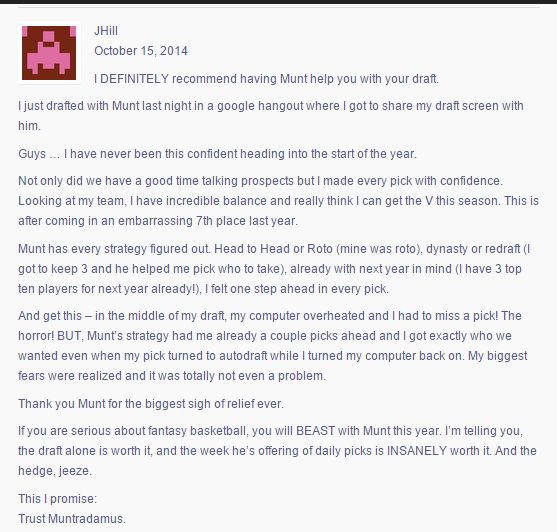 This is the most baller Fantasy Basketball team anyone can have. Best part is, it is a Fantasy Basketball National Championship team on NFBKC that can net $10K and national exposure. There are fantasy basketball packages when you read below. FantasyPros is also expected to make an annoucement in the coming days of the Top Fantasy Basketball expert in 2013-14, and lets be real. It will likely be me.

All content below comes from Muntradamus.NET on the player analysis. To purchase the package and learn all about it, follow this link.

And now ladies and genetleman of the journey. The greatest Fantasy Basketball team known to the world.

PLAY SONG BELOW.
KEEP STARTING OVER WHEN SONG STOPS.

CP3 is a BEAST and will be the league leader in assists no problem at all. There are nights Paul forgets to score, but he will just put up 18 assists instead. This guy is a nightmare for defenders as you simply cannot guard him and then all of his assist options knock down the shots.

Wade is going to need to play big every night for the Heat this season as Lebron James is no longer there. The durability of Wade playing back-to-back or even 30+ Minutes consistently is an issue. Still he is shooting more 3PT shots and remains a nice steal if he falls on draft day. Right now he is a 4th Round pick at #34, I would rather go Klay Thompson.

Crawford is unstoppable off the bench, but the amount of scoring options for the Clippers continues to grow and Crawford becomes too risky of a player to start in most leagues. He will knock down the 3PT shot, he will get the steals and assists. He will definitely score the points, but there will be nights he leaves you dry.

KB24 is back and 100% this season. Lakers are built around Kobe to ball and he is showing that MVP flash right out of the gate this preseason.

A lot of doubt on Josh Smith this season, nothing to worry about here as he is a BEAST that is probably the best steal/block/3PT player in the game today. He will hurt your FT% but he is fun to watch as some nights he plays like Lebron, and others he plays like you.

Deng is going to be the guy for the Heat. When Wade is there, it will be Wade. But there will be a lot of games Wade is either tired or just not himself. Count Luol to be the BEAST when that time comes and fill up the stat sheet.

Rudy Gay is going to take that next step now that Isaiah Thomas is gone. Time for Gay to bomb it away every single night 20+ times a game.

Booz crooz is going to be a 20/10 guy for the Lakers this year. Preseason minutes holding back his potential, but the Lakers will use him as the #2 option to Kobe.

D12 was a monster to end the year and should continue to get better. Strong BEAST ready to put up HUGE numbers moving forward. No Parsons means Dwight needs to put up numbers.

Monroe is a solid 18/8 every night, easily most talented offensive player on the team. Monroe should be the focal point of the offense with a block/steal combo every night.

Waiters can slash with the best of them, but now he is taking a lot of 3PT shots in the Lebron James offense. Good news is he is knocking them down as well. Time to draft Dion in all leagues as a late pick for 3PTM. His upside is too high and James Jones is his backup.

All 3PTM. Too much Jamal Crawford to really trust J.J. besides his Kyle Korver potential in less PT.

C.J. will either start at SF or play backup SG/SF. Regardless a ton of minutes for Miles this year are coming and you better have him on your roster as he will have to score 15 Points a night by default.

Nick Young will miss the first two months of the season, but even off the bench Nick Young is not as attractive with Kobe back. When Nick Young is there, Kobe will not shoot so much. Young will take a hit, but a good add.

Stoudemire will eventually be getting nice PT in the Knicks triangle offense. No reason not to run it through him as he feels as fresh as ever.

Kanter should be a consistent 2×2 machine for the Jazz this year. Rudy Gobert will take some time, but Kanter is so much better. Now shooting the 3PT shot he will get his numbers as long as his defense holds up.

My players are all superstars. There is no reason I will not lead the league in Points, the first foundation of my Fantasy Basketball team. I have players that count statistics in their heads and are not satisified until they reach a career high every night. No team players, all superstars who know their roles.

Really wanted Tony Wroten, but he was snatched earlier than I expected. CP3 will carry me in assists to the middle, but then Kobe and Wade with their 6+ will push me to the next tier. When you add in Josh Smith racking up 5 Assists and Jamal Crawford with his 4-5 a night. I will be in the top tier.

Dwight Howard will be among the league leaders. Boozer and Monroe should be near 10 a game as well as Kanter helping out. Deng and my guards outside of CP3 should be picking up rebounds every game as well which will leave me very balanced and getting a continue stack of boards every night.

My bench is raining 3PT shots, so if anyone has to miss any time in my starting lineup. I will have a 3PT specialist who will carry me. Wade said he is going to shoot more 3s this season, and Kobe/CP3 are good for 1+ a night. Crawford and Gay will fire away at will, and hopefully Deng does as well. Not worried about the category.

I have a lot of ball hogs. A lot of people that will go 12/17 one night, and 8/22 the next. It is a bag of superstars, and chances are I will be below 50%. Which is why I drafted Dwight Howard. Yes you can knock Dwight for his FT%, but he makes up for it by going 8/10 from the field some nights. With Josh Smith and his erratic shooting, I will need Dwight to get his high FG%.

FEEL FREE TO DISCUSS I WILL ANSWER QUESTIONS ALL DAY