FANTASY BASKETBALL IS BACK

We’re Back BEAST DOME NATION. Fantasy Basketball is here, time to get your NBA LEAGUE PASS subscriptions ready and watch the greatest athletes of our time play the game we all wish we were better at.

With the Daily Fantasy Industry growing to another level, I am 50/50 on deciding if I am going to be releasing Fantasy Basketball Rankings at all this season. Stay tuned for what the VIP Package is going to be. Right now a lot of the energy I am producing is going towards the BEAST HEDGE

While you may say. “I will just look at the other Fantasy Sites like Rotoworld for Fantasy Advice.” You will always be a Year Behind. 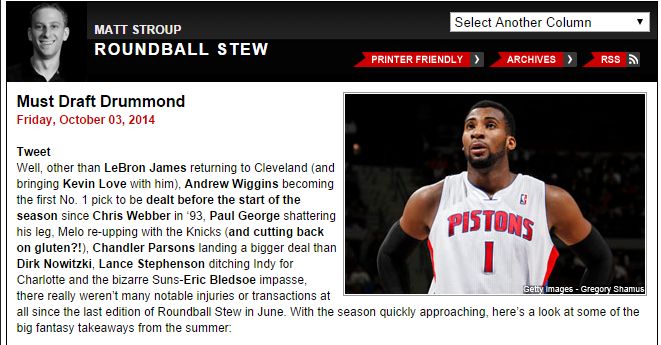 Now the Heat are going to switch gears. The aging Dwayne Wade is going to do his best to go vintage 2007, something tells me as of now that is not going to happen. It is too long of a season to expect 30+ Minutes from Dwayne Wade every night, yet alone playing every single game.

Chris Bosh has a chance to revitalize his game, and while I do like the upside in Chris Bosh, he has to make a complete 360 and change his game back to his days from the Toronto Raptors. I have faith that he will improve and be a stud Fantasy Basketball Center in all leagues.

The real player who is going to take the next step in his game is Luol Deng. Deng was on a Bulls team that never valued him the way he should be never averaging more than 15 shots per game in a season. He then was traded to the Cleveland Cavaliers when they were on a downward spiral to the finish.

Going to the Miami Heat gives Deng purpose again. The Heat need his scoring on a consistent basis more than any team he has been part of. Wade is not going to average 20 Points Per game every night, Chris Bosh can, but nobody else on the Heat have what it takes to be a go-to option. Luol Deng is finally in the right place to be the Fantasy Star he can be. Luol Deng has to be his own version of Lebron James. It takes players like Luol Deng who can do a bit of everything to win you your Fantasy Championships.

Guy Gorgui is a special player in the making. He knows how to rack up Fantasy numbers with the best of them, and with Kevin Love no longer in town. The floor is open for Gorgui to make a HUGE Fantasy Impact and be a Double-Double machine, even off the bench (if Pek is in foul trouble). Thaddeus Young is the new PF in Minnesota, and while I am a HUGE fan of his game, there will be times where the T-Wolves could decide to go BIG and roll out a lineup with Rubio/Wiggins/Thaddues/Dieng/Pekovic. It is also a very long season, and Pekovic has a injury history with foot problems. Pek is also very slow for a Center in todays NBA, regardless Dieng will be seeing plenty of playing time this year.

You also do have to worry about Anthony Bennett who will be in the mix for a lot of playing time at the PF spot. Still there will be a time when Dieng gets his moment to shine, he is too talented not to. As a Rookie in the Final Month of the season, he averaged 11.9 Points/10.7 Rebounds, and that does not include his breakout performance of 22 Points/21 Rebounds in the middle of a strech where he scored 44 Points and had 44 Rebounds in his first three games with major minutes.

Gorgui is by no means a Top 20 Center in Fantasy Basketball right now, not even Top 30.  But when the opportunity presents itself, you will be saying Dienggggg all year when you look at what this athletic big man can put up numbers wise. Easy Double-Double Machine.

Grab him late and stash him in all leagues. When the moment comes to use Gorgui, you have yourself a player that is almost as valuable as Dwight Howard and you drafted him at the very end of your draft, if not the last round. You have to use your last pick wisely in Fantasy Basketball, you might as well spend it wisely.