Due to my success in Daily Fantasy Baseball and wanting to play Nate McLouth in Daily Leagues on Tuesday for the Fan Duel Championship.  I had to wait an extra two days to post the Waiver Wire.  I know as a Beast Dome member you are expecting more content.  And more content will come as the season continues, to the point to where we are back to everyday articles.  Right now I am in a Daily Fantasy Baseball Zone, I will snap out of it soon. 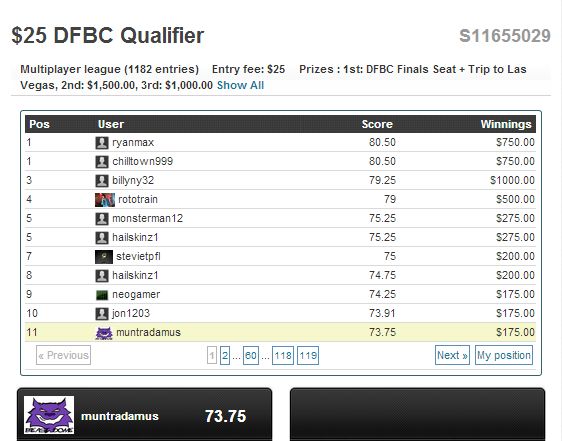 If you want access to me right away, you can have me.

The V.I.P. #3 is purchase is having me at your Fingertips whenever you turn on a computer.  The Testimonials from Baseball last season speak for themselves.

“I just want to say thanks Muntradamus, you will never know how much you’ve helped me all season long. When I first came to this site, it was just to gather some help and move on. I never knew I would stay around all season. Every week, there was new info for me to use in all 5 of the leagues I played in. Then there were those timeless one on one times when you suggested a player that turned out to be a beast all season long. And even when you didn’t answer my question, your suggestions to others helped me. You know your stuff man, lol. I also want to thank all the members, Beast Dome Nation, namely Blue, who also helped me a lot. And now that my baseball season is or has come to a end, it’s on to Football, and you’ve haven’t missed a beat there either. So, thanks again. I ended the season with 2 Championship teams and 3 – 2nd place teams. In one league I was in first place since week 5 and stayed there all season long. That’s how much you info helped me. Not to many people can go through a season like that, IMO. So, thanks dude, you are the man. May you continue to be successful and I’ll definitely be here soaking up all your wisdom. God Bless you, and thanks again.”

*Players to Add Off The Waiver Wire From Week 4*
*Only players owned in less than 50% of Leagues*
*Be a V.I.P. to get even more sleepers*

Hard to find a catcher that is hitting over .300 on the waiver wire at this part of the season.  Yes Hundley’s 3 Home Runs seem a bit fluky at the moment, as well as the .300 batting average.  But Fantasy Baseball is a long season, which means there will be plenty of streaky players to add/drop throughout the season.  Nick Hundley offers you the most season long upside if your team is begging for a desperation option.

Corey is expected to be back by the end of May following knee surgery.  If you have the roster space to stash a player that could explode for 30 HR/100 RBI potential over the course of a full season, Hart is your man.  When he comes off the DL that 58% will be much closer to 90% at the end of June.  I would not wait as Hart can do some serious damage in that stacked Brewers Lineup.

Make sure you keep an eye on Corey and add him the second your team can take a player on your bench.  He goes into BEAST MODE at times.

Valbuena has been the man of the year for the Chicago Cubs.  Out of nowhere Luis who was a Fantasy Sleepers a handful of years ago with the Indians, is now finally putting it all together on a team he was not supposed to be an everyday player.  Luis has 4 of his 5 HR’s in the past two weeks and after Tuesday looks to show no signs of slowing down.

Great Sleeper with a lot of upside.

What if I were to tell you that I had Nate McLouth ranked higher than all the other Fantasy Experts in my preseason Rankings.  Would you believe me? 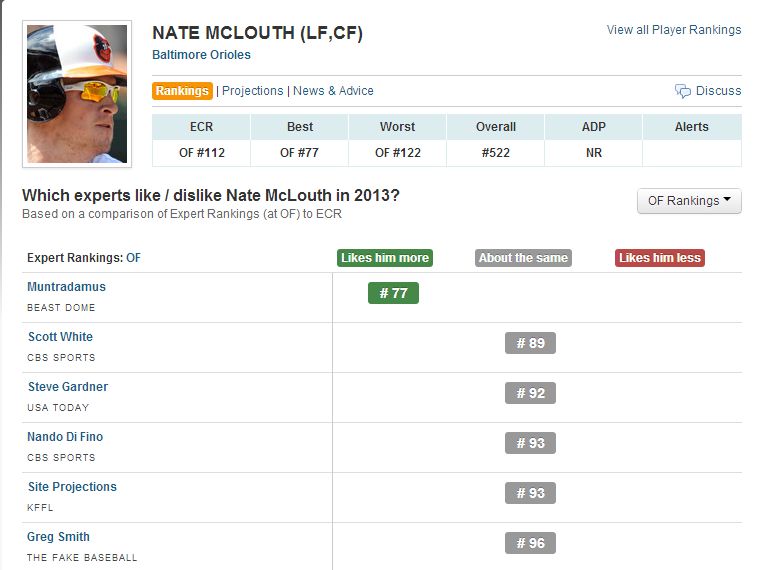 McLouth got a nice boost when Brian Roberts hit the DL.  Which opened up the leadoff spot full-time, and Nate reminded us of his Pittsburgh Pirate days right out of the gates when he was once a 20 HR/20 SB threat.  Roberts is expected back soon, but with the way McLouth is hitting, he will be hitting leadoff the rest of the 2013 season.  Make sure you grab Nate and don’t look back.

Michael Brantley was a popular Fantasy add in 2012 before ending his season abruptly with a sports hernia.  He is not going to wow you, but a 10 HR/20 SB season is written all over Michael, and he makes more of a daily play than a seasonal play at this stage in the game.  If you want the better seasonal player, look no further than Drew Stubbs who was mentioned last week.

It seems like no matter how hard I try, a Houston Astro will always end up as a nice Fantasy Option off the Waiver Wire.  If you can grab Chris Carter at this stage of the game, you could be stealing a player with 30+ HR potential when the season is all said and done.  Carter has amazing power and can take just about every lefty yard if he wanted to.  I would make it a point to grab Carter if you are desperate for power, he is Corey Hart in a bottle.

STREAM OF THE WEEK

With Queen Felix you get more than just strikeouts and a high ERA.  You get a team that will give him so much run support, that 6 INN/4 ER/5 K will be more than enough to earn a win.  With the way Queen Felix is racking up K’s now, he is not only a must-own, he is also a must-start.  While the matchups are always a concern with Felix who seems to run into trouble more often than not.  If the Sox are playing a mediocre team, Doubront has an amazing chance to put up better numbers than Cole Hamels.

This preseason I ranked Tillman higher than any expert.  He was simply the Fantasy Baseball Pitching Playoff MVP of the American League, (Kris Medlen – National League). 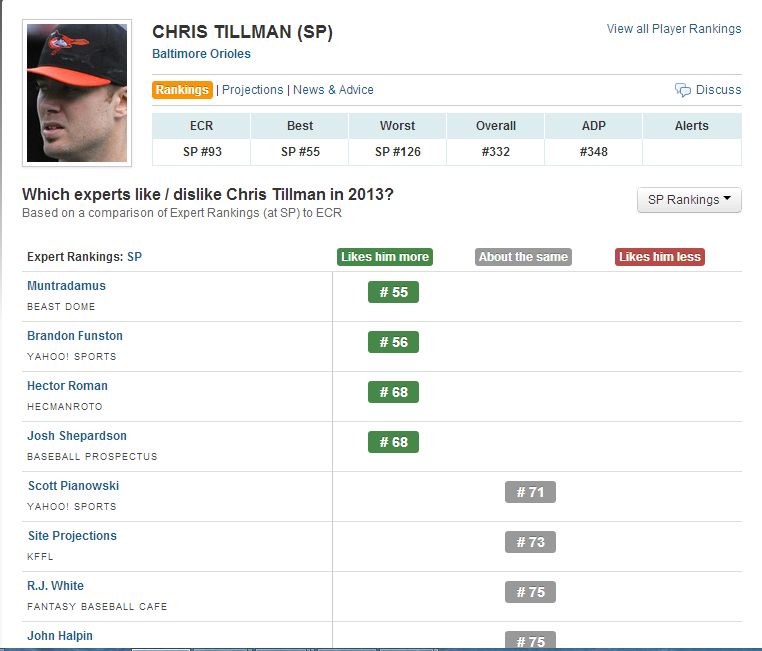 All you need to know about Tillman is word for word what I wrote about him in my preseason report.

“Chris Tillman was the best pitcher in the AL during the Fantasy Baseball Playoffs in 2012. 8 INN shutouts came naturally, and fantasy owners were loving the rookie out of nowhere who finished the season 9-3 with a 2.95 ERA. The K Rate is projected to be below 150. But he is good enough to make up for it.”