Feel free to ask questions below.

How is Team BEAST DOME doing? The one that is fighting for a chance to win over $100K!

First glance of the Standings, not that great at 11th Place. However the team is near the top in R/HR/RBI, has made a big jump in the SB category from 0 a couple weeks ago to now real-time 10, and middle of the pack in Batting average. Not to mention, pitching near the top in ERA and Wins.

Where the team is lacking is Saves and Strikeouts. 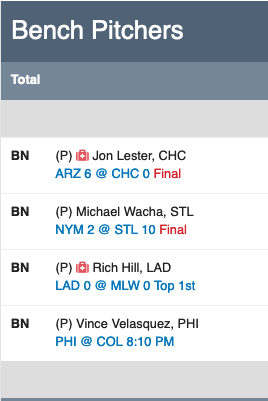 Obviously Saves will be okay. Wade Davis and Sean Doolittle have their jobs locked in. Really wish I grabbed Cody Allen at the end of the day, but hard to argue with the 10th Round Pick of Willson Contreras, 12th Round Pick Andrew McCutchen. So far the 11th Round selection of Ian Desmond has not worked out, I needed the Speed/Power combo, he may start to get a little hot however after a bomb in SD this week. Regardless, there is a closer opportunity on the Wire.

David Robertson may be out only a month, but he was really struggling this season. ERA above 5.40, but his last 3.66 INN have been flawless. Kapler is the worst when it comes to being good on his word with who will close. Even Robertson was getting some holds before going down.

Neris has been great, but he has also been very shaky. The same can go for Dominguez. However keep this stat in mind. Neris has not given up an ER in his last seven apperances, and he was the closer last season more often than Dominguez. Seranthony has been making it tough being equally as dominant with 0 ER in his last six apperances. At the end of the day, Kapler has been turning the ball over to Neris. Neris has been getting the job done.

While Kapler has been a guy to switch things up, maybe he has finally settled on Neris being the chosen one.

However if you have the roster space to get both or even just Dominguez if you lose out on Neris, take it. Seranthony can be a Strikeout Machine and has struck out his last 4 hitters.

Last week it was Giolito and King Felix as the headliners. The Mariners bullpen ruined King Felix easy win, and Giolito had 5 Ks through 2.2 INN before leaving injured. Which means we need to replace Giolito.

If you have the room to keep him great, but our pitching staff bench with injured guys like Rich Hill, Folty, Lester. Cannot keep him on board.

CC Goes to play the Angels, and CC has been pitching lights out this year. He has almost become a Clayton Kershaw quality pitcher on the low key. We are talking today Kershaw, 5 INN/1 ER/5 K, thats what CC has been dealing at Yankee Stadium and he is starting to look like a Must-Start Quality pitcher when he faces a below average team. Especially on the road.

Eickhoff is going to get the start against the Marlins this week, which should be an automatic win. Jared has all the tools around him to win 10+ Games with his eyes closed, with Pivetta down in the minors Eickhoff has a chance to be a very valuable grab.

Swanson looked good in his first start limiting the Indians to only 1 ER in 6 INN while never being in much danger all game. He starts the week off in San Diego, a pitchers paradise. Then he finishes the week at home against a Banged up Rangers team, on a Sunday so they will likely be benching players.

Cashner has been pitching well and gets a nice easy matchup against the White Sox to start the week, then he will follow that up with a 2 start week playing the White Sox again, and finishing up at home against the Rays. The team Cashner just pitched well against. 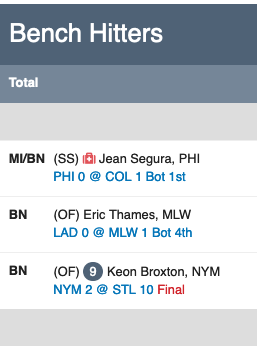 Glaring weakness in this offense is 2nd Catcher. I went against my own catcher strategy, DRAFT GUIDE CATCHER STRATEGY. I really did not have a choice, JT Realmuto went in Round 4, I took Anthony Rizzo the next pick hoping Gary Sanchez would come back, he did not. Strategy was to grab Iannetta and Tom Murphy.

The Rockies let Tom Murphy walk, and they are really paying the price as Iannetta is garbage and injured. Tony Wolters has the job to himself, and it would make sense that he will play everyday maybe until Ianetta returns which could be over a month. Any player that plays at Coors Field automatically jumps up in value. In this case Wolters is the obvious grab as Navarez is hitting the ball too well and Tom Murphy hitting over .400 will still get no PT.

However there are better players than Wolters on my wire, and these are the three guys I would grab instead.

Hicks is hitting in the middle of a stacked Tigers lineup. Well not very stacked, but it seems like they have a lot of guys that can get on base and it is up to Hicks to knock them through. He is in no way an exciting name to own, but he will get you around 15 HRs and 60 RBIs. At this point, I will take that over Murphy.

These two guys were once on the same team, making both players useless. Now they are both on seperate teams as Swihart was traded to the D-Backs and the red hot Vasquez will keep the catcher job all season. Vaquez has 3 HRs this month and two of them this week, he is playing very strong great defensive catcher. Vasquez is the guy you want more than the two.

However Swihart who has never had a chance to prove himself as an everyday option should get that opportunity witht he D-Backs. They are very weak at catcher, especially with Avila injured. Carson Kelly is nothing, Swihart is a switch hitter who can play everywhere. The D-Backs already said he will play in the OF/3B and 2B as well as catching. I don’t see a lot of room at those positions, but Blake will get some PT.

The team is strong, I am not worried. We are not even a month through the regular season and there is no reason for anybody to panick. Trust the Process. BEAST DOME STRATEGY will always have you ready to BEAST.