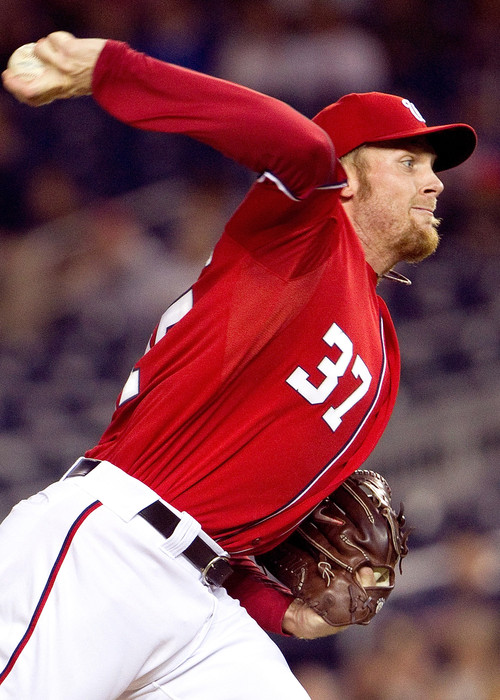 By Muntradamus
Not only is this article a Buy/Sell piece, it also ranks the top 135 pitchers for the rest of the season.  I hope you have been enjoying the new and improved Daily Pitchers Rankings, and on behalf of BEAST TECH we thank you for your patience as we continue to build the site.  Hopefully everything is done by this weekend.

Check out all the other TRADE MARKET Articles:

Feel Free to ask any trade questions at the bottom, and as soon as BEAST DOME NATION chat is up.  I will be sure to let everyone know.

*The numbers next to the players is their ranking which can be found on the bottom.

Strasburg is still pitching at an elite level.  With his INN limit still uncertain, now would be a great time to sell high.  Read all about it in an earlier article I wrote.

Seek Out: Star Hitter (Granderson, Braun, Cano, Pedroia) or any pitcher ranked below him (10-20) on rankings at the bottom of the article.

Lynn-Sanity, no doubt about it Lynn is maybe the best pitcher in the NL right now.  He should be great, and continue to improve but there is something to be afraid of.  Actually three things to be afraid of.  Number one, if the Cardinals decide to go after Roy Oswalt he will most certainly push Lynn to the bullpen so he can preserve his arm.  Number two, once Chris Carpenter returns there is a good chance Lynn moves back to the bullpen, to preserve his arm.  Number three, he is still very young as this is his 2nd year in the MLB, which means he will most certainly be on an INN limit even if he does stay the whole season.

Feliz has been solid with 3 of his first 5 starts being of quality.  His numbers look great so far, but keep in mind he too will be on an INN limit.  Now would be a good time to sell him as he is coming off a 8 K game with 1 ER in 6 INN.  The Rangers are easily the best team in baseball, and now is the time to get all the value you can.

Seek Out: Just an upgrade of a quality position player for a Feliz taker.  Andy Pettite would be a good FA add on the waiver wire to replace him.

*The Numbers next to the players is their ranking which can be found on the bottom.

Holland has not looked consistent so far to start the season.  In 6 starts this season, 3 of them have been to his original elite caliber.  Holland seems like a pitcher who will only get better as the season rolls on, and now is the time to overpay to get him.  The Rangers offense will give him run support, and Holland is the type of pitcher that can rack up the 7 INN, 1 ER, 9 K games.

With Michael Pineda out for the season, and Freddy Garcia just flat out awful.  Nova is guaranteed a start in the Yankee rotation the rest of the season.  So far not only is he hitting his spots when pitching, he somehow has 4 Wins with an ERA at 5.02.  In his 6 starts, 3 of them have been quality.  I expect him to get better as the season continues, and the Yankees will start winning more games.  Tex, A-Rod, and Cano have not even begun to reach their potential.

STARTING PITCHER RANKINGS FOR THE REST OF THE SEASON