If you are a natural at this site, then you have been hearing me roar up Cameron Maybin nearly every year since 2013. SO CALL ME MAYBIN (2013)

What is there not to like about this guy. His Power is not his moneymaker, it is his wheels. The guy is a Stolen Base Machine! 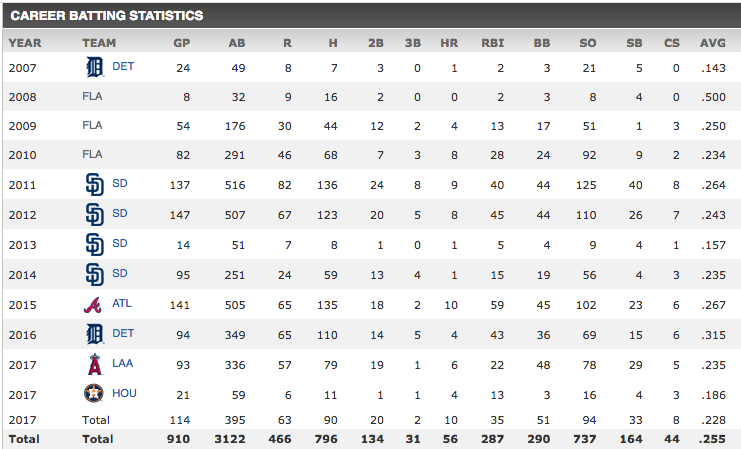 First thing when looking at these numbers is I see a guy who has been good, but not someone that is making me jump out of my seat.

Which is why we are going to take a step deeper and I am going to show you why these numbers are horribly scewed and in fact we have a guy who is going to be 31 Years Old on April 4th, compete with Billy Hamilton for most Stolen Bases in the National League. Sit back, relax and enjoy..

Here is Maybin’s career in a nutshell.

Cameron was touted as a Potential Superstar! So much so, the ‘Florida’ Marlins took him as the centerpiece of the Miguel Cabrera/Dontrelle Willis trade back in 2008. Cameron struggled with the Marlins in his first three seasons seeing more minor league time than major league time. Which forced the Marlins to trade him away to San Diego where he finally broke out stealing 40 Bases in 2011 and then following up 2012 with a slight downgrade in numbers, but still a healthy season.

2013 both knee and wrist surgeries shortened his season.

2014 Maybin was caught for PEDs, probably his only option to becoming the player he once was.

2016 Maybin HBP breaking his wrist during a Spring Training game. Same Injured wrist from 2013. Ended up being a SUPERSTAR hitting .315 and stealing a base in each of his first 4 games back.

2017 Maybin was among the league leaders in SBs at the All-Star Break then sprained his right knee. The Angels traded him away to Houston where he was a part-time player. Never found his rhythm but he was part of a World Series team.

Cameron Maybin signs with the Miami Marlins, the team that took a chance on him 10 years ago. The Marlins never recovered from losing Miguel Cabrera, and Derek Jeter is gutting the team out. Giancarlo Stanton is now with the Yankees, Christian Yelich is with the Brewers, Marcell Ozuna is with the Cardinals. Completely losing their core.

On top of it all, Dee Gordon the SB king is now in Seattle which leaves this team with no true leadoff hitter. Justin Bour/J.T. Realmuto/Starlin Castro make up the core hitting of this squad, and with no true speed option on this team the Marlins decided to ‘Call Me Maybin.’ Cameron Maybin signed a 1 Year/3+ Million contract is the guy who is going to generate all the Marlins offense.

When Cameron Maybin gets on base, it his is responsibility to get to 2nd Base with his wheels. Cameron is definitely capable of Stealing Bases, opportunity at the lead off spot has been limited in his career. The Angels moved Maybin all over the order, the Tigers were set on Ian Kinsler being the leadoff hitter when he was on Detroit, and his days in Atlanta he was mostly batting 2nd. The Fact that Cameron Maybin is going to be hitting lead off is very exciting, especially on a team that needs him to steal bases to generate runs. The Marlins do not have sluggers behind Maybin.

With Cameron Maybin being on a 1 year contract and also being capable of playing all the Outfield positions, Cameron is going to be a SB star who will play the season from start to finish, even when Lewis Brinson and ‘Magnum’ Sierra get called up.

Numbers like that do not grow on trees. Cameron Maybin ECR for the OF position is #117, highest Expert Rank is #80. More likely than not Cameron Maybin will be available just about anywhere during your draft. Get Maybin, don’t worry about speed again.

MUNTRADAMUS SHOW COMING BACK NEXT WEEK