FANTASY BASEBALL: Oh No You Didn’t 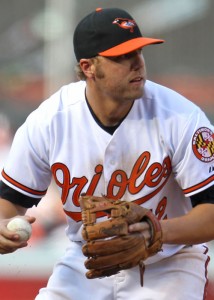 This Article will feature 5 Players that could have been dropped in your league, and you will take advantage and pick them up.

Fantasy baseball is a game patience and trends.  The season is long, and some hitters are hot, while some hitters just get in terrible cold streaks.  The key is to analyze pitching matchups, but most importantly, how hot a hitter it is.
For example this month:

Last Season he had 0 HRs in the month of April.  If that happened to him today he would probably be on Waiver Wires right now.  How did he follow up a 0 HR April month.  By hitting only 1 May HR.  Here we have the most popular player in fantasy baseball today who only had 1 HR through the first two months of the season.

So how did he follow that up?  He hit 15 HRs in the final 4 months of the season.  If he would have continued that pace he would have had about 24 HRs compared to what was only 17.  So you get the point, batters get hot and cold.  The pace Edwin is on is ridiculous, and I do not expect him to hit more than 30.  Right now you could trade him as if he was worth that.  Easily.
*To Talk Fantasy Baseball 24/7 Join the BEAST DOME NATION.  It is all Free!

FIVE PLAYERS YOU SHOULD NOT DROP:

When you think of Adam Lind you think..This guy can hit 30 HRs and drive in 100 RBIs if he puts it all together.  The problem with Lind is it is hard for him to put it all together consistently throughout a season.  But when he gets going, there is no turning back.

Here is why he should not be a FA:
*Last Season

After that point he got injured, but he came back and continued to mash.  Lind has huge power and he should not be a FA, but right now is owned in 75% of Sportsline leagues. This number continues to drop, but it will go straight up once he gets going.

When you think of Mark Reynolds, you remember the days when he was a Fantasy MVP with the Diamondbacks.  44 HRs, 102 RBIs, 24 SBs.  Fantasy numbers from a 3B option do not get much better than that.  Even with the .260 batting average it would still make him the #1 3B option drafted today.  Flash forward two seasons, and Reynolds managed to hit 37 HRs in his first year with the Orioles.  The speed decreased to 6 SBs, and the batting average is now around .222.

Reynolds is averaging over 31 HRs a season in his career, including a 17 spot he hit as a rookie in 111 games.  This guy is still mashing the ball at a high rate.  So why would an owner get impatient with him?

Here is why he should not be a FA:
*Last Season

As you can see Reynolds is  a player who can heat up and just start going.  He typically is a slow-starter, and I would not be worried about his recent struggles.  He was battling an illness for a good part of this month as well.  Mark Reynolds is only owned in 74% of Sportsline leagues, and the number is dropping.

This season Delmon Young was destined for big things.  He was batting 5th behind: Miguel Cabrera, and Prince Fielder.  Also last season Young had 32 RBIs and 8 HRs in 40 Games with Detroit.  How could he not get 30 HRs and 100 RBIs this season.

Well after his slow start, he acted like a fool and got suspended for 7 games.  The Tigers will not discipline him as they know they need his bat for their offense to reach its potential.  So should you be worried about his slow start after his great spring?
Here is why he should not be a FA:
*Last Season

April: 0 HRs
May: 1 HRs
June: 1 HRs
July: 0 HRs
August: 4 HRs
September: 6 HRs
This Spring alone, Delmon Young had 6 HRs.  He was destined for big things, and a slow start should not discourage you.  He will be more focused than ever when he comes back.  Delmon is only owned in 62% of Sportsline leagues and the number is declining quickly with the suspension.

Yes there is some reason to panic when you hear J.P.’s name.  One I cursed him to start the season by ranking him higher than any catcher on Fantasy Pros by a good margin.  Jeff Mathis is outperforming him.  Last but not least, Travis D’Arnaud who is a top catching prospect could possibly make his ways into the bigs if J.P. keep struggling.

So how did a majority of the fantasy baseball world take all this in you ask?  They simply cut him.  His ownership has dropped from 84% to 62%, and that number may be on the decline.  But it is still J.P. Arencibia.

Here is why he should not be a FA:

If you have the opportunity to snag J.P. for someone like Russell Martin, you are not risking anything at all.  Arencibia should find his power stroke soon, and by then he will be snatched off the waiver wires quickly.

Wow, 0 HRs for a player a lot of people were unsure about will not help his value.  But here is what will, 6 HRs this Spring.  That may not sound impressive at all now that the first month is over and he is still at 0, but there are some positive signs for Rayburn.

1. They got rid of Brandon Inge.

That is the only positive sign which means there should be everyday PT moving forward.  He will have to earn it, but only Ramon Santiago is the only one standing in his way.  Santiago is no threat in the fantasy baseball world.  Raburn is typically a 2nd Half hitter and here is evidence to show that.

Here is why he should not be a FA:

As you can see, historically Ryan Raburn is a slow starter.  In that season where he hit 9 HRs in April through July, it included a May where he had 0 HRs.  I would not give up on Raburn this season as this is the first time he has a chance to play 140 Games easily this season.   In this Tigers lineup he should explode.  Keep him around, or add him as his ownership has gone from 60% to 28%.