Still in my journey mode for NBA as I go for $100K and a Qualifier. While that is going on, MLB is right around the corner. Not only do I have to defend my 4x HR Champion pick on FantasyPros, but I want to steer you in the right direction to win your Fantasy League.

A strategy you MUST-TAKE in Fantasy Baseball this season with the 1B position, is to avoid it until at least the mid rounds of your draft, where Chris Davis will fall. More on him later. The 1B I will be promoting all off season will be Chris Carter who signed a 1 year deal with the Yankees. 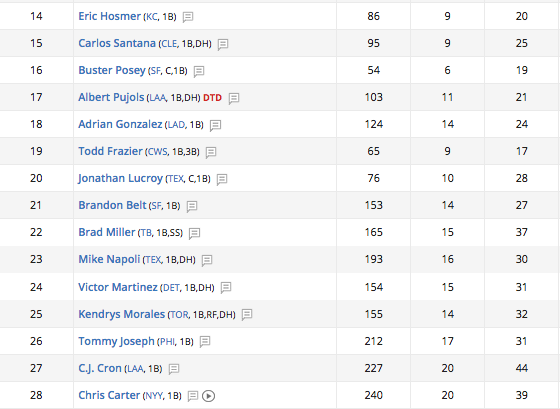 Chris Carter is not even in the Top 20 on FantasyPros 1B, but I guarantee you he will be fighting till the end to be the HR Champion. Right now there is not a direct path for Carter to be an everyday player, but he will find his way. It is a long season. Jacoby Ellsbury and Brett Gardner do not defy health, and Greg Bird has also yet to prove he is the real deal. The Yankees know that if they use the reigning Co-HR Champion in the NL Last year (tied with Arenado who played in Colorado) that he will definitely lead the team in Home Runs this season.

Want an even more impressive stat.

Chris Carter has played in the AL West with Oakland and Houston. 3x during the course of his career, he traveled to Yankee Stadium for a series. In every single one of those series, he hit at least 1 HR. He knows the Ball Park, He has the Thunder Stick, and the rest of the AL East is a HR Paradise.

Chris Carter is one of many 1B you can target late on draft day. However he has a legit shot of leading the Major Leagues in Home Runs. The 1 Year Deal will make sure he is not slouching as he is playing in the bright lights of Yankee Stadium with everyone watching.