There are few players in the Fantasy Baseball world who can dominate the SB category like the old days. The Michael Bourn times are done, the Juan Pierre days are done, the Kenny Lofton days are really done. If you notice all three of those players have one thing in common. They are all OF only options in Fantasy Baseball. Now what if I told you there was a player who will qualify at 2B/3B/OF and will dominate the SB category. You will be screaming EMILIO! all season long.

What makes Emilio Bonifacio so special is his ability to rack up multiple SBs every game. He has perfected the art of the SB and unless you make a perfect throw when Emilio is running, you probably have at best a 27% chance of throwing him out. His speed is lights out. Here is a sample size of Emilio to how he started 2014. 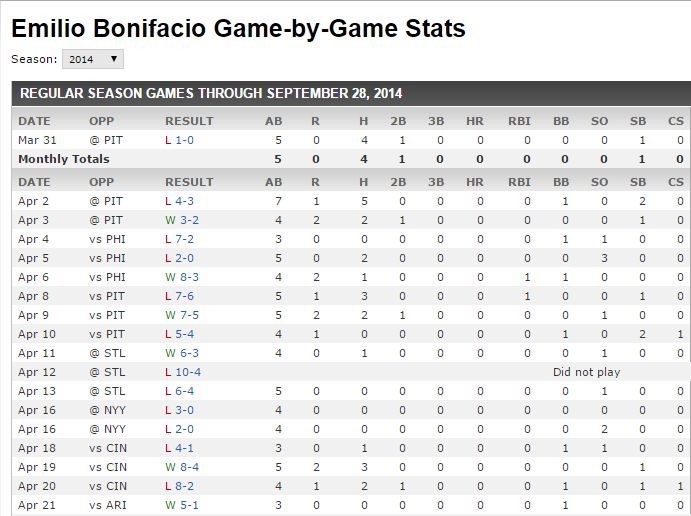 Eventually Bonifacio went on the DL with an Oblique Injury (just like Chris Davis) and switched teams to a bench role with the Braves. Regardless of all the drama, Bonifacio ended up with 26 SB in 110 games. A lot of those games he only apperead as a pinch hitter.

Only one time Emilio Bonifacio played over 150 games (2011). He stole 40 bases in that season, which is not nearly as impressive as his 30 SB in 64 games in 2012. The sky is the limit, and the White Sox will need Emilio to steal bases as he can bring a jolt of lightning to maybe the slowest team in the American League.

While you may be worried about Bonifacio hitting 2nd, it could actually work to his advantage. If Adam Eaton stays the .240-.260 hitter we all know he is, more likely than not Emilio will be coming to bat with 1 out. If Emilio gets on base for the BEAST hitters in Mekly Cabrera and Jose Abreu, the pitcher will not be able to put enough focus in slowing down Bonifacio’s speed as the pitcher cannot afford to make a mistake pitch.

If Emilio plays a full season as the #2 hitter for the White Sox, it is not ridiculous to expect a season in this range.

With an ADP of 333, you can comfortably take Bonifacio after Round 10 and have a HUGE difference maker at the 2B spot. If you are following my advice so far this preseason. Your Fantasy team will so far look like this.