Get Crunk Off Of Pineda Coladas (Michael Pineda)

It was a tradition every time I was at the Sportsbook.

If Michael Pineda was on the mound, I would order a Pina Colada. If he was pitching like a BEAST, I would order more Coladas than I can count. When I realized the amount of sugar I was consuming, I decided this tradition may be over. Through all of these life decisions I did learn one thing.

Hide your Wife. Hide your Kids. Draft Michael Pineda in all leagues this season as the superstar 26 year old is finally ready for his primed breakout season that last 30+ Starts.

When Michael Pineda is on the mound, the entire world stands still as we witness a true BEAST on the mound standing at 6’7-260. When Pineda throws his cut fastballs that move from the batters hand to the corner of the strike zone at 97 mph, you cannot help but say, “Thank you Muntradamus for having me draft him.” Last season I had everyone on Michael Pineda hard and early.

There is no reason not to draft Michael Pineda as a Clear Cut #3 Starter for your fantasy team. He strikes out batters at an alarming rate and if you take away an embarrassing Pine Tar Incident as well as a long stint on the DL with a torn labrum. You easily have a potential CY Young candidate in the AL. The fact that Pineda was able to come off the DL and remain as dominant as ever proves that Michael Pineda will not skip a BEAT in 2015. 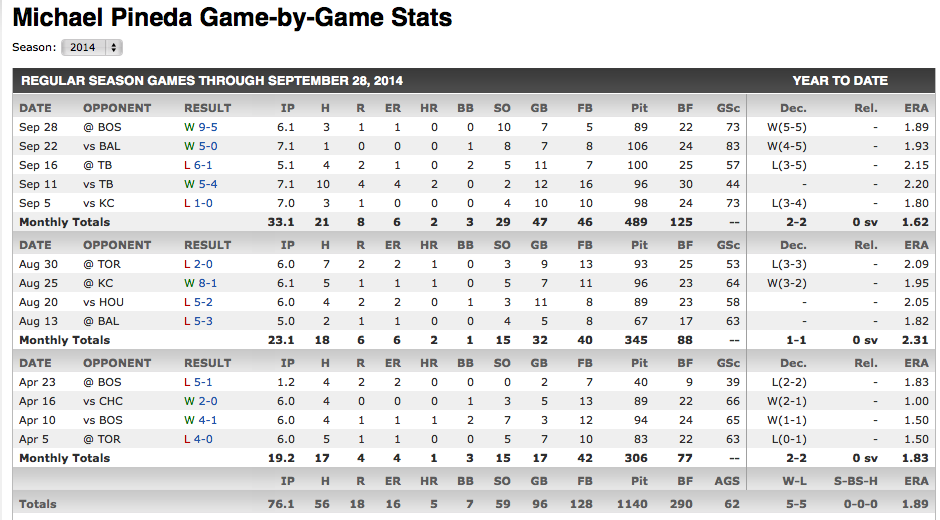 The Pine tar incident happened on April 23rd. If you study the 2014 of Pineda, you see a poor mans Clayton Kershaw. Pineda only had 1 bad start which was on September 11th (R.I.P) against Tampa Bay. The fact Pineda was able to bounce back in the next start against Tampa 5 days later with 5K/1 ER/5 INN performance shows how dominant he really is.

The best part about Pineda is looking at his last three starts. 19 INN/2 ER/23K which includes 18Ks over the last two games. Pineda was straight out BEAST like as he owned a WHIP at 0.57.

It does not matter that Michael Pineda pitches in Yankee Stadium, Michael Pineda is simply Roger Clemens and Randy Johnson in one. The Strikeout rate may have not been great for Pineda in 2014 as he recorded 59 in 76 INN, but trust me those K numbers will rise in 2015 as he is not hittable when he is on. 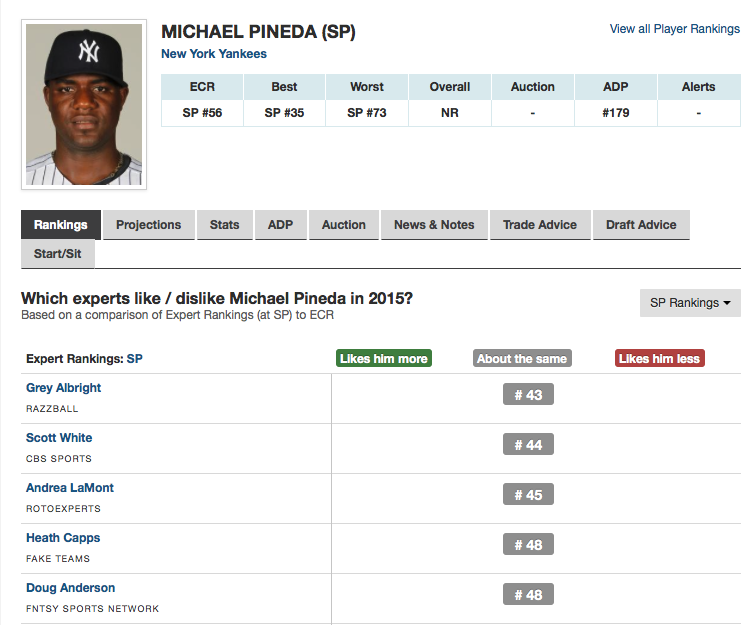 Michael Pineda is MUST-OWN in all leagues this season. Experts have Pineda at highest in the mid-40s compared to all starting pitchers which is hilarious. Go ahead and target him after the Top 25 pitchers go in your draft on draft day.