BEAST IN THE OUTFIELD (DESMOND JENNINGS)

Once again the Fantasy Experts of the Industry are downplaying one of the most underrated superstars that never panned out. While you made read that sentence twice, simply Fantasy Experts are giving up hope on the 28 year old Desmond Jennings. His best season was a 13 HR/31 SB season a few seasons ago, injuries and inconsistency has been his downfall as he has yet to play a full 162 games. In fact he has never played over 140. With the Rays looking worst than ever and Jennings coming off a career low 15 SBs, you are going to ask me.

Why should we all of a sudden jump on the DESMOND JENNINGS bandwagon?

There are few players in todays baseball that can put up Kenny Lofton type of numbers. 12+ HR/30+ SB at the bottom floor. Jacoby Ellsbury/Mike Trout/Carlos Gomez should all clear those numbers. The next potential group is Yasiel Puig /Adam Jones.

All of those players are Must-Own. Must-Draft. Must get on your Fantasy Team. In reality, you will likely end up with only one or two of them as they will all be gone before the 3rd round.

Now what if there was a player who FantasyPros Experts Rank #69 in the OF position and has an ADP of 294 who can easily join this club. 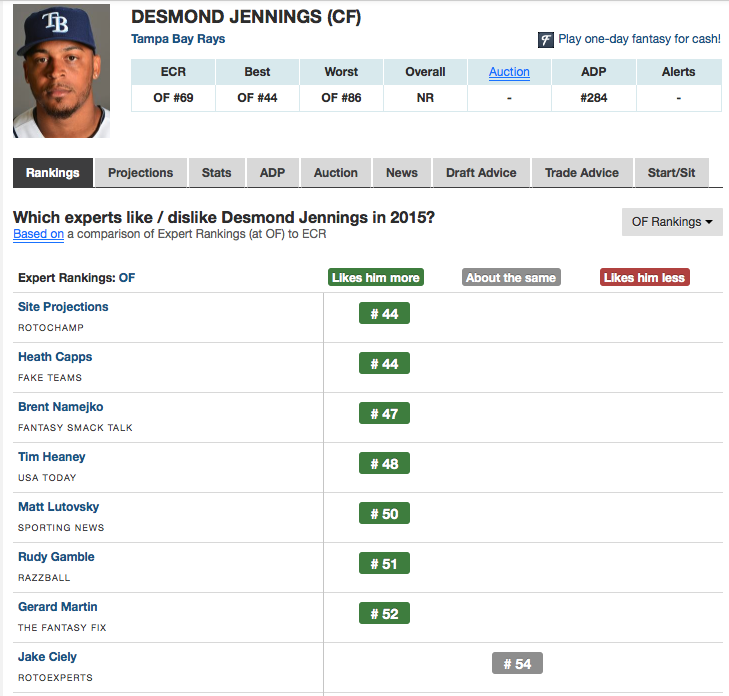 For experts to write off Desmond Jennings once again proves that the other Fantasy Experts in the Industry cannot spot talent when it is right in front of their eyes. I am willing to put my reputation on the line with Desmond Jennings as a True Superstar Fantasy OF option who will easily be a Top 15 option when the 2015 season comes to an end.

The Rays offense is garbage this year. They lost Ben Zobrist to Oakland, they lost Wil Myers to San Diego. What is left is Evan Longoria/Desmond Jennings and a bunch of scrubs. With the Rays lacking so much hitting this season, it is vital that Desmond Jennings gets in scoring position every time he is on base. He may bat 2nd, which will lead to a lot of runs and SBs as pitchers really have to worry about making a mistake pitch to Evan Longoria. He may bat 5th, where he will have a lot of RBI opportunities batting behind the big bats of team, then he will have to rack up the SBs as the Rays back of order have zero chance of scoring runs without him crossing the plate.

Desmond Jennings is going to have to be the Rays MVP. Evan Longoria and his Solo HRs will only take the Rays so far. It is up to Desmond Jennings to get on base at a consistent rate, and steal bases whenever the opportunity is there. Carl Crawford used to steal 50 bases at ease for the Rays back in their garbage days, and with the AL East Ballparks all being Hitters Parks, Desmond Jennings will remind us of a vintage Carl Crawford.