This is the last you will hear of Muntragate.  Starting Monday, BEAST DOME will resume with it’s regular Fantasy Football content.

A VIP Client was really pushing for me to push to make a big statement on CBS taking my Rankings. Obviously this was a case of someone not understanding that if he puts his custom Rankings into the system, CBS will update it’s own Custom Rankings to reflect. 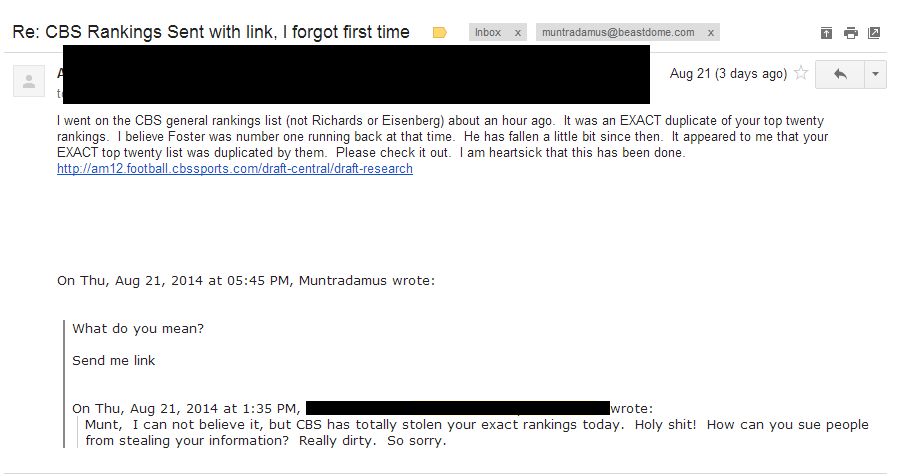 I did not suggest once that Jamey or Dave changed their Rankings based off of mine.  The article did suggest there was a potential 3rd Party Company adjusting inner-league rankings.  Especially when the RB Rankings below duplicated the Rankings from Muntradamus.NET.  Not only the RB Rankings.  The QB/WR/TE/DEF Rankings all reflected the Muntradamus.NET Rankings on the CBS Platform. 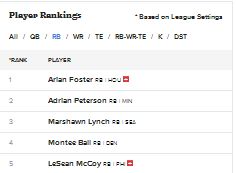 I do not own a CBS Fantasy Football League account so I was not able to gain access to the section he was showing me.  The VIP Client continued to send me screenshots that reflected the Muntradamus.NET rankings for all positions.

During the BEASTcast TV – BEAST DRAFT SPECIAL that went all day Saturday.  The BEAST VIPS made the VIP Client realize he himself did put those Rankings in, and it had nothing to do with CBS.

I am sorry Jamey and Dave that this blew up the way it did.  If anything the BEAST DOME NATION is all aware of who you two are. I wish you both the best for this upcoming Fantasy Football season on FantasyPros.

Before I Leave you all today I wanted to say this.

I love the energy and passion that came today from the BEAST DOME NATION.  I appreciate the loyalty you all have shown throughout the years of BEAST DOME and it’s Journey to the Top.  I am sorry we had a moment like this, luckily it is only the preseason and all will be forgotten. Similarly to gameday Sundays on the gridiron, I will let my performance in the FantasyPros Expert Rankings do my talking for me.