We are now a little more than 1/2 way through the Fantasy Football season. Time to look at all my Preseason Picks. This entire Week is dedicated to Reflection, along with advice to close out your season for the Championship.

Going into this season, my package for Fantasy Advice throughout the entire Preseason was $100. Included Daily Content/BEASTcast TV Episodes/In-Depth Draft Strategy and Player analysis, along with stat predictions for every player.

While TEAM BEAST DOME in NFFC is not sitting pretty, that draft in no way reflects the success of the clients who purchased the package.

Below are the results up to date of my Preseason Picks, along with a few VIP teams.

*Only Top 20 Count in FantasyPros Land* 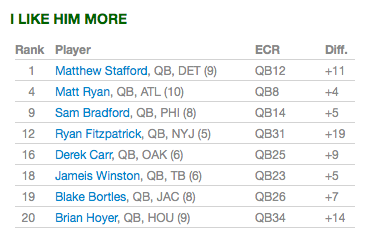 Obviously Matt Stafford has not been the QB we expected. The early tough road schedule got to him, and now his team forgot how to block. We have seen his Tom Brady like potential for 5 straight quarters Week 6-Week 7, then the Lions forgot how to block again. Matt Ryan has been solid, could be better. Same can be said about Bradford, but with a little less truth.

Fitzmagic/Carr/Bortles/Hoyer have all been clutch and killing their spots. Carr and Bortles will both be Top 10 QBs everywhere next season. Likely inductions into the BEAST DOME Hall of Fame if they exceed their first half pace.

Russell Wilson and Tony Romo easy Bust of the year picks. You can say, oh they got injured. But if we are playing that card then all my picks last season were flawless. And we know how much the trolls like to play with those players. Cam Newton I have been wrong about, he has been impressive with no WR core outside of Greg Olsen at TE.

Not a great start to the QB season for everyone on BEAST DOME, but not a horrible one either. The backup QB game has been on point, which is good insurance for when your star in Stafford had tough must-bench matchups against Denver and Seattle. All-in-All. C+ with room to grow into an A if Stafford reaches his potential in the 2nd half. At the very least you did not drop a high pick on him. 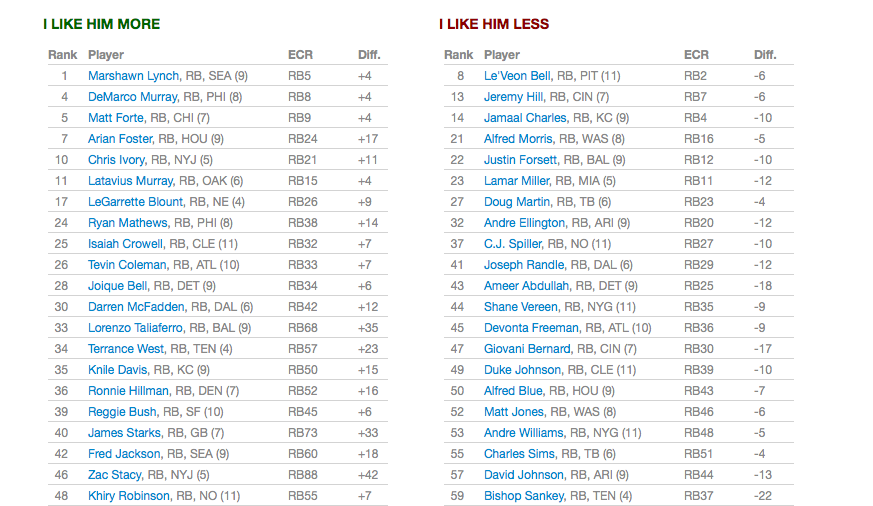 Chris Ivory is easily the BEAST pick of RB for the year. He has been high on my list since the June Rankings. Touchdowns have been saving him lately, but nobody is counting how he gets his points. LeGarrette Blount is home free going to be right there next to Ivory as one of the BEAST picks of the season. Ronnie Hillman and James Starks have both been exceptional.

Marshawn Lynch has survived the 1st Round RB Bust List and looks healthy/prime for a big 2nd half. Eddie Lacy/CJ Anderson are locked in time shares. Jamaal Charles and Le’Veon Bell are both done for the year. DeMarco Murray and Matt Forte are the only 1st Round RBs besides Adrian Peterson who are Top 10 at the position this year, both who were on my list.

Darren McFadden above Joseph Randle is going to be the most underrated pick of the year.

Terrance West/Lorenzo T./Knile Davis will all hurt me. Preseason Stars that never got the chance they deserved when the games actually counted.

Devonta Freeman was a big miss. However nearly every expert, over 95%, had Tevin Coleman ahead of Devonta Freeman. Freeman has looked like a completely different player from his rookie season, nobody had Freeman ranked below #25 to begin with and expected this.

Lamar Miller and Justin Forsett are bouncing back after slow starts. Giovani Bernard is looking good in a limited role, we will call it even with the Jeremy Hill pick who has ruined teams with their 2nd round pick. Speaking of ruined seasons, Le’Veon Bell/Jamaal Charles. Ameer Abdullah and Joseph Randle are now done as well. Good Bye 1st Round Picks and 5th Round Picks.

I am the only expert who at this point selected out the BEAST RBs to take in the 1st Round (Lynch.Murray.Forte). I have the sleeper BEAST RBs of the season with Ivory and Blount. Most important of all, I avoided all the landmine RBs who would have ruined your season. With a big 2nd half from Marshawn Lynch, no expert can compete with these preseason Results. You can talk to every VIP, and none of them are struggling at the RB position. In-Fact, they probably own all the depth. 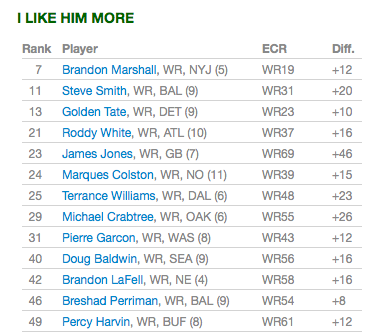 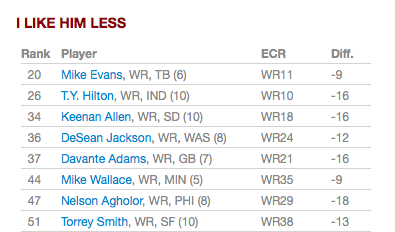 Brandon Marshall is easily one of the BEAST picks of the year. On every BEAST DOME team, he has been unguardable like I said all preseason. SSS was doing great before the injury, Marques Colston/Terrance Williams/Roddy White, all heading towards the bottom.

Michael Crabtree and James Jones have been BEAST picks, and it was my selection of Russell Wilson during my draft which prevented me from getting either one of these guys hoping they would both come back. Neither did. Golden Tate has big upside for a big 2nd half, #13 WR is not possible though.

Brandon Marshall and SSS would have been enough with a sleeper WR. I did however set up a few land mines during the draft if you happened to get Roddy/Colston or T-Will. Which I stepped on myself.

I avoided all the land mines out there, stepped on a few I created.

Marshall is really carrying everyone and if you have James Jones or Crabtree, many VIPs have both. Then you have enough at WR to carry you. LaFell is going up the list quickly.

Great sleeper picks with ASJ/Clay/Watson/Ebron. Top of that list not so great, Vernon Davis has potential to turn his season around, as does JT. Rudolph is Waiver Wire player thanks to Diggs.

Big miss on Eifert but my picks on Kelce/Daniels/Ertz/Allen sort of make up for it. This season all VIPs have been leaning on Silence of the Graham, which is as scary as it sounds. Hopefully the Bye Week wakes up the Seattle play calling. Because of the emphasis on Graham with the draft strategy.

QB/K. Has not been a great season for it, still time for it to turn around.

Broncos/Texans/Saints. Many VIPs got the Broncos, but some managed to get the Saints or Texans if they slipped.

All VIPs should have a strong RB core left, maybe strongest in the league, with a decent amount of WRs led by Brandon Marshall. Everyone is leaning on Jimmy Graham to bounce back in a big way, same can be said about Stafford. The good news about Stafford is you have a quality backup who can put up Peyton Manning numbers every week. If Stafford gets his game together, with the QB/K combo of Prater, along with Marshawn Lynch & Jimmy Graham.

Despite losing Arian Foster and SSS, a Championship is more than in sight.

While I give myself a B.

I dare you to find better Preseason Advice from another Fantasy Site. John Paulsen was all about Russell Wilson ranking him #3 at QB, along with forgetting about Ivory and Brandon Marshall promoting Jamaal Charles and Davante Adams who he both ranked higher than our two stars above. You will also find I am the only Expert who does not have the same rankings as every other expert. 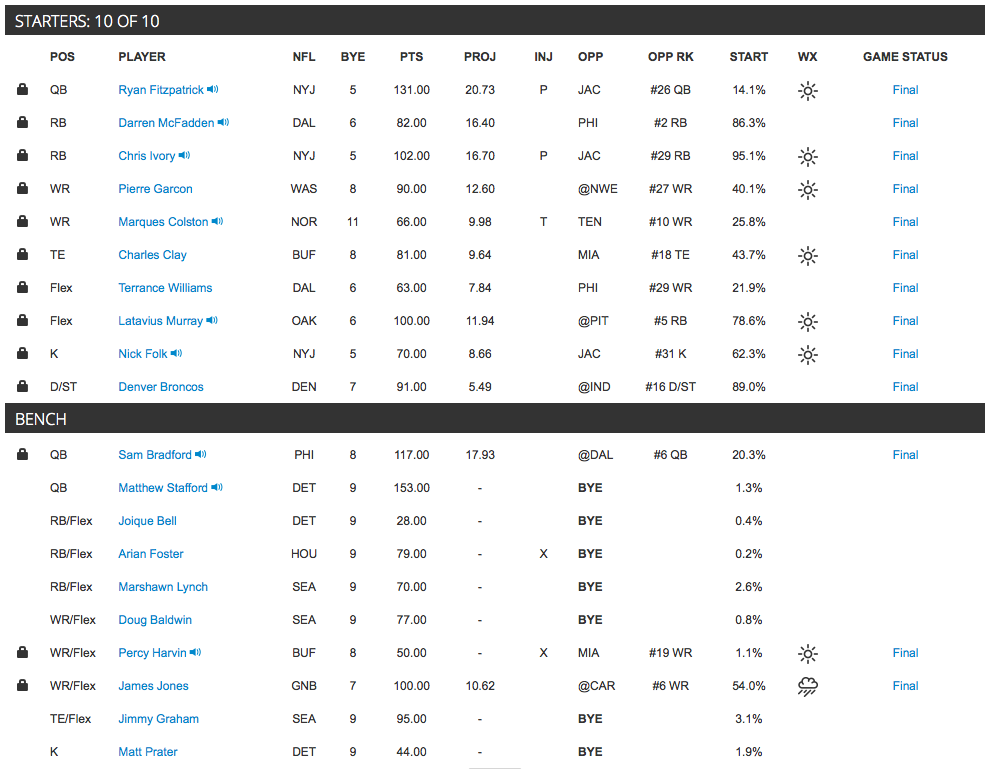 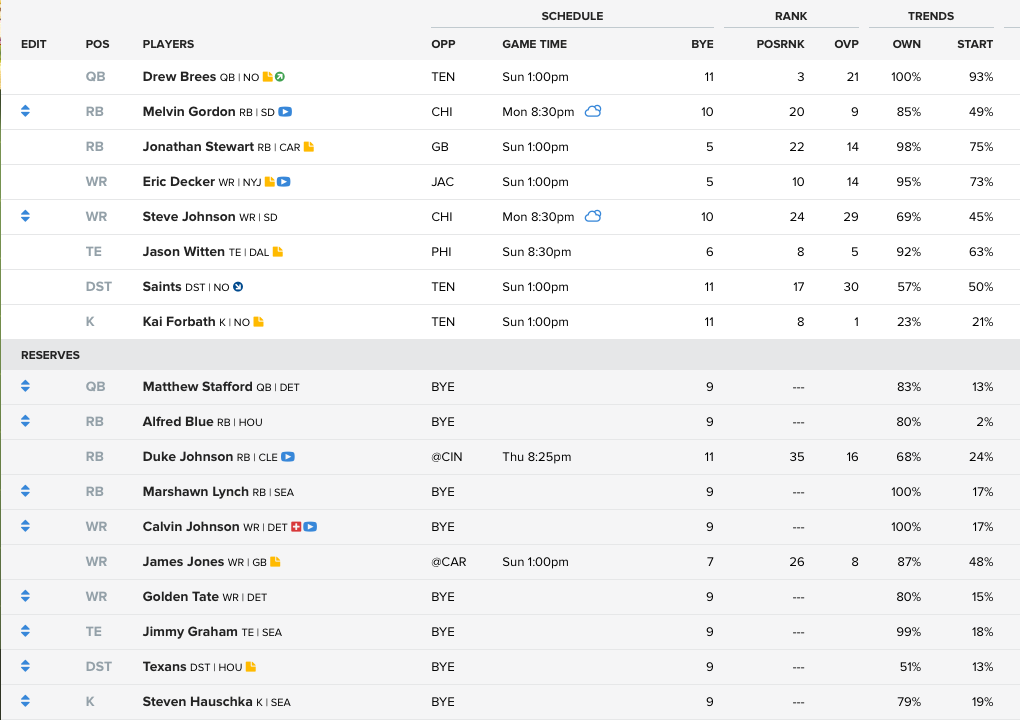 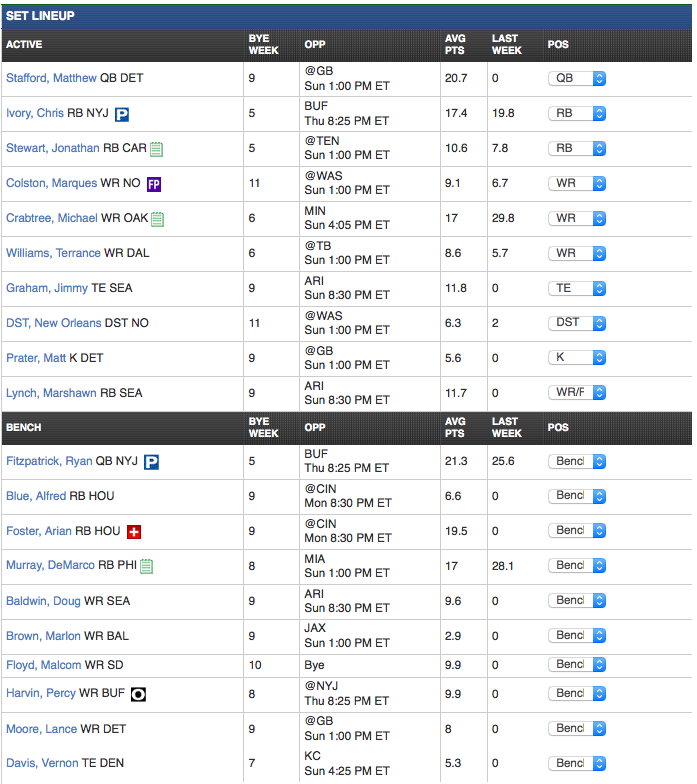 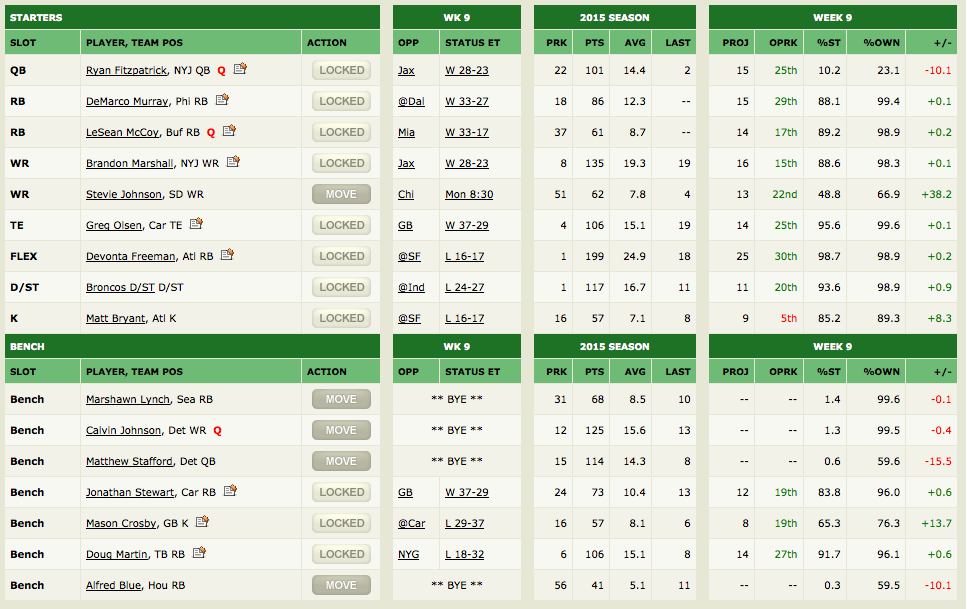 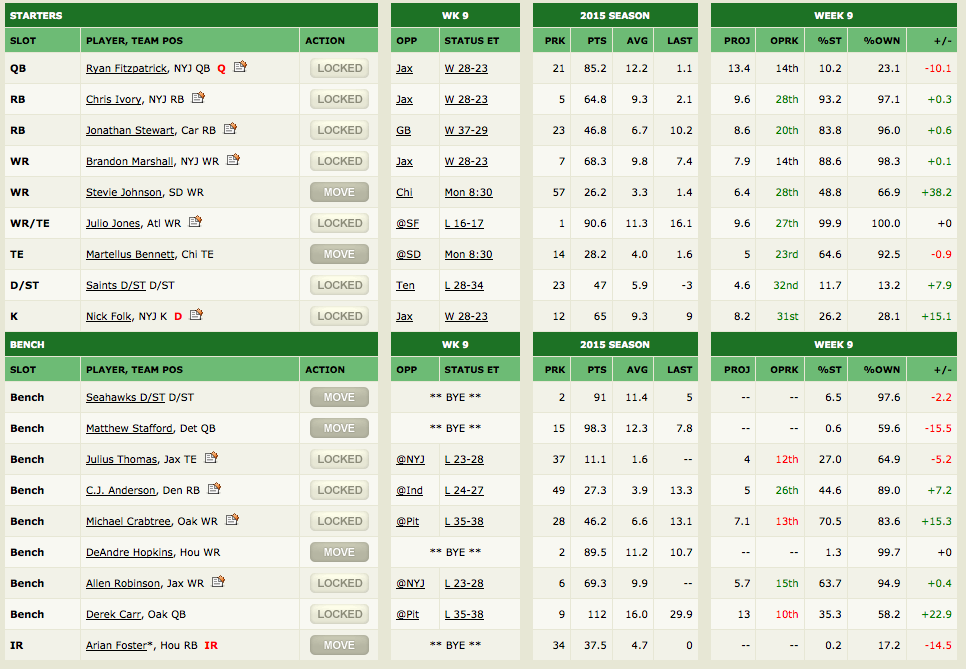 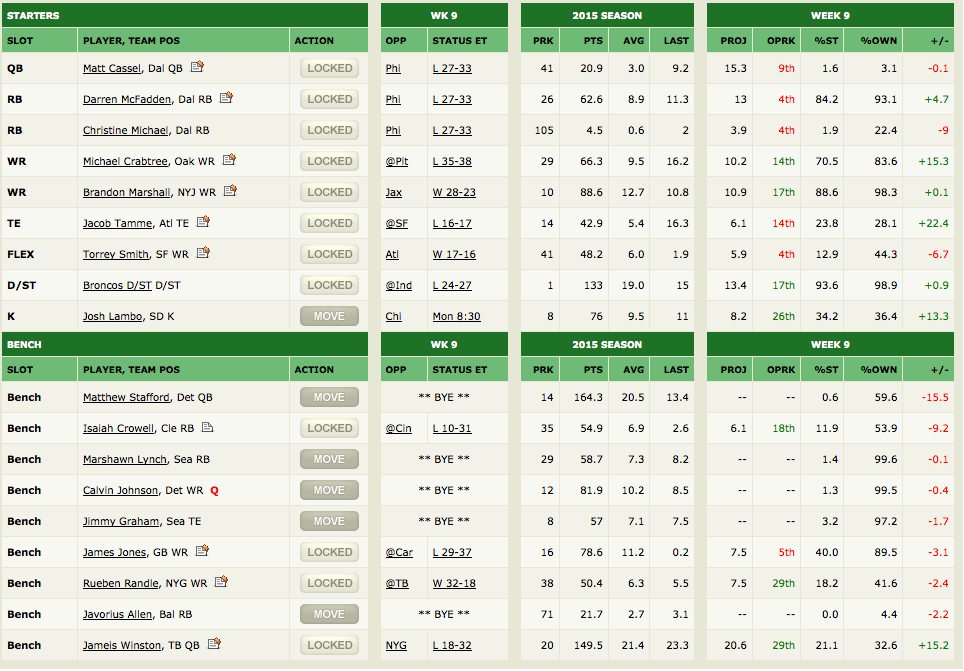