This season we will be tracking TEAM BEAST DOME as it competes for its chance for $100K.  The players on this team were developed and created by the Muntradamus.NET strategy and many VIPs have the exact same team and players.  In fact every single VIP has at least 10 players from this team. 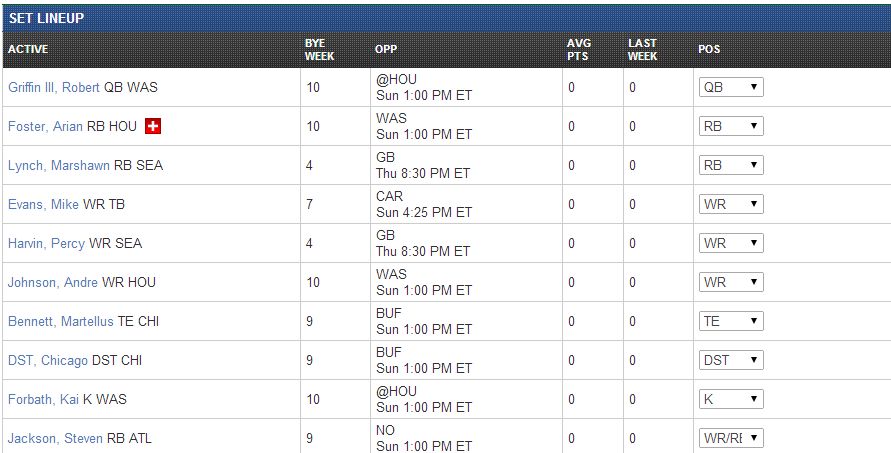 There is Team Edward.  There is Team Jacob.  As a group of BEASTS, we all fall in the same boat as Team BEAST DOME.  Many of you have similar players to this team above, in fact I guarantee you all have at least three of the players above.  Here is how I got this team.

It was Friday Night.  Yahoo just published more hate articles on RGIII and Arian Foster earlier in the day, I knew it was my time to strike.  I sent an E-mail to my friends at NFFC for a Team, and my wish was granted for the Rotowire Championship.

With the 9th pick in the First Round, I grabbed Arian Foster.  I patiently waited for the Snake to come around only to find Marshawn Lynch falling in my lap.  Players like Jordy Nelson and Julio Jones went in front of Lynch, could not believe it.

In the 3rd Round I just missed out on Doug Martin, settled with Andre Johnson who pairs up beauitfully with Arian Foster.  As I waited for the draft to come back to me, I was hoping Vincent Jackson would fall.  He went one pick ahead of me, so I settled with Lamborghini Percy who pairs up nicely with Marshawn Lynch.  Just like that my base has been created.

In the 5th Round I knew I had to grab RB depth, Ray Rice and his 2012 potential looked too sexy to pass up.  He is the better RB by far this preseason in Baltimore, and the concussion to Pierce will change the goal line stand in Baltimore for Rice 70/30, at least. In the 6th Round I reached a bit for Steven Jackson considering how far low he was on the list, at the same time I cannot pass up his potential in the Falcons offense.  For all the haters that think S-Jax is done, you are not giving him a fair chance.  This is a guy who the Falcons paid tons of money for and he was less than 100% as soon as he hurt his groin in week 2, then Julio Jones went down which changed the entire dynamic of this team.

The fact S-Jax became a TD machine at the end and now Julio Jones is back along with this quote from S-Jax. “I want to give the Falcons Fans what they were expecting in 2013.”  I’m all in on S-Jax having a big season, JacQuizz is the #2, and Devonta is the #3.  Both JacQuizz and Devonta are small change of pace RBs.  S-Jax is a 3 down back.

In the 7th Round, RGIII fell to me.  I was nervous he wouldn’t, but the Yahoo/Espn/CBS culture really has all the goats doing what they say.  In the 7th Round, Carlos Hyde was drafted by another team.  It hurt, but at the same time I am fine with my 4 RBs.

After this, I went on a WR spree and ended up with a solid cast of players who can rotate in my WR#3 slot along with my Flex if needed.  100% confident in my WR core, just missed out on Jeremy Maclin by a few Picks which would of been an automatic $100K.  Regardless, I am happy with my unit.  Richard Rodgers went in Round 10, which is too early for my blood.  Steve Smith went very early as well, I decided to draft Boykin ahead because of his potential with Aaron Rodgers.  I settled with Martellus Bennett in the 14th Round.  Shonn Greene was a steal in the 15th Round.  QB/K at the end was icing on the cake.  Kai Forbath is owned in only 1% of Yahoo Leagues.  That 1% is probably all of the VIPs.

This is how Championships are built.

After this draft, I decided to find the 2nd strongest team in the league after everyone was trash talking in the draft room.  People saying my team was garbage was laughable.  I heard lines such as, “Look at my WRs Bro.”  From this team. 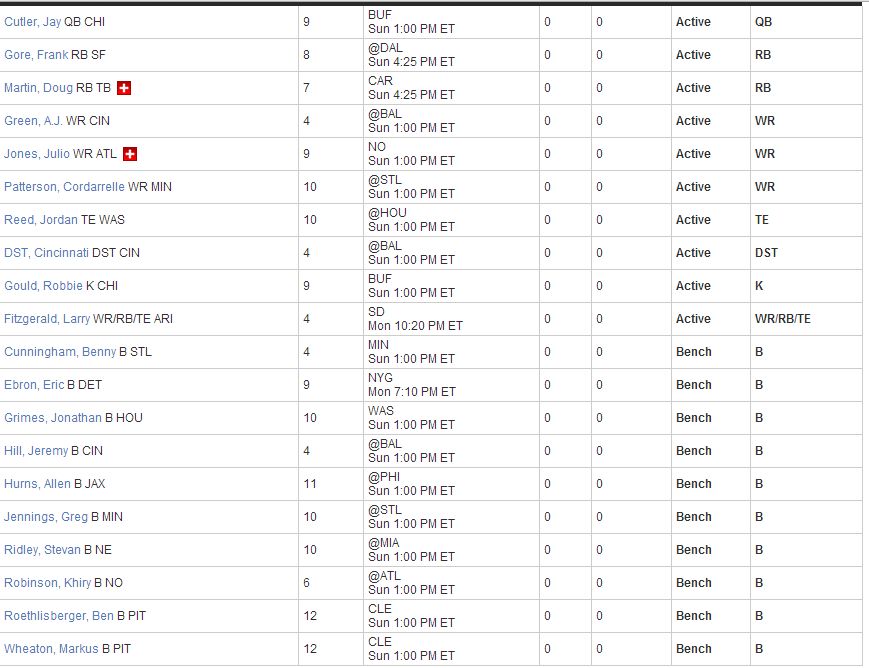 Instantly I started laughing at his team pointing out he will have no RB #2 by Week 5 once Hyde takes over for Gore.  I pointed out my backup QBs can do better than Cutler any given Sunday.  I pointed out he has easily has one of the weakest benches in Fantasy Football History.

“Arian and Marshawn Lynch are both over the hill.”

That’s when you know its not even worth your time to talk back as this guy clearly just reads what ESPN/CBS/Yahoo tell them.  I will happily take his money.

The 2nd place team goes to. 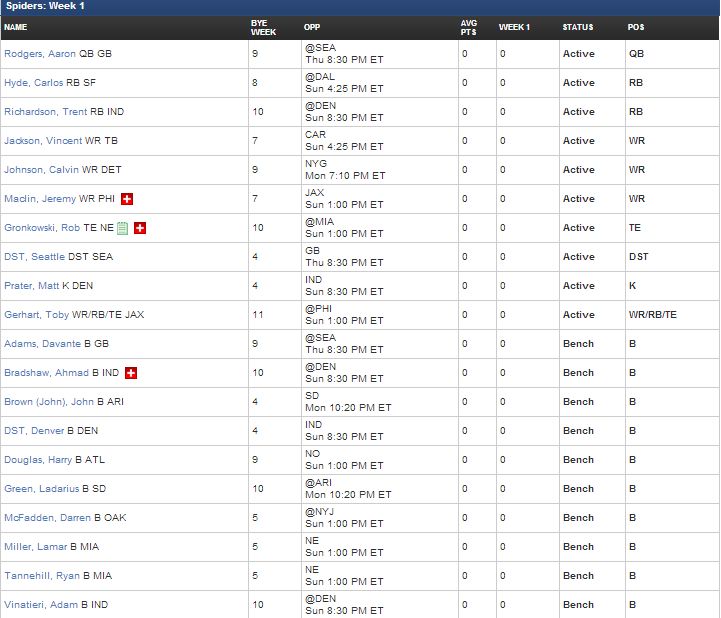 Don’t get me wrong.  I would take my team 100x over this team any day.  My RBs blow his out of the water as he lacks a true Top 10 RB at the moment.  He also hs a huge injury risk in Gronk who can make or break his team.

Regardless this guy took three of the picks I was looking for.  From Carlos Hyde to Jeremy Maclin to Vincent Jackson.  It does not help me he has Megatron and Aaron Rodgers as those guys can take over on Any Given Sunday.  It also helps that his RB depth is not strong as a lot of it depends on injury.  Also helps that he has Toby Gerhart on his team who is easily the BUST of the SEASON.

Like I have been telling all of you this preseason.

RBs Do Not Grow On The Waiver Wire.

Every Sunday there is at least 1 WR on your waiver wire who will have 80 Yards/TD.  Probably more than 5.  To find that on the waiver wire for the RB spot is extremely rare.  There will probably be 5 RBs to jump on total this season off the wire.