FANTASY NBA BEAST OF THE NIGHT

Rough opening night of this new BEAST DOME series as Erik Spoelstra pulled a horrible coaching move and benched Hassan Whiteside for nearly the entire 1st half. He had trouble with Al Jefferson early, so they pulled him. Instead of putting him back in the game with Al Jefferson resting, Erik left his future star center on the bench.

Whiteside picked up a quick 5 rebounds to start the 2nd half for a glimmer of hope. With 5 minutes to go and Hassan at 6 Rebounds, Erik benched Whiteside for the rest of the game leaving him 5 Rebounds short of what could have been.

On the other hand Chris Bosh had 6 Rebounds in the 1st half, leaving him with only need 1 in the 2nd half to easily cover. Finished with double digits taking all the boards away from Whiteside on the end while he sat on the bench.

Tonight the action follows Al Jefferson and the Charlotte Hornets to Atlanta where they go up against the Hawks who dominated the Knicks last night. Game was closer than it needed to be, but the Hawks took care of business in New York.

After losing their home opener to the Pistons, look for Al Horford and Paul Millsap do what they can to battle for a win against the Hornets. Al Horford matches up very well to Al Jefferson, which will avoid the Hassan Whiteside problem of riding the bench. Al Jefferson like Horford is more muscle, than lanky jump out of the gym ability.

With Kyle Korver missing this game, you can expect Millsap and Horford to play more minutes tonight as they need both of their offensive games. Tiago Splitter will also play a lot of Center which at times will move Millsap to the SF where he will have a good matchup with PJ Hariston. Easy rebounds all game as he does not even have to guard his man which will allow him to crash the paint.

Last night the Player Prop was 8 for each of these BEASTS. 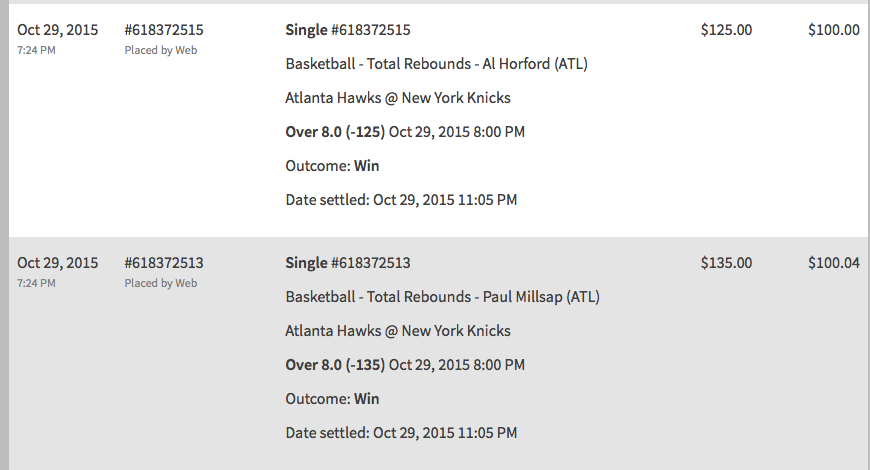 Tonight it is 8 again. 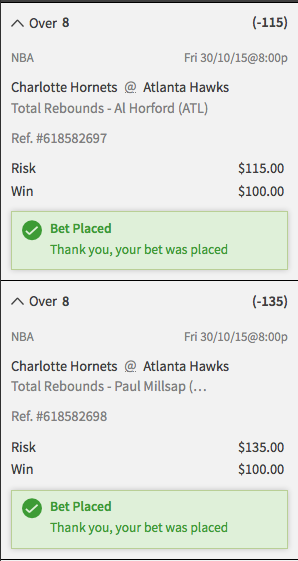 Ride the Crash Brothers for an easy win as both should get double digit rebounds.