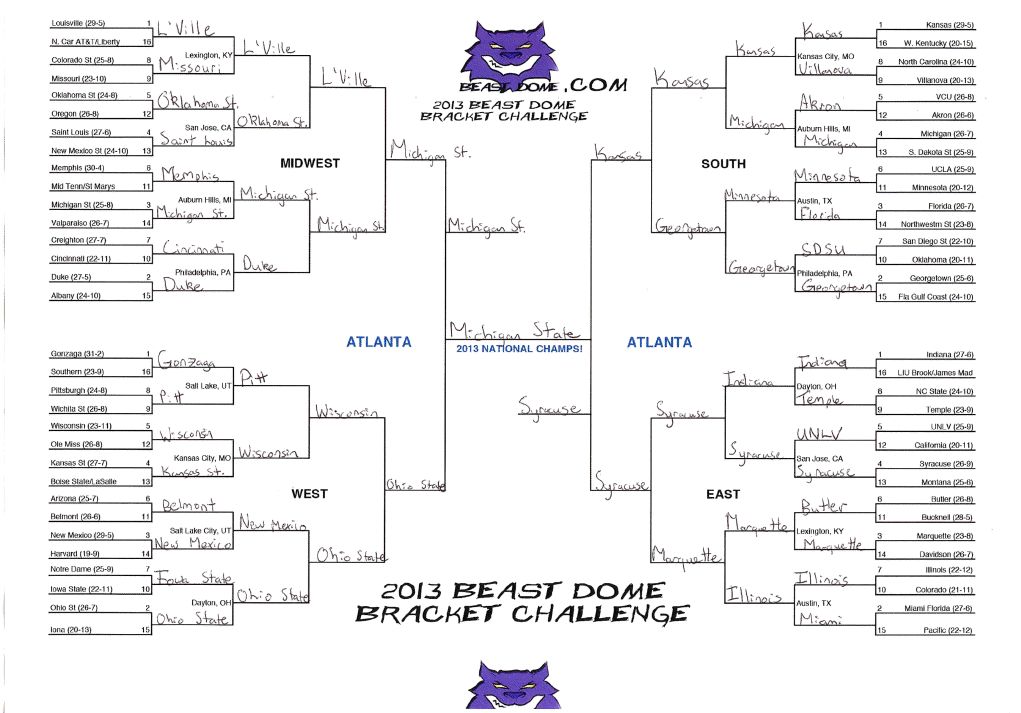 When looking at the 16 match-ups on day one, I would go with one hard-and-fast rule above all else. Stay away from the top-ranked games with top, second and even to a lesser extent, the third seeds. Sure, you cannot go wrong with Russ Smith or Peyton Siva of Louisville or Kelly Olynyk of Gonzaga, but the first games of the NCAA tournament for top seeds introduce numerous wildcards. Coaches must balance playing time for players but also resting for the short turn-around for the weekend. It is also ample opportunity for role players to step up. I would avoid Gonzaga-Southern and Louisville-North Carolina A&T.

In the south, look for 7-footer Zeke Marshall of Akron. He averages 13 points and almost four blocks a game. He could give VCU all they can handle.  In Michigan-South Dakota State, Michigan has this great player Trey Burke. You may have heard of him. But watch out for SDSU’s Nate Wolters. Wolters is the first player with consecutive seasons of 20 points scored, five assists and five rebounds. He also scored a NCAA Division I-best 53 points in a game Feb. 7.

In the Midwest, you can have quite the tournament by picking anyone of Colorado State or Missouri. Both teams like to score and score in bunches. Missouri has an amazing six different players averaging double-digit scoring. Go with the experienced Alex Oriakhi with 11 points and 8.6 rebounds per game. Go for the grind ‘em-out rebounders over guard play as officials tend to let the players bang. You cannot go wrong with Dwayne Evans of Saint Louis (13.7 points, 7.7 rebounds) or Ryan Broekhoff of Valparaiso (15.9 points, 7.3 rebounds).

In the west, I feel you can get the most action from the 8-9 or 6-11 game. Tray Woodall is poised for a big weekend in leading Pitt to the Sweet 16 with wins over Wichita State and Gonzaga. Hitting nearly 50% from the field for this season, Woodall has double-digit scoring in every game since the end of January. By and large, this region is poised for the big day on Friday, not the opening day.

Finally, we have the East. I do not think Bucknell pulls the upset over Butler, but how can you go against a center averaging 19 and 11 during the season? That is what you have in the Bison’s Mike Muscala. Or how about freshman forward from UNLV, Anthony Bennett, who averages 16 points and eight boards. Finally, while I think Davidson loses here, never underestimate the Wildcats and longtime head coach Bob McKillop. And look out for Davidson’s De’Mon Brooks and his 13.8 points and six rebounds a game.

I think this will be the year of the centers and forwards and watch teams ride the big fellas to wins.

CHECK OUT THE V.I.P. #2 Which is on Sale for $50 during the March Madness Tournament if you want Daily College Fantasy Basketball Teams to make this March Madness a March to remember.