The Seahawks. A team that has featured RBs power Running Backs like Shaun Alexander and Marshawn Lynch over the last two decades. Is there room for Eddie Lacy to add to the legacy?

Michael Bennett/Cliff Avril/Frank Clark. Three guys that can get to the QB with no problem at all. Rubin eats up the middle of a field like a Reuben sandwich. Great D-Line.

Bobby Wagner and KJ Wright are superstars at LB. Pencil both in for the Prow Bowl already.

The L.O.B of Sherman/Kam/Earl will remain intact for now. Deshawn Shed and Jeremy Lane have stepped in big roles over the last couple of seasons.

All in all, this Seahawks Defense is not just good, it is BEAST. It is hard to run on them, it is even more difficult to throw. Seahawks have had a Defense that has led to a Fast Track Head Coaching Job left and right.

First thing is first. This offensive line was garbage coming into last season, no expert claimed that would be the case or even concerned. Beside myself. I even made a video about how the Dolphins D-Line would crush Wilson Week 1. Wilson ended up hurting his ankle which ruined his running ability all season long.

So now we must see, do the Seahawks have a good O-Line this year?

Short answer they improved, long answer let us first see how they do during the Preseason. They added Luke Joeckel from  Jacksonville the 2013 #2 overall pick, but the Jaguars O-Line was really bad last year. Besides adding Luke, they are switching players at different positions and maybe giving their 2nd Round Pick a chance to start at guard. Russell will not be comfortable, but at least Justin Britt returns.

Russell Wilson (QB 2) should always get his fantasy numbers. Most of the time he is too inconsistent with his passing numbers to be a BEAST DOME QB. Doug Baldwin (WR 1) no Expert Ranked him higher than myself the year he broke out 2 years ago is an obvious unguardable weapon. Baldwin should have a BEAST season as him and Wilson are on a page that no team can stop.

Jimmy Graham (TE 1) was a factor last year and built off of his success he had with Wilson towards the end of Year 1 they were together. Some may know it as Silence of the Graham, but if you bounced on him in Year 2 like I did and the BEAST DOME NATION, you were rewarded.

Jermaine Kearse, Tyler Lockett, Paul Richardson, those guys have been there a lifetime it feels like. All Waiver Wire.

Running the ball we have Fat Eddie Lacy (RB3/4). No matter what weight program they say he is on, Lacy has a lot to prove during the preseason if we want to say he is in shape. The Seahawks O-Line is not that talented, and the Seahawks contract for Lacy is very incentive base, so if he is not performing they will not play him. Thomas Rawls (RB2/3) is a much better, much complete back. He is also familiar with his role and Russell Wilson knows what he is getting with him. Lacy is more of a changeup slow knuckleball that just moves from left to right over the middle, not going anywhere quickly. Rawls is electric and he is the RB you want of the two.

Not to mention C.J. Prosise is still on the roster and could easily be the 3rd down RB, and likely best player for the spot.

Let Russell throw the ball 40 times a game in Shotgun. Have him roll out and let him run or make quick throws. Thomas Rawls will be a good HB Draw Cut and Go type of player, Eddie Lacy will be there for Rawls when he needs to take a breath. Only one. Baldwin and Graham should be machines in the quick passing game, Wilson will get his numbers.

Only problem with all this is their OC Darrell Bevell. By now everyone on BEAST DOME could choke out Bevell and probably never want to deal with him again after watching all the Touchdowns he stole away from Marshawn over the years, or how he ignored Graham the first 8 games of 2015.

For now ignore Rawls unless he really falls, I do not expect him to be part of the Strategy but I can surprise myself.

Doug Baldwin makes for a good candidate on Draft Day if his price slips.

Jimmy Graham makes for a good candidate on Draft Day if his price slips, still we are going with Martellus at TE.

READ ALL TEAMS SIGNUP FOR A BEAST MVP PACKAGE TODAY 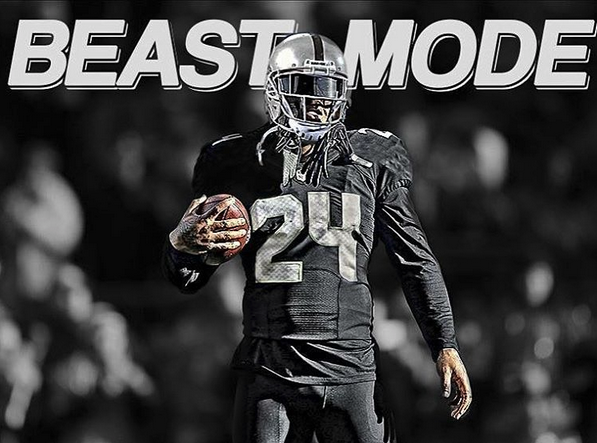