FANTASY NBA BEAST OF THE NIGHT:

They See Me Browing (Anthony Davis)

When I first started this segment I said I would only do to win $100 Wagers. Bovada fails to take into consideration matchups and injuries and just throws out the Average of the Player and says over/under. Tonight lets BEAST the System again.

With Omer Asik out, the Pelicans are rolling with Anthony Davis as the starting Center and basically only way this team can win. Jrue Holiday is not playing as well tonight, which will mean extra PT for Anthony Davis on a back-2-back as they need his offense more than ever.

The matchup against the 6’10 Zaza Pachulia is just what the Anthony Davis Doctor ordered. Pachulia is not in the same classification of a player like Davis. Zaza is well past his prime, plays well below the rim, and is not a huge threat to score over 10 Points. Look for Anthony Davis to get a lot of boards early, and often.

11/7 MUNTRADAMUS PLAY OF THE DAY 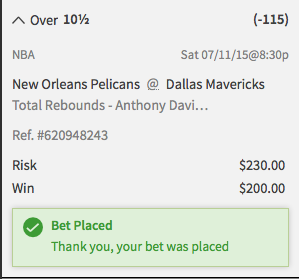