By James Dalthorp
BEAST DOME NATION.
We are back at a more traditional stop this week on the PGA Tour and it’s a good time to see what players are bringing to the table since we are just far enough into the new season that the veterans are a bit warm and the young guys are getting comfortable. Some would even call it a “checkpoint” heading into the new format and schedule of this 2020 PGA TOUR season.
Like the AT&T at Pebble Beach, they will alternate courses this week during rounds one and two here at Sea Island. One of the main courses here for professional action, the Seaside and Plantation Courses will have plenty of natives in the field who call this area home. It’s a tournament with a little less history than others like the Heritage – but still a staple event for the state of Georgia.
Davis Love aided in the recent redesigns to this Rees Jones layout – which is starting to look a little more like Pete Dye’s Harbour Town Golf Links (my personal favorite golf course) around the green complexes. Love even said that Dye made some suggestions to him (Dye also well known for the Players Championship’s TPC Sawgrass – which was the most notable event moved in the regular schedule 2 years ago). It’s not a friendly format if you miss greens – but rest assured, players can get away with less than perfect driving off the tee. It will be all about the approach shots – and I’ll take a good scrambler here any day. It will be difficult, even for the best in the world, to be in the bunkers all day here.
With that knowledge, I’m going to place a high emphasis on scrambling this week and I’m also going to give mum more of a nod to the locals who have good history in this events 10 year history. Here’s my picks:

leads in career earnings at this event and last year he shot 63-65 over the weekend. You have to put Kisner in your lineup this week because of his consistency here. He has four top tens and won his first PGA TOUR event here four years ago. I think he’s due for a win and despite his average performance lately, I respect his schedule. He’s played a very dynamic schedule so far this new season – ZOZO (T66), HSBC Champions (T28), and then he played a birdie barrage event at Mayakoba (T76). He’s warmed up.

If you’ve ever seen Johnson’s “Playing Lessons from the Pros” TV Show, he filmed it here. This is a local you have to watch out for. Most would think he’s rusty and out of form – but I would argue he’s quietly hot. He opened the Mayakoba with a 64 last week. That should let him know that his engine can handle a road trip. He quietly made 2 million dollars last year in earnings (quietly) and it all started with a T8 finish here. You can bet he’ll be looking to get that win.

Took a bunch of time off and came out last week with a good performance. He finished T14 with a final round 62, similar to his finish at the first Olympics that Justin Rose won. Kuchar is a steady player and this course is just the kind of layout that suits him.

Georgia Bulldog. Coming off wins at the Bermuda and the Mayakoba. Sober for a long period of time and wearing it proudly as a badge of honor. Have to expect Todd to keep that going on some home turf. I’ve actually played with him on a similar layout before and he has a good demeanor for staying patient around a course like this. I’ll put him in the top 10. Playing lights out.

Seven events since Sept 16th with a win at the Houston Open (will be similar challenge to this week), only one finish outside of T18 (last week). Griffin is playing for charity birdies right now and he’s making a ton of birdies. This is a venue he only played competitively once and shot 71-71 (even at that time). I’m taking a bit of a risk on this one – but my gut tells me Griffin’s play last week was indicative of the fact that he plays well on courses where it’s more difficult to score. He won with a winning score of -10 in Houston and this event shouldn’t be a crazy birdie fest. I think he’s a solid pick this week.

I was really happy when I picked Boo at the Bermuda Championship and he went out and played GREAT. He missed his first 2 cuts of this new season and then he went T21 and T18 with 3 of his last 4 rounds were 66. He went 66-66-74-66 in Bermuda and if there are some new quirks around this layout, I’ll bet Boo’s stellar iron play can ball strike this place to death. He’s my dark horse
Charles Howell is the defending champion and he’s been playing pretty well. I think he’s a safe sleeper pick – but I think the changes to the course will make it that much more difficult for him to defend his title. 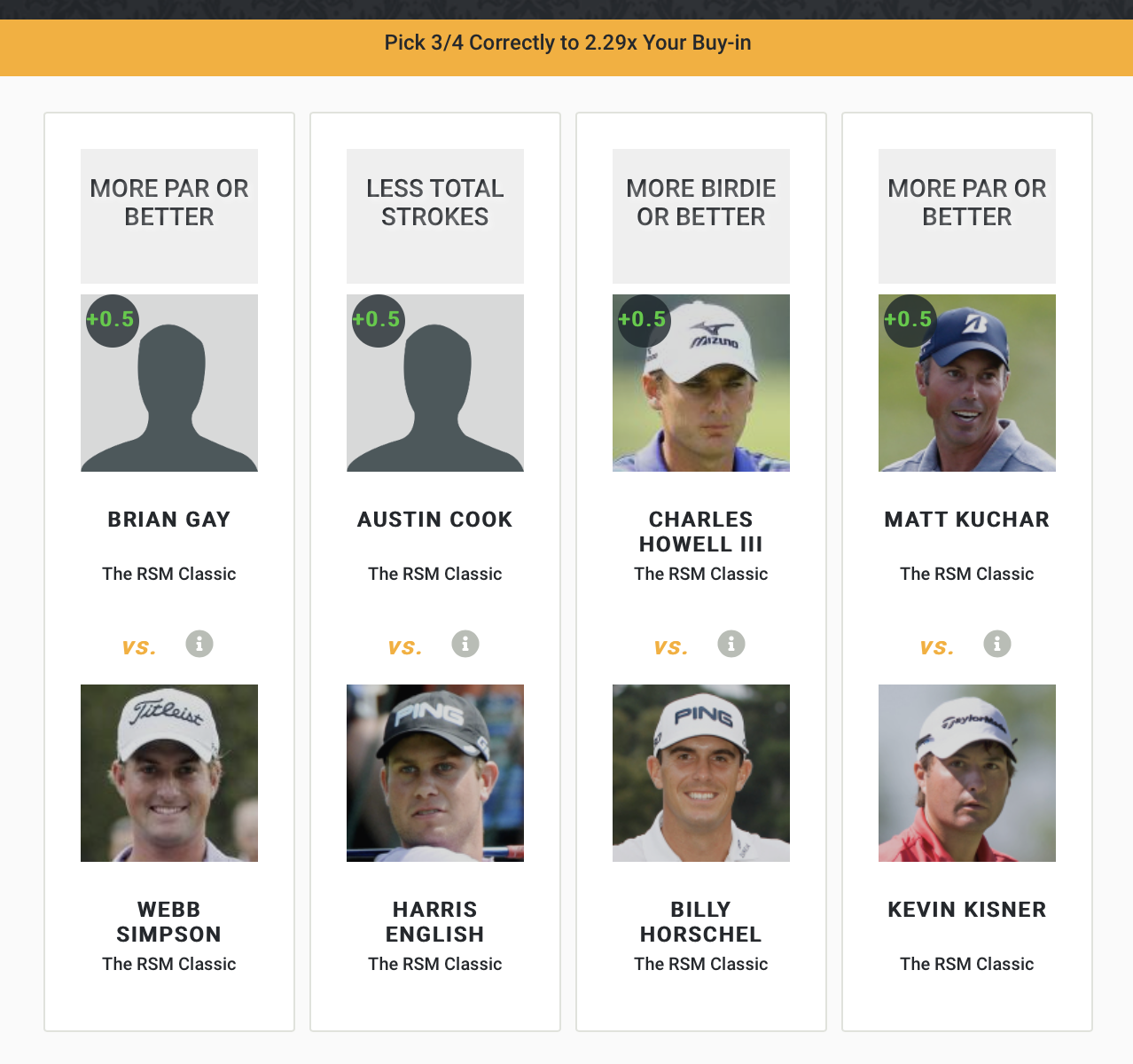 We’ve got a good one here, a rapid fire pick with 3/4 winning the bet.

Webb’s not terribly consistent. Even though his last performance was a T7 in Vegas a month ago, he hasn’t played since. I see a lot of fantasy experts putting Webb in their lineup this week because he’s a local. However, Gay has made a strong case lately. He plays very well by the ocean and has top tens in 2 of his last 4 starts, including a T14 last week where he went 69-65 on the weekend.
GAY

Harris English has been much more consistent than Austin Cook. I think if you gave cook 2 shots, English would still cover. Top 10 in 4 of his last 5 events and he’s 8th on Tour in greens in regulation. Should be a good week for him.
ENGLISH

This is a battle of consistent players who are both accomplished and savvy. It’s definitely the hardest of the 4 to decipher. Even though Charles Howell is trending in the right direction, Billy is ranked 32nd in the world. Howell is ranked just outside the top 50 – but he’s been extremely consistent. Horschel has two recent top 10’s and his Mayakoba performance tells me he’s on point. He went 66-68 on the weekend.
HORSCHEL

Matt Kuchar is coming off a super hot round of 62. So I think this one is a no brainer. It’s hard to follow up a super low round with another one. That’s just how it goes. Kevin Kisner should be ready to go at his home turf where he won his first event. As much as I like Kuchar getting the push, Kisner should be the favorite here.
KISNER