Alright golf fans – new week in store and we’re already well on our way to an exciting finish to the year 2019 and a nice way to kick start things back in home territory (sort of). After some very exotic locations and venues at new events, we are back at El Cameleon in Playa del Carmen, Mexico. This is the “silly season,” mid November swing that isn’t quite as casual – but still offers enough of a reprieve that we see a lot of great players flock to the Mayakoba Classic to pick up a late season win. And they are starting to come in bunches.

I’m a little partial, but I think the coolest win that’s ever happened since 2007 here was the win for Pat Perez in 2016. I think his victory stands out because Perez is a very respected player. A great ball striker, a fun personality, and yet he went many years as a journeyman – often in-between tours and having a tough time finding his way as a permanent PGA Tour member.
His -21 score was the lowest total for 72 holes here until Matt Kuchar broke it with -22 last year. More on Kuchar later in my MKF picks. Past champions here: Funk, Gay, Wilson, Beckman, Wagner, Huh, English, Hoffman, Perez, McDowell, Kizzire, Kuchar.
There’s only one major champion on that list – McDowell in 2015. I think after he won, the following year saw a great boost in the quality of the field. That year, 2016, was when Perez broke through for a victory that has solidified him as a force to be reckoned with. I think that’s what we will see here – during what many still treat as their off season time and leading into the holidays, the Mayakoba offers a chance near the U.S. to enjoy some good weather in Mexico and capitalize on a time of year that eludes many from their peak performance.
For fantasy this week, that means there are great opportunities for guys that might not be getting their due – and are just on the verge of breaking through. There are plenty of those players here this week! Instead of jumping into the course, I’ll break down my top picks and explain why this course suits their style (it’s one of the better scoring opportunities on tour, so there’s not a lot to analyze).
One of my friends, Roland Thatcher of Houston, actually has the course record here – a 61 during the Mayakoba in 2008. Roland is a very good ball striker and is a great short iron player. He plays well on courses that have a lot of water. If your fantasy picks fit this bill – go for it!

As you can see from the past champions list, this tournament provides players of all talent levels with a level playing field because it’s a course that yields plenty of birdies – but also requires a strong level of grinding and ball striking to finish the job. No player is more underrated coming into this event than Abraham Ancer. He was just selected to the International Presidents Cup team – and that, in his own words, “meant the world to him.” As far as momentum goes, he is going to be a force to be reckoned with. The 28 year old is looking for his first PGA TOUR win and I think this is an absolute perfect place for him to do it – especially with that Presidents Cup on the horizon. Another reason to love his chances: he’s from Mexico. It would be the best story, indeed. He had a breakout season this past year and came close many times. He also started round one last year with 65 and finished top 25 with a cruise control weekend. So he knows the drill.

Once again, there are only a few Presidents Cup players in the field this week. Hadwin, Day, Finau, Niemann and Ancer are the only Pres Cup players from both sides teeing it up this week. Finau has been a little rocky of late but I think this course suits him well and he’s going to be tough to beat because of his length off the tee.

Another Presidents Cup pick here. Niemann is one of the hottest players in the game. He’s making a ton of birdies and his short iron game is very strong. Definitely in a must have in your lineup. He’s been playing a lot more than most of the guys in the field and is definitely due.

After the Bermuda Championship, Scheffler should be a lock. He was in contention and put on quite a show. He’s got plenty of game and has been giving himself a ton of opportunities to win. The Texas native should feel at home in Mexico and he’s got to be hyped about the state of his game. I think he’s a few tweaks from a win.

Denny proved me wrong in the first round at the Bermuda Championship. I think if you are on the border of picking him or not, pick him. He’s obviously a trending name. My concern is that his ball striking is extremely poor – in fact, I think he’s one of the worst players from tee to green out there on tour right now. However, watching him roll the putter has made me a believer. He is the next Brad Faxon. He makes everything and makes it look easy. Can’t rule out the hot putter. I’ll take a hot putter over a great ball striker any day.

It has become quite a story that Kuchar did not take care of his caddy the way he should have after his win last year here. Even after making it right with a 50k check, it doesn’t quite seem like he’s gotten that monkey off his back. Coming to this event may leave him with mixed feelings and crowd reception. However, I think we all know that Kuchar plays the “nice guy” card but is a heck of a competitor. Although nobody condones how he dealt with that situation and he has since apologized, I don’t think it will effect his consistency tee to green. Where Kuchar tends to separate himself from the field is when he’s making longer putts. He’s a safe pick, but I don’t have him winning.

Danny Lee was runner up last year and has been playing in good form. He tends to be very inconsistent, so it should be interesting to see how this one plays out.
Jason Dufner is making his return for the first event since Houston about a month ago. I think he’ll be in good form since he is fresh. Certainly worth the gamble.
Not a big fan of Jason Day this week. I think he’s a bit out of sorts. Again, I worry that he’s pushing his back too hard leading into a team event. Wouldn’t surprise me if he WD’s.
Hovland – I think the prodigious Norwegian is just a little off. Since he broke the Tour record for rounds in the 60’s, he’s gone a bit stale. For that reason, we all know just a little bit of a difference in a certain part of the game can throw you off – and I think he’s working through a little bit of a swing cue. Maybe it’s nothing – and I wouldn’t say he’s in any sort of slump – but he’s been playing SO well that some of his rounds lately suggest he might be just a little burned out. He’s a young player whose expectations must be through the roof. I think we need to unplug him for 10 seconds and then plug him back in  during 2020. The electricity is a little low. 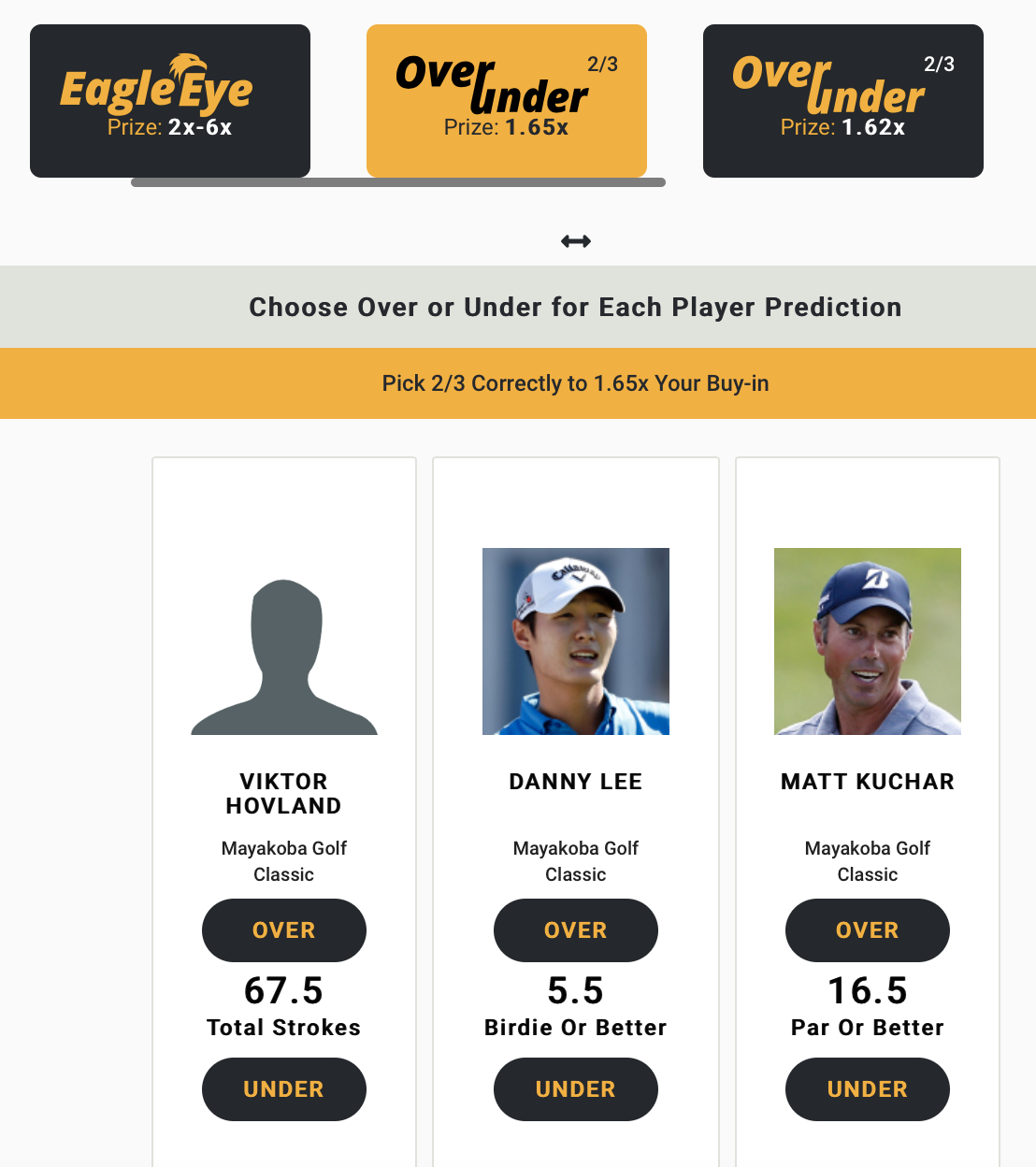 VIKTOR HOVLAND 67.5 OVER UNDER – OVER

I’ve got Hovland over 68 to start round one. He’s a real consistent guy with 69’s all over the board but I just don’t think he’s going to go low on a course that he’s not real familiar with after this period where he’s started to show signs of mortality. He’s been red hot for a while and I think he’s cooled off some. Round one will definitely test his patience here.

DANNY LEE 5.5 Birdie or Better – OVER

Disclaimer : I’m not a huge Danny Lee fan, just because of his game. I think asking him to make 6 birdies in a round is pretty extraordinary. Think about it – even though he’s a long hitter – you’re going to see him reach 3 par fives at Mayakoba in 2 a round, fine. But then you need 3 more birdies from him for a lock. Not going to see that out of him unless he’s on fire. Given, his play at the CJ Cup was great. But this is Mexico. Don’t see him lighting it up. Just my gut.

I’m taking the OVER AGAIN! And this one is just a fact – you don’t bet against Matt Kuchar when it comes to making pars. He’s as consistent as it gets. And since he is the champion from last year, it will be hard to get him into a funk. Someone will have to make Sizzler and Red Lobster comments down every fairway to get in his head. Trust that, as I noted, he doesn’t make mistakes with his long clubs that often. If something goes wrong, he’ll miss a few putts. Don’t expect bogeys, even if the sting from last year’s caddie drama comes to the forefront. He’s an even keel dude. In fact, the whole situation might motivate him more than anything.