I had some really nice epiphanies watching today’s round in Honolulu. Watching the leaderboard fluctuate with the wind, I made a few comparisons to the way this golf course played and some other tour events.

Much like the Honda Classic, the Sony Open can become a demanding event when it comes to keeping the driver in play. Most of the time, the wind is not such a huge factor off the tee but here at Waialae, those sharp doglegs are the character of the great par fours.
Much like the tumultuous winds that can come up in Florida at the Bear Trap, Waialae offers it’s own challenge because the greens are a bit smaller (although there’s basically no water on this track that can snatch a ball). Many players, like Rory Sabbatini, who tend to play well in those conditions, took advantage of day one.
Hats off to Morikawa – his 65 puts him off to an unprecedented start. However, with more benign conditions tomorrow, that could change very quickly. I’ll show you two of my best submissions right now Fan Duel and DK
A few guys that I wasn’t afraid to put in my lineups this week: Jerry Kelly, Ted Potter Jr, and Keegan Bradley. I’m counting on all three to stick around here. I know they are probably very low odds to win, but their veteran experience here plus the strong conditions bring out the true Sony fans. These three guys really enjoy this course, Kelly even socializes with the members after the round! He’s a very notable past champion.
I expect a lot of fluctuation tomorrow on the board – and I made a lot of notes about some of the new rookies and the state of some of the veterans. On that note, let me move on to my Friday picks on MKF and Prize Picks 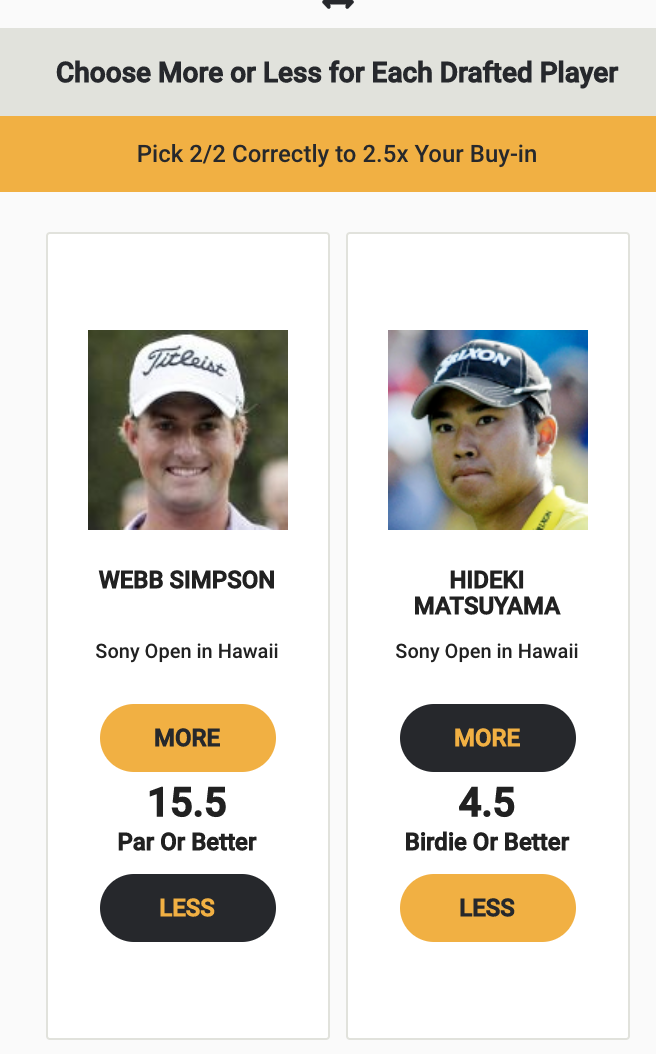 This one, to me- looks like an absolute lock. Now, the windy conditions could be a factor on this one. But I’m used to seeing Webb Simpson make a strong Friday move. For him to make more than 2 bogeys out there would be a big upset in my mind. He really controlled the irons well today and he hit plenty of fairways in the middle stripe.
Meanwhile, Hideki Matsuyama was awful on the greens today. For whatever reason, his track record here is just atrocious. For his talent, he is the most overrated guy on the board. Sell his stock at the Sony. After today, he is officially on this track’s side. He had some horrendous shots today. This place just doesn’t fit his eye and he’s got a BAD PULL going with his putter. That’s not an easy fix. He relies heavily on a metronome timing. It’s off right now. Abort.
All that being said, I’m confident Webb will put up a 67 or 68. I would find it highly unlikely he has 2.5 + on the dark side of the scorecard. Matsuyama, meanwhile, would need some serious help to make more than 4.5 birdies on the scale in my opinion. He needs to spend all night at the putt putt course with Chubbs. 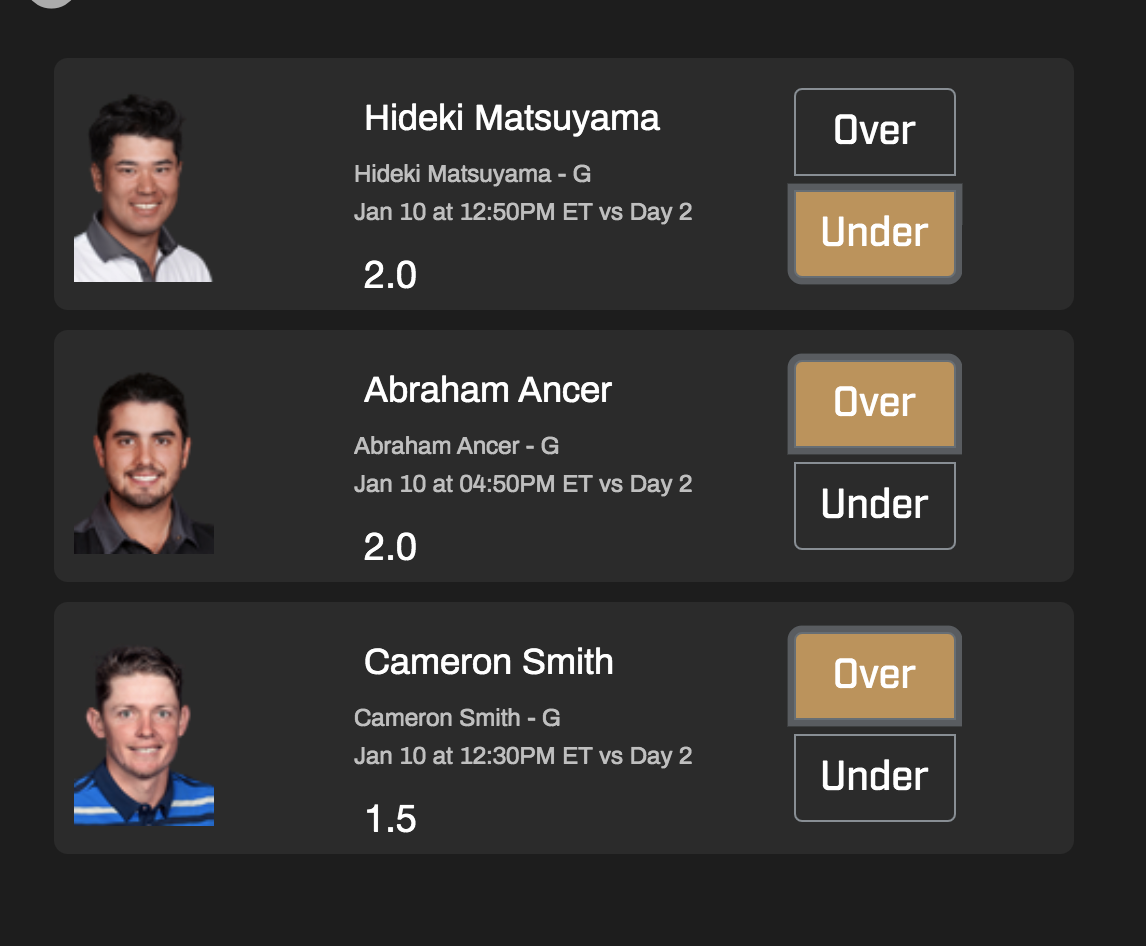 Ancer quietly LIT it up today. He had an eagle and 4 birdies – which means if he was bogey free, he would have the lead. That’s saying something – and even though you can always play the “what if” game, the face that ancer scored so nicely on day one suggests that he didn’t need to warm up for this event. His scoring clubs are ready – and as he adjusts to the wind and gets rid of the bogeys, he’ll be quite dangerous. I have him in many of my lineups and I expect him to win or top five. Only 2 birdies would be a disappointment.

Smith is playing for birdies in his hometown land of Australia – and since Neil Wilkinson, Leishman, Matt Jones, and other Aussies prevailed in the wind today – I expect Smith to carry over his experience in the Presidents Cup. He will have a better round than he had today or I would be shocked. He is playing solid golf. With two easily reachable par fives, he’s in the driver’s seat and I expect him to be in the top 25 like last year at worst.

You can read the MKF analysis above on Matsuyama.