THE BATTLE OF #1 DRAFT PICKS

When you are a QB in college, and you turn into the #1 pick in the NFL Draft the following season. It is safe to say the team is investing in you as the face of the Franchise. If the pick does not work out, not only are you a huge flop, but so is the Franchise.

Look at what happened to the Raiders since 2007 when they drafted JaMarcus Russell with the number one pick. Raiders are finally getting into the contender hump. Tim Couch for the Browns in 1999, they finally have become a good team thanks to their #1 pick in Baker Mayfield 2018. From the Texans taking David Carr in 2002, to the Bucs taking Jameis Winston in 2015. If a team takes a flop at QB, there is going to be a rebuild period. Or you just sign Tom Brady in Free Agency.

Both the Bengals (2019 Burrow) and the Jaguars (2020 Lawrence) have #1 Picks as their QBs, and the two most recent. Joe Burrow has showed us early on in his NFL career that this guy is the real deal that can keep his team competitive. However a poor offensive line is something that always will have Bengals and NFL fans worried for his career. At least this stage of it until the Bengals invest in their O-Line to protect the Franchise. On the other side, Trevor Lawrence.

When I watched tape of Trevor Lawrence in college, when I saw him in the preseason. The first thing that came to my mind with this guy is, Peyton Manning. He has a rifle arm, he commands the pocket with his size. He even has some speed in his step, something Peyton does not have. Now that we are three weeks into the season, the Peyton Manning comparison could be laughed at.

While the skillset is there for Trevor, no doubt about it. The decision-making is at a Jamarcus Russell intelligence. I know I am being extra harsh, but this guy is literally making every bad decision in the book. Throwing off of his back foot often, literally staring down his WRs, and missing the big play for the wrong target. The only thing Lawrence has going for him is his active NFL arm, and above-average speed. Everything else makes you think Trevor Lawrence is a surfer from Malibu who is now a converted QB.

The Jaguars have a tough challenge on Thursday Night going up against the most improved defense in 2021. If you had preseason BEAST and read all the weekly Haikus. I was telling you from day one when they shut down the Bucs and sacked Tom Brady, this defense looks different. Last week they put the icing on the cake defeating the Steelers and making everyone in Pittsburgh call for Dwayne Haskins time.

While the Bengals D is playing great, Trevor always has the chance to show us why he was the #1 pick. He can make throws that nobody else can. He can create with his legs more than anyone would have guessed by looking at him. He really can be a Hall of Fame QB. Yes the first three games tell us the opposite, but if we judged and dismissed Peyton Manning after his rookie season (Colts 3-13, 28 INT, 26 TD) we would have missed out on greatness.

Luckily for the Bengals, the Jaguars secondary has been playing Pro Bowl caliber defense at best. While it would have been nice for Burrow to have Higgins, he can definitely make it work without him. Chase and Boyd are both playing great Football and even though the Jaguars have an underrated front seven, Joe MIxon is running like one of the best RBs in the NFL. 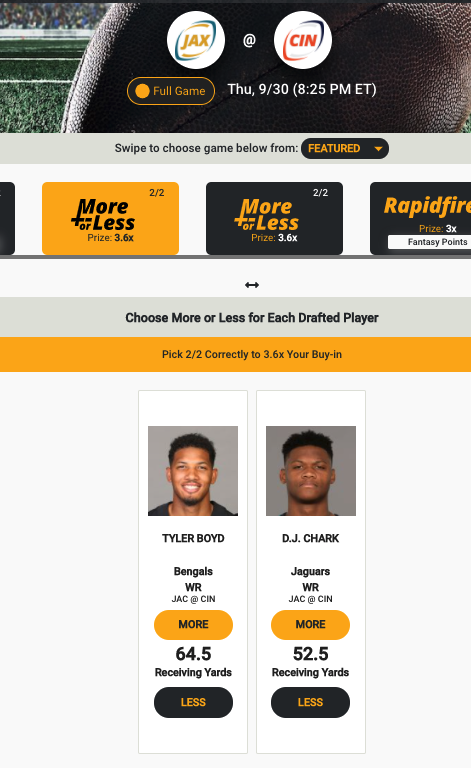 Jaguars Secondary is not going to be able to stop Burrow from making big plays, unless they sell out and give up the underneath. Expect Boyd to soak up a lot of easy yards in the middle of the field.

Chark has definitely not been the #1 option for Lawrence early on. Despite a great TD catch last week, it seems like Marvin Jones has been Trevor’s favorite weapon dating back to the preseason. With the Jaguars needing to step up through the air, Chark can easily claim some big plays to give him over 55 yards.