The Steelers defense has kept this team relevant in 2021. Big Ben is no longer the QB he once was, and the running game consists of Najee Harris running into defenders pretty much as soon as he touches the ball thanks to below average blocking for the Steelers.

The Vikings offense has been hanging by a shoestring mostly due to Kirk Cousins having arguably the most quiet dominant season of a QB in the last few years. Cousins and the Vikings had a terrible loss to the Detroit Lions on the final play of last week, now they need to rebound at home on Primetime TV to save their season.

Vikings may or may not have Dalvin Cook, either way the Steeelers Run D is very strong. Their secondary is very strong as well. Vikings will not have Adam T so that means Cousins will have to get it done with Justin Jefferson who should burn Joe Haden, but a double team is also likely. All in all at home, KIrk Cousins does not look too promising.

The flip side is the Steelers offense. However no Danielle Hunter or Everson Griffen leaves this Vikings pass rush a bit weak. LB core is strong, middle run D is strong, but the no pass rush is a problem. Luckily the Vikings secondary should be able to limit Big Ben with Harrison Smith and Patrick Peterson, plus Woods and Breeland. Expect the Steelers to rely on Najee Harris on the road, especially if the Steelers have any type of lead. A few WR reverses to Claypool and Johnson are also in store.

In the end, if Dalvin Cook plays this game he can be a game changer. Both teams want to keep the ball on the ground and rely on their defense on Primetime TV. 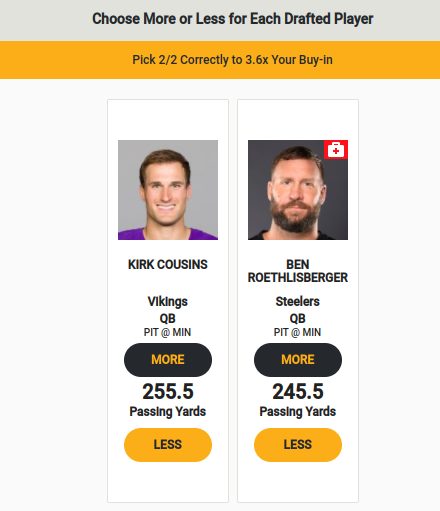 Without Adam T, there is not enough for Kirk to throw for 255 Yards. Justin Jefferson would have to get 120+ because nobody else on that WR core is really due for anything unless they somehow get a big play. In a defensive game with both teams trying to run the ball. I would take the under.

On the road the Steelers will rely on their defense and Najee Harris. Big Ben does have the weapons to throw for that amount of yards, but the Steelers do not need to be in a shootout. If the Steelers have any lead at all, Big Ben will stop throwing the ball.