The Falcons come into this game with a secondary that has not been playing good Football for what seems like a decade. The Front 7 has been dominating, and they have themselves a challenge against a really good rushing attack from the Patriots. Damien Harris cleared protocol, which means a 1-2 punch of him and Stevenson can be expected. Like I mentioned earlier, the Patriots are going to be able to throw the ball against this secondary and that all falls on Mac Jones.

Everyone is already comparing Mac Jones to Tom Brady, and yes there is potential in Mac Jones game however a comparison to Marc Bulger is far more accurate. Look for Mac to find open weapons and look good in a dome. The running game could cash in some easy TDs, for the most part it will be Mac who will do the heavy lifting.

The Falcons on offense are going up against a Patriots Defense that is a bit overrated. We have seen Matt Ryan look good against better defenses than the Patriots at home, however his last performance on the road was horrible and his WR core looks very weak without Calvin Ridley. Jalen Mills should be on Pitts more than Gage to really slow down the Falcons offense. In the end, the Falcons offense will not look as dominant as they have in the past and without Cord Patterson this offense could look just as bad as they did last week. 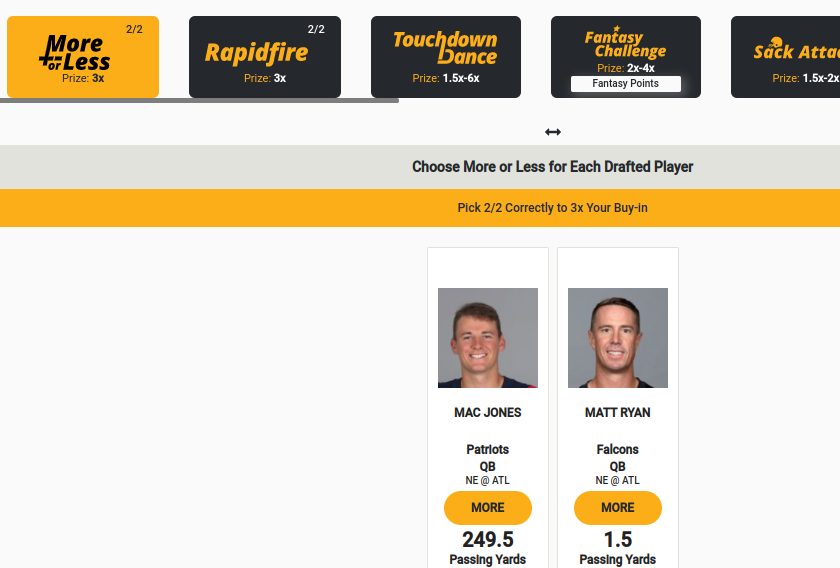 Mac can go off against the Falcons, but the game could be a blowout. If you have a friend who is also playing on MKF you can team up and make sure to make guaranteed money and take the under as well. 3x money, each play $10 for example, you end up with a guaranteed $30 thanks to the bottom play.

MKF giving you this one. Take it as Free money.