IT IS EASY BEING GREEN

Thursday Night Football is back and they bring us a matchup that only people in Houston/Cincinnati, and Fantasy Football Fanatics could possibly care about to watch all 4 quarters.

Andy Dalton and the Bengals, the QB that 1 for 4 John Paulsen told you to draft started off the season with 4 INT, 1 Fumble, and only 170 Passing Yards to go with Zero Touchdowns as he was swarmed by the Ravens Defense. Dalton will go up against the exciting rookie DeShaun Watson, aka Vince Young 2.0 and the Texans. 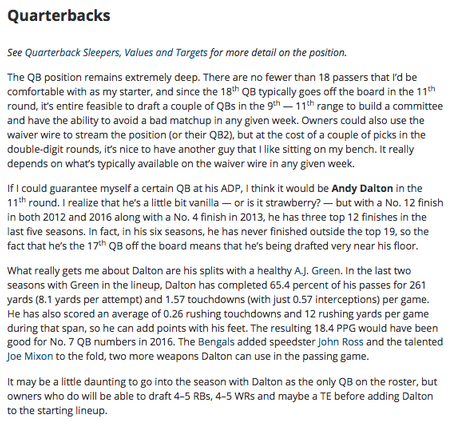 Last week the Texans Defense helped Bortles turned back the clock to 2015, at times. While Bortles did make good throws, he only finished 11/21 with 154 Yards. When I re-watched the game tape of the Texans Defense, I saw a secondary that really cannot control WRs. Allen Robinson was on his way to a major game catching the first pass that came his way, then left with a season ending knee before injury. RIP get better. I expect AJ Green to really shine as a star against that Texans Secondary. Tyler Eifert could make some good plays here and there, but he will be blocking more than you expect from a player of his caliber. The Texans come with a lot of heat on the edge, Andy Dalton does not do well with pressure. Refer to the second sentence of this article.

As far as the running game goes for the Bengals. Flip a Coin, Spin The Wheel, The Bengals have a superstar talent in Jeremy Hill, and Joe Mixon. With Giovani Bernard being born again in this Bengals running game, the Bengals have become a 3 Headed Monster. Starting any of these RBs comes with huge risk this week and it is a surprise Giovani Bernard is not traded to a team like the Giants. The Texans Run D did just lose Brian Cushing which was a huge blow, but they still have enough talent to remind us all that losing Andre Whitworth will come back to hurt the Bengals O-Line. Texans D Line can breakthrough at any time.

With the Bengals offense seeming more inconsistent than anything. Shotgun heavy approach is the only way they can go. The Texans will try to run downhill and protect their Rookie QB on the road. While Watson will look for DeAndre Hopkins early and often like he did in his debut. PacMan Jones returns from his one game suspension, though Dre Kirkpatrick and his long body is a better matchup. Hopkins will have to run a lot of short routes to get open, the Bengals would be crazy not to double team Hopkins who is the only talent they have in the passing game. With Hopkins eliminated it is all on the shoulders of Lamar Miller.

The Bengals Run D is not the best without Vontaze, but they do have a solid Front 4 led by Geno Atkins up the middle. It is not going to be easy for the Texans to be successful, but DeShaun Watson can do things with his legs to control the clock and move the chains.

This is going to be a sloppy game. Bad throws, missed tackles, missed opportunities. The reason the Bengals have the edge in this game is because of two factors.

As long as Andy Dalton does not throw his patent INTs in the Redzone, the Bengals should take care of business.

If there is one Vegas Play to make in this game with confidence besides AJ Green Props considering they are not out of this world.

Get all of my Predictions Game by Game with the DAILY FANTASY VEGAS BEAST PACKAGE. 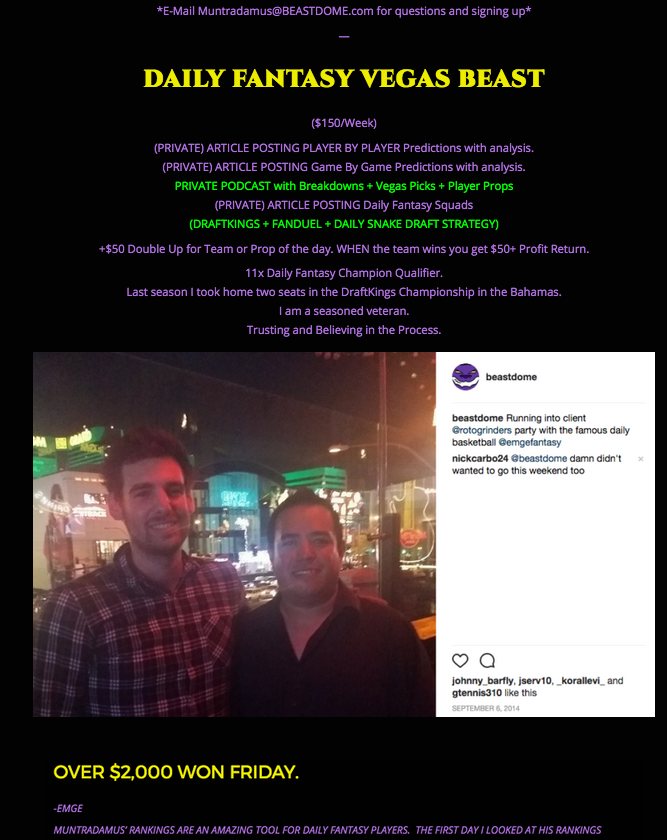