The Giants and Eagles Rivalry is just as big as almost every rivalry in Football. With both teams struggling out of the gate, this game means so much to each of them, we are due to see one of the most hard hitting Football Games we have seen in some time. To make it that much more dramatic, Rain is expected all night through the entire game.

Luckily for the Giants, Saquon Barkley was available at the #2 pick. This guy is one of the most special talents we will ever see. He does not need an offensive line he is that good, the way the guy plants and cuts and explodes is really amazing to watch. The Giants are lucky to have him and even with a semi-bad back, he will take all the touches he can take in this environment.

Not Luckily for the Giants, the Eagles Run D is the best in the NFL, however they are without Ngata this week nor Corey Graham. When healthy this Eagles Front 7 is dangerous, without, Saquon can make some magic happen. The Eagles need to make sure that does not happen, and they can kill two birds with one stone by blitzing very heavily. Which puts all the pressure on..

Eli is doing a good enough job to the point where he should be getting a lot more love than he is. He is far from Patrick Mahomes, he is far from Aaron Rodgers, but he is running the Giants system exactly how the Giants are calling plays for him. He is making solid throws and maybe if the Giants opened up the system a little more, Eli could be putting up bigger numbers.

The downfall to the Giants passing game, is protection. Eli can only read one option, maybe two MAX with the pressure he faces. With the Eagles amazing pass rush, that gap of time he had just got shorter, and with a wet football and the potential of a player slipping on his route, that time gap got even shorter than that. Eli is in for a rough Thursday Night Football, if he had Evan Engram, life would look a lot easier.

The Eagles offense just needs to play smart and not turn over the ball. Janoris Jenkins and Alshon Jeffery is a matchup that Wentz will likely want to avoid, so throwing it to Agholor and Ertz seems to be the best plan of attack. Running the ball with Clement and Smallwood will not be easy, but as long as they move the chains and tire out that Giants D-Line, the Eagles can start to take over. The only thing we know is that the rain and the Giants home crowd is going to be tough on the Eagles to do much.

Saquon is something special, and the Giants are playing some inspired Football. In the rain, against a beat up Eagles, Saquon comes through in the clutch. It will be a close game.

TOURNAMENTS FINISHED IN THE TOP 1% 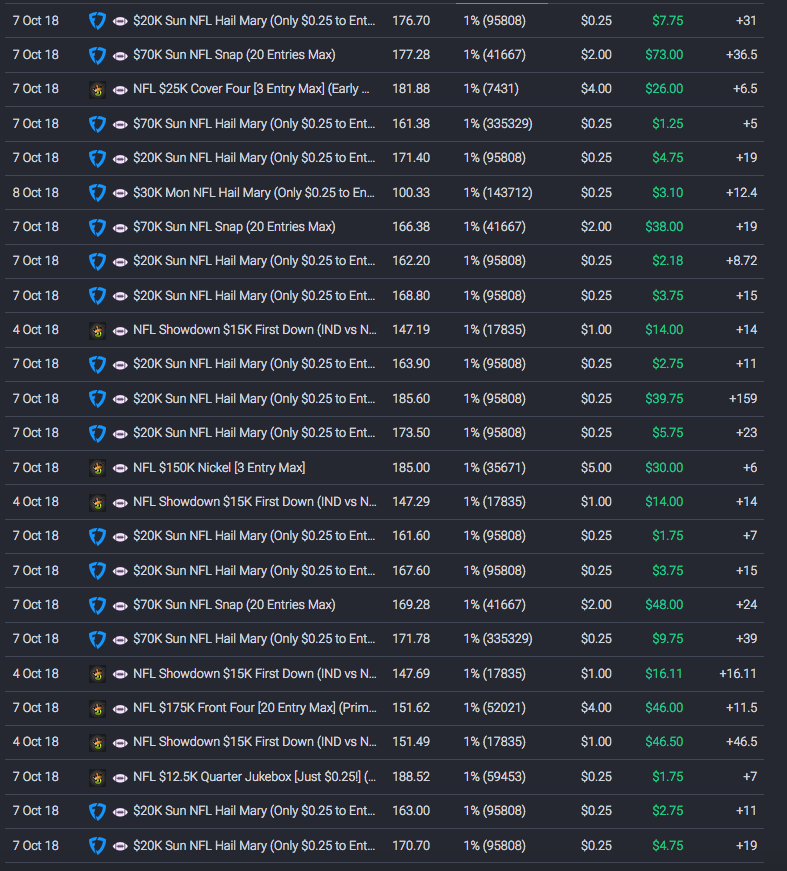