THE EYE OF THE LION

2-3. A record you do not want to be in, but a record that you can deal with. In a 13 Week season, you can really only afford to lose 5 games Max, maybe 6 if you are lucky if you want to make Playoffs. In this case, 5 games is the most I can afford to lose. With that being said, I need to win now.

With my RB core banged up (Jonathan Stewart/Latavius Murray), I gave up my entire budget to acquire a RB who fits my team more than any player can.

If you had the honor of watching Justin Forsett run this season for Baltimore. You saw a RB who was past his prime and about half the speed he was a couple years ago when he truly broke out, following the Ray Rice scandal.

The Lions who are on bits and scraps at RB are rolling with Forsett and givng him his chance to be the guy with Theo Riddick now injured. It is a long season for the Lions at the RB position. Right now Forsett is the flavor of the week, and the matchup is not that bad against a Rams Defense that is not healthy. In Stafford we Trust. In Stafford we Trust. 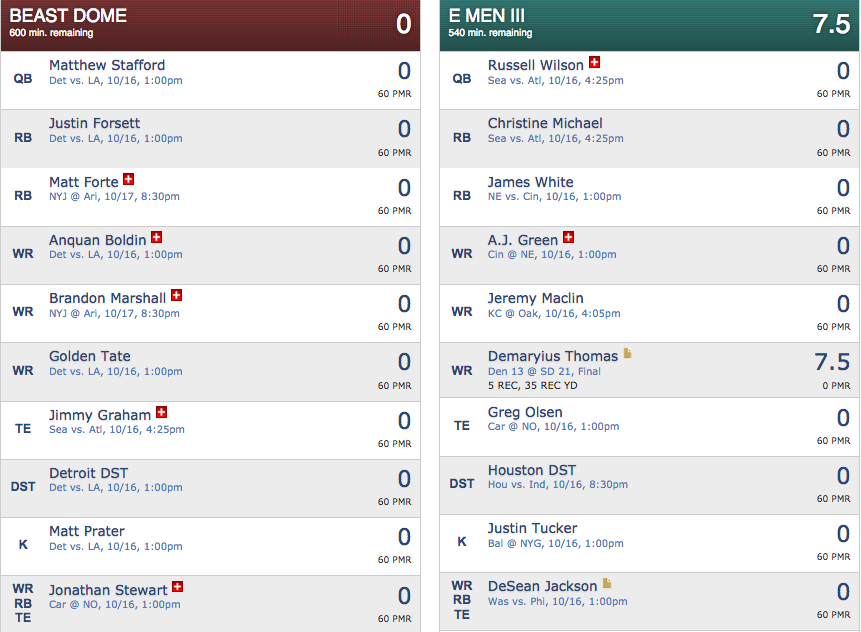 Not going to be the easiest matchup in the world, but I do have an edge. It is Weeks like this it really pays to go with the Dome Strategy.

Seattle game might have bad wins for Wilson. Maclin has bad winds. AJ Green winds will be tough.

The key for me to get the W is the Tate/Boldin combo. I need those two combine for 150 Yards/10 Receptions/1 TD. If those two do that, which they should with ease. Then the W is in place.  With no Riddick or Ebron, those two are going to step up more than anyone. Going up against Demaryius and his 7.5 is a lucky break.