We were all there together for the Marshawn Lynch injury last season. Were were all here together once again for the Adrian Peterson injury. Back-2-Back Years of losing a Top Pick is never a good thing, and it only hurts more when you lose by a fraction of a point on the week of an injury.

Moving forward, I had to drop Adrian Peterson. I need to win now at 1-1, I need to use that roster spot for something useful. After cutting bait with Blair Walsh now that there is ZERO use for him, I had to pickup another valuable roster spot. So I grabbed my guy in Jared Cook.

While I am tempted to play my new toy in Jared Cook, I am going to play the wait game and see if he can start putting up some nice numbers before he see’s my lineup. Plus I like what I have going with Dwayne Allen this week at TE. Despite all that I have myself a very tough matchup in Week 3. 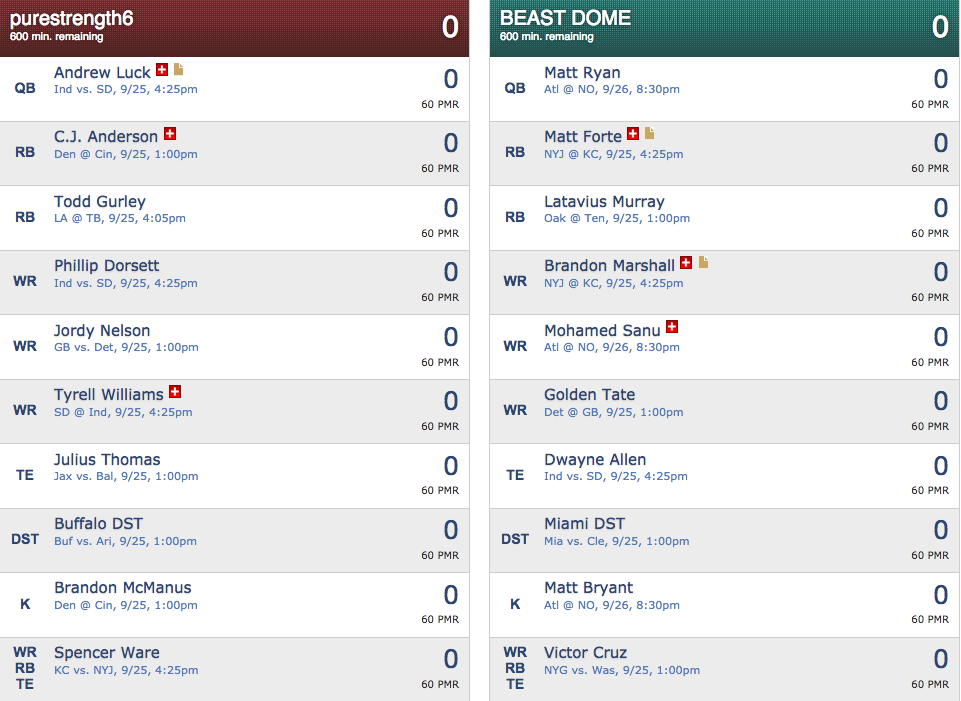 I am not playing Andrew Luck on a good Week as he is hungry for the Colts first win of the season. He also has my BEAST of the week in Phillip D. The Ex-Factor this week and the player I am going to spotlight is.

Before the NFL season (3 months ago) I said to draft Matt Stafford and Matt Ryan. One of the reasons I had these two paired up is because of this Week 3 matchup right here against the Saints.

While Stafford is not going to have a bad week at all going up against a Packers Defense that has a lot of injuries. You have to love Matty Ice in the Dome on Monday Night Football while Stafford has to deal with some 15mph winds and light rain. In the end, Matt Ryan is the #1 QB in Fantasy Football and has a great matchup to keep that momentum. If you need to be reminded of the world famous video you all should have watched, here it is again.